Nicki Bluhm and The Gramblers, plus Ryan MacEvoy, Broken Water and music for a black sun 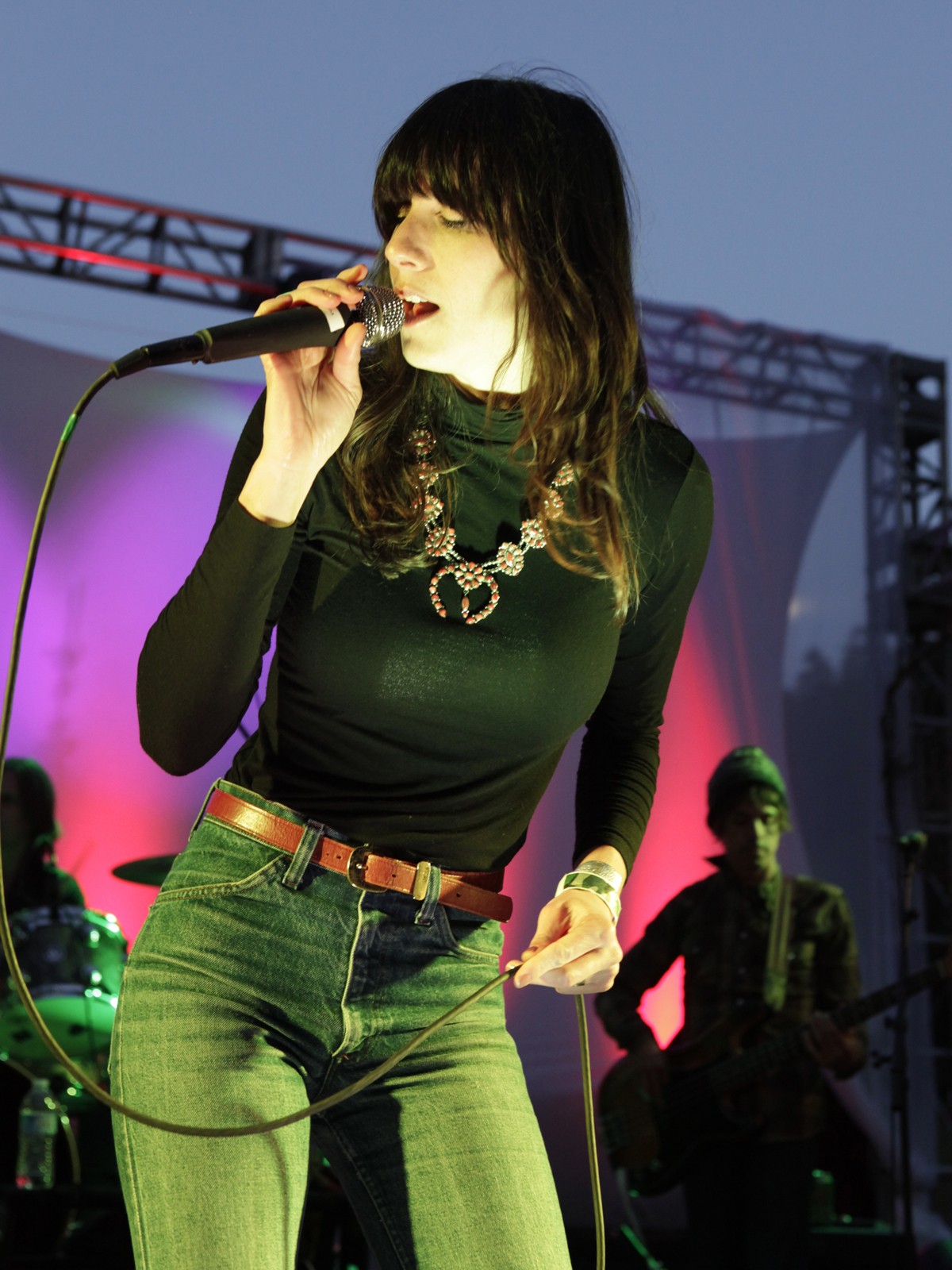 What makes something "go viral" and bounce exponentially around the Net garnering countless tweet pointers, Facebook shares and millions of hits? It's hard to say. One thing's for certain, that word, "hit," has taken on a new meaning. Marketing departments everywhere are trying to figure out the formula, since going viral has become a mark of success and can serve as an instant career boost.

Take for example something that happened on the Journal website earlier this year. Our Google Analytics watcher Andrew Goff noticed an unexpected traffic spike in connection with a Bad Kitty show at the Red Fox featuring Sarah Blackwood from the Canadian psychobilly band The Creepshow -- oddly, a show that never happened. It was cancelled because of a little video Ms. Blackwood made with her side project, Walk Off the Earth. The vid shows her and her four bandmates playing a song by the Belgian-Australian songwriter Gotye, "Somebody That I Used to Know" -- all on the same guitar. At some point after she'd booked her solo tour the vid became an overnight sensation: At this point, it has been viewed over 107 million times. With Blackwood's instant career bump, overnight Eureka became too small a pond. But the lingering show announcement, with a pic that somehow ranked high in Google Image searches, brought a measurable bump in our web traffic. The song itself is the epitome of viralness: Gotye's video for it is approaching 210 million hits on YouTube. The song has been performed on The Voice, American Idol and Glee, and Gotye did it on Saturday Night Live -- all within the last couple of months.

While it's not quite at the same stratospheric level, a YouTube vid titled "Hall and Oates -- I Can't Go For That -- Cover by Nicki Bluhm and The Gramblers -- Van Session 17" seems to be going viral. Uploaded in March, it was at 1,205,500 views last time I checked. It's a casual, lo-fi recording, shot with an iPhone in a moving tour van with Ms. Bluhm on vocals and kazoo, a guitarist next to her, a keyboard player in the way back sitting next to Nicki's husband, Tim, who sings sweet harmony and strums percussion on a Martin Backpacker guitar adapted with a sheet of paper threaded through the strings. The song is used as a marketing tool: In exchange for your email address you can get a free download, an offer made via YouTube, where you'll also find links to the band's website, Facebook and iTunes pages.

Fans of the "California soul" band The Mother Hips will recognize Tim Bluhm as that band's lead singer/songwriter. He's still with The Hips, but has been focusing attention on The Gramblers, who have been working on their second album at Mission Bells Studio in San Francisco. Nicki and Tim have become something of a power couple on the festival circuit: They're playing a bunch of fests this summer including Kate Wolf and High Sierra, in both cases doing sets with an alt. Cali-country band called Brokedown in Bakersfield with members of ALO, a project born at last summer's High Sierra.

Nicki Bluhm and The Gramblers will be spending a lot of time in that tour van in the coming months. It brings them to Arcata this weekend for a Sunday show at Humboldt Brews, where I'm sure you'll hear "I Can't Go For That" live and in person along with a bunch of Tim and Nicki's songs.

Aoife Hearty has a sound that's hard to pinpoint. She Irish, from County Laois, but she now lives in Leeds and is part of the Brit neo-soul-jazz/electro scene a la Morcheeba and Goldfrapp. Her band, Rodina, assembled in jamband-central Colorado, features Joe Tatton, keyboardist from New Mastersounds, along with members from Colorado jam/funkband Fox Street All Stars. The guys drop jazzy soul with hints of reggae behind Aoife's delicate vocals. What is it? Decide for yourself when Rodina plays at the Red Fox Thursday.

DJ Red writes to say,  "As you probably already know, the next Missing Links Soul Night at HumBrews is this Saturday. The guest DJs this week are Rickshaw and myself (King Maxwell will be out of town so I'm happily filling his shoes). Missing Link just got pre-sale tickets in, and they're already selling like johnnycakes. Get 'em while you still can. And we all really hope that people will come out early to support the opener, as there's nothing more disheartening to a DJ than playing to an empty room. First record drops at 9." Red's 45-only set will focus on "Northern soul." Ask him what that means.

You'll also find the Missing Link DJ Crew spinning at the Arcata Playhouse Sunday afternoon as part of the big Solar Eclipse Street Festival in the newly proclaimed Creamery District (you'll find more about the eclipse and the street fair elsewhere in this paper.) The festival is an ambitious (free) event with two stages featuring all sorts of dancers: Ya Habibi Dance Company, Chakra Nation Hoopers and Samba Da Alegria, and music: teen rockers 51 Cards, Lonesome Roses, Colin and Cory, The Interfaith Choir, The Big Forgive, and Jan Bramlett just before the sun disappears. Post-eclipse the action moves indoors to the Arcata Playhouse where Absynth Quintet plays to bring back the sun (that part costs money).

Pianist Ryan MacEvoy grew up in Humboldt; local classical music lovers traced his progress as the child prodigy entered the HSU music program as a teen, worked with the late Deborah Clasquin, graduated at the age of 18, and went on to earn a masters degree from USC, with stops along the way to play a concert at Carnegie Hall and record a CD of music by French composer Milosz Magin. He's back in town this weekend for the Eureka Symphony spring concert Friday and Saturday nights at Arkley Center, where he'll take on Sergei Rachmaninoff's technically challenging "Piano Concerto No. 3 in D minor Opus 30." The program also has the symphony performing Mozart's "Great G minor Symphony" No. 40, K.550. If you show up early (7 p.m.) you'll find John Chernoff and Daniela Mineva at the piano explaining the musical structure, historical context and current significance of the pieces.

Self-described "hacker space rock" trio CMKT 4 is on a national tour of "hackerspaces, makerspaces, co-working spaces and fab labs." The trio is teaching workshops on DIY electronics and circuit bending, which involves repurposing electronic gadgets (for example a "Speak and Spell") by messing with the innards to create new music/noise instruments. The hackers are in Humboldt next week schooling DIYers in workshops where you can make your own "Creme DeMentia Contact Microphone" from a bottle-cap, a few wires and some basic electronics. Monday they're at John Haynes Memorial Veterans' Hall in Garberville, where the 6 p.m. workshop is preceded by a potluck dinner (at 5 p.m.). Tuesday afternoon (3-6) they're at the MARZ Project upstairs in the Carson Block Building (517 Third St.) in Old Town Eureka. Both workshops will conclude with some sort of space rock concert.

Later on Tuesday at the Shanty, The Monster Women share a bill with Broken Water, a band from Olympia, Wash. The trio, Jon Hanna on guitar, Kanako Pooknyw and Dillan Norton on drums and bass, is about to release an album called Tempest for Sub-pop sister label Hardly Art. The collection of no-wave/grunge/shoegaze songs, influenced by "Russian punk-rock poets, the ocean, drowning, the Occupy Movement, nightmares, dreams, substances and others," is not out officially until May 29, but the band might have some on the road. If so, buy one. That's how bands put gas in those vans.