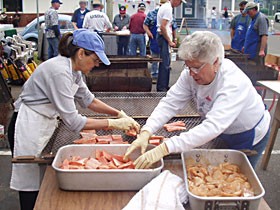 The town may be stretching things just a little bit by calling its big event Sunday "Trinidad's 50th Annual Fish Festival," but we'll forgive it. It was 1957, 50 years ago, when the little port town began celebrating its ties with the fishing and seafood business with an annual event, but it was not called the Fish Festival -- crab was the main dish for the first 15 years or so.

"In the beginning it was George Collins who put the crab feed together," recalled Jack Faulkner, the town's former postmaster and a Fish Fest veteran. "They cooked it over fires down on the beach; it was just a small thing. It started growing until at the end they were doing two tons of fish and crab. Then crab got hard to get with all the storms we had. We did it the second weekend in April and there was a whole series of bad storms in a row. Fact is, Bob Hallmark's boat turned over -- it was too heavy -- he was bringing in crab for us. That was back in the early '70s. It got to where we had to import crab and that was too expensive, so we went to just a fish fry with barbecued salmon and deep fat fried white fish."

Faulk, 72 and retired, has been involved since the crab feed days. He's had the same volunteer job at the Fish Festival since the transition. "I'm on what we call 'the filleting committee,'" he explained. "I didn't know anything about cutting fish or anything, but I was smart. I got Bill Snell -- his father has the Sea Around Us [a gift shop in town] -- I asked if he'd help me."

Bill's name rang bells for me. In the '80s and early '90s when I was chef at the Silver Lining in McKinleyville, Bill's sister, Lore Snell, was one of our waitresses. (Nowadays Lore runs Trinidad Trading Post.) Bill was working for some smokehouse up in Trinidad and would deliver smoked fish we used in various dishes. He'd also bring in whole salmon on occasion, and if he had time, I'd get him to cut up the fish. I tried to imitate his technique -- he was a surgeon with a filleting knife, able to separate every ounce of flesh from the bones; I was always a butcher in comparison.

Bill still volunteers at the Fish Festival, working with John Calkins cutting the salmon into steaks while Jack deals with the white fish fillets, portioning them with a scale he sets up every year and cutting out the occasional bones.

"Bill and John have been with me forever and a day," noted Jack, praising their skill at fish cutting and portion control. "They back the salmon," he added, "otherwise the skin sticks to the grill and we have a helluva time getting it off without tearing it up."

That's another area where Bill's expertise comes into play. I tried to learn his method for "backing salmon," essentially skinning the whole fish with a deft pull in just the right place, but it's a fine art -- I never got the hang of it.

The skinless salmon is dipped in a special marinade (we'll get to that in a minute) and cooked to perfection on a collection of barbecue grills crafted from 50-gallon drums.

For years all of the white fish was battered and fried -- essentially it's fish and chips without the chips -- but that's changed, said Jack. "About 10 years ago we went to barbecuing [some of] the white fish too. The deep fat fryer couldn't keep up with the demand." (While he did not mention it, the grilled fish may be preferred by some as healthier in terms of fat content.)

The white fish has its own specific marinade, which helps prevent the fish from sticking. If you've tried barbecuing delicate fish like cod or rockfish (often erroneously identified as snapper or rock cod), you know that it tends to stick to the grill. The Trinidad solution is a custom, grill-sized wire mesh contraption that allows for flipping a full grill load all at once.

And these folks grill a lot of fish. "We use somewhere around 900 and 1000 pounds of fish, usually more salmon than white fish," said Bob Lake of Katy's Smokehouse of Trinidad, seafood suppliers for the Fish Festival. (Bob and his wife Judy also currently employ fish surgeon Bill Snell.) "The white fish could be rock cod or ling cod, both are delicious. We try to get local fish, but we have severe restrictions here and at this point it's just not available."

Without getting into the politics (again) we'll just say, such is the nature of the local fishing industry. It's not that there are no more fishing boats docked at Trinidad Harbor. "There are still one or two," said Bob, "but they usually have customers they fish for all year and they have quotas on how much they can bring in. If they have enough I'll buy some from them, if not I have to go to Crescent City, sometimes Oregon. And we've used Alaskan cod, which in my view is an even better fish for fish and chips. It's what they call true cod, or Alaskan grey cod. It tastes almost exactly like North Atlantic cod. It costs a bit more, but it's better fish."

Cost is a definite concern. The price for dinner is kept relatively low. The festival is not exactly designed to be a big moneymaker, but there's certainly the hope that they'll break even.

"Right now salmon is out of sight," said Bob. "I could not buy salmon for the festival today, or last week -- it's so high. We're hoping the price will change a bit in this next week. One way or another I have to come up with salmon. We have to offer both kinds of fish. We have a lot of resources -- you know Katy's has been in business close to 80 years. I pretty much know who's got salmon and where it is. Just today I've been in touch with maybe a dozen people who land salmon. When it comes down to the wire, I'll pull the strings to make it happen."

If you read the column here a couple of weeks ago about wild salmon and were perhaps wondering what they'll have in Trinidad, well, I'm guessing someone would be walking the plank if farmed salmon was even suggested.

That marinade? Jack has just a vague notion about it, only knows it has oil and vinegar in it. Bob knows a bit more: His neighbors Kamila and Terry Huff bottled it for a while as The Pride of Trinidad, and Katy's sold it.

"It's a great marinade, but it's a mystery," said Bob. "It's one of those top-drawer secrets. I don't have the recipe, but it's sort of like an Italian salad dressing with brown sugar in it. You'd have to ask Kamila."

While Kamila was not totally hush hush about the concoction she once marketed, she was not quite ready to give out the exact recipe with detailed proportions. However, she did supply a list of ingredients: oil and vinegar -- specifically canola oil and a white vinegar, either distilled or white wine -- brown sugar, salt and pepper, garlic powder and, something that may be the secret, celery seed. That's what's used on the salmon. The white fish marinade is a little different. "We wanted it to stick to the fish better," said Kamila, "so I added a bit of tomato paste." Sorry, you'll have to figure out the proportions on your own.

Trinidad celebrates the golden anniversary of its Fish Festival on Sunday, June 10, from 11 a.m. until 4 p.m. on Trinity Street, the main drag in Trinidad. And it's more than just a meal. There's your basic arts and crafts fair, tours of the lighthouse on Trinidad Head, a Coast Guard helicopter hoist rescue demonstration at noon, a photo and essay competition on "reDiscovering Trinidad."

Hyperactive youngsters can bounce off the walls in the inflatable "bounce house" or those with a touch of nostalgia can try their hand at an old-fashioned fishing booth, where, unlike the ocean, everyone goes home with something (most likely a plastic bobble made in China).

Do you wanna dance? Sundance Nance and her line dancers are there and there's dancing in the streets to music by Secret Club (at 11 a.m.) and Vintage Soul (at 1:30 p.m.), both playing classic R&B. The Pilot Rock Ramblers (with Bryce Kinney) get twangy at the Trinidad Bed and Breakfast. Meanwhile over at the Trinidad School, the All Seasons Orchestra plays selections from the (more serious) classical repertoire, and Sandy Olinger's McKinleyville choirs sing in Trinidad Town Hall at 3 p.m.

Of course all of that is just diversion -- the fish dinner is central. Did I say it's relatively low? Scratch that: It's an amazingly good deal. A barbecued salmon dinner (8 oz. of wild salmon) is just $13, deep fried or barbecued whitefish $10, a combo with some of each $11, all with slaw and beans on the side; $1 off for seniors, kids under 12 only $7. For more information on the festival or particulars on the reDiscover Trinidad contest go to www.trinidadcalif.com .