Gone to the Dogs

The quest for the perfect hot dog 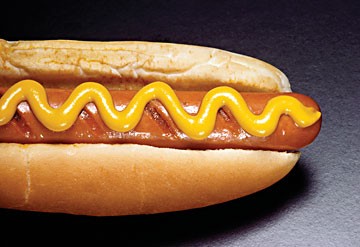 Coney Island was a seaside resort as early as the 1820s. Close enough to Manhattan to afford easy access by ferry, it was distant enough to be an escape from city routines. Walt Whitman wrote of "the long bare unfrequented shore I had all to myself ... and where I loved after bathing to race up and down." By the Civil War, it had a reputation for seedy, cheap hotels.

In 1867, the frankfurter was brought to Coney Island by Charles Feldman. His sausages were moderately popular as street food, but once he thought of using a small charcoal stove and adding a bun, the frankfurter became "the hot dog."

Nathan's Hot Dog Stand, established 1919, promoted the hot dog into the gastronomic major leagues, though not without some Barnum-esque hype. Coney Island was by then a watering place of high society. The rich who trod the boardwalk couldn't believe that anything that cost just a nickel could be good.

Rose Grant writes in Street Food (1989), "Long before it became the accepted way of business, Nathan did a bit of impromptu PR. He hired a few robust young men, dressed them in white coats, and staked them out in front of his stand. All they had to do was scarf down hot dogs and make a big to-do about how good they were. 'Look,' observed the high society types, 'the doctors are eating them; they must be good.' This was probably the first 'doctor's endorsement.' The crowds came; Nathan became rich and famous."

Grant continues, "Purists insist that there is one way to eat a hot dog: snuggled in a hot dog bun, with a thick ribbon of spicy mustard along its full length. The only permitted addition is warm sauerkraut." That is correct: relish, onions, catsup, mayonnaise and other condiments destroy it. Legal, perhaps. But morally wrong. Terribly wrong.

When I first arrived in Manhattan, throughout the year, on certain street corners you could see the distinctive blue and yellow umbrellas of Sabrett hot dog vendors. In the winter, steam rose from the carts and the aroma wafted out and made noses twitch and stomachs growl.

Ah, Sabrett hot dogs. There was nothing like them, certainly not "Nathan's." Even in the '60s they cost a buck, expensive for street food. The company itself did not franchise; they merely sold the ingredients, and if a vendor complied with their rules they allowed his propane-heated pushcart to sport one of their magic umbrellas.

A decade later, in New York on business, I visited Sabrett headquarters, and found to my amazement, an order form with a considerable array of frankfurters in various sizes, as well as fresh buns to match each frank. Five pounds was the minimum sausage order — in a box, frozen. Small buns by the dozen to match the dogs. A distinctive mustard — neither American, nor Deli, nor Dijon — but something in between, a depth and tartness perfectly complimenting the garlicky richness of the franks. And, of course, fresh sauerkraut, never canned. Like the mustard, it came in refrigerated gallon containers. In its original state, it was nearly raw, mild and al dente. Long, slow heating in a warm compartment in the cart gave it the perfect tang and consistency.

Twice on business trips I brought Sabrett franks back to L.A. Once, I even managed to lug several dozen tiny perfect buns. But replicating the experience was hopeless. Far too many variables, far too little time. So, living in L.A., I gave up on hot dogs.

That is, until I married a kindred soul, who approved the idea of re-creating treasured food memories. Ever since, we have been searching for lost gustatory paradises. And over the years, we've sometimes succeeded.

To revitalize The Perfect Hot Dog, let's return in time to 1960.

We start around 8:30 a.m., at headquarters, on 29th Street between 7th and 8th Avenue. The vendor arrives and claims his pushcart, which has been stowed overnight. He may trade in his propane tank for a fresh one. He has a standing order waiting for him. There is an assembly-line process, geared to getting the vendors out on time.

Let us say he equips his cart with 20 pounds of No. 9 frankfurters and 180 buns. Those buns will be quite small, by supermarket standards; the frank barely fits, jutting out a half inch on either end. The buns are hand-formed, tapering at the ends, with just enough body to stand up to hours of sitting in a warmer. The franks go into a steamer, and the sauerkraut settles into a stainless steel insert, where it will quietly simmer until needed. A gallon of mustard fits into another slot, whence it will be dispensed with a 3/4-inch wood dowel. (I've no idea how this evolved, but it is the perfect way to apply mustard to the dog without spilling over the edge of the bun.)

The man (never a woman) pushes his cart either south toward Union Square and Wall Street, or north toward the Garment District, Times Square and Central Park. The propane is heating up the ingredients, but the umbrella is closed. We are not open for business yet. By 10:00 or 10:30, the vendors are in place. There is never more than one in a two-block area. Why? By tacit agreement? An arrangement with the company? Mob payoffs? No one will say.

Now, office workers who started the day with coffee and a donut are on the street. From this point until about 3, there will be a steady flow of customers, punctuated by lunch rushes at 12 and 1. The larger carts may have had an icebox with pop, or a coffee urn. (But when would they have time to make fresh coffee? Where would they keep cups, cream, sugar?) I have no memory of anything but a line of people buying one or two dogs apiece, wrapped in paper, the addictive odor steaming up into the nose. And that first bite! The sausage casing is punctured and the captive flavors released. I could live on this.

Beni and I began the process of "reverse engineering" the Sabrett hot dog long before we left L.A. A charcuterie in Santa Monica made a well-spiced veal wiener with a natural intestine casing, and there was a small neighborhood bakery that could turn out a passable bun if ordered in quantity. It was OK. We were using canned sauerkraut then, and it was never quite right — too strong. It was only later that we realized the steamed-fresh-kraut principle.

When we arrived on the North Coast we abandoned such fancies. But in 1990, Humboldt Sausage Works (now Premiere Meats) moved in just down Central Avenue, and we were their first customers. Still in an experimental stage, they made a variety of esoteric stuff: lamb sausage, Northern Italian sausage with red wine and fennel seed, bulk chorizo. We pressed them for a classic frankfurter, and they produced one with superb spicing and size, far better than any nationally distributed brand of hot dog. Alas, the company enlarged and moved to Redding and the recipe changed. They still make wonderful hams and sausages and the best pancetta in the U.S.

We've tried every locally distributed frankfurter without success. But recently we happened upon Allen Brothers' online store. Their "Chicago style" (whatever that means) beef franks — eight per pound, with natural casings — had perfect texture and flavor. So we've begun to hope.

We can't re-create the pushcart experience, but we can, maybe, approximate the elements that make the New York Hot Dog a timeless moment.

I mix hot dog mustard from a combination of French's (for sour), Grey Poupon (for depth) and Gulden's (for sweetness and to darken the color). We use Clausen sauerkraut — in jars in the deli section (although Hebrew National, in plastic sacks, is equally good). Important: Do not use canned sauerkraut — better to go without.

Rather than steaming, we saut?© the frankfurters in a little butter in a just-warm skillet 10-15 minutes, turning frequently

until browned. Slice buns 3/4 through, warm them slightly, then insert the sausages, topping with mustard then kraut. We do three at a time, in a low covered casserole dish, so they taste fresh-steamed. When ready, put them in the microwave for 75-90 seconds.

This seems to be coming together. The last piece of the puzzle is: The Buns. And oh! what a critical piece.

Remember the tiny torpedo-shaped buns of Sabrett? We must suffer with commercial buns, great puffy, white things in which the wiener lies like a small corpse in an over-large coffin. But do not make the "gourmet mistake" of substituting good bread. What a great hot dog needs is puffy white bread buns, only far smaller. Our makeshift solution is Safeway potato buns, eight to a package. Still way too big for No. 8 franks, so we trim them, cutting each end 1/2 inch.

Brio, alas, only works from their basic Continental-style recipes, and thus far too "gourmet" for our needs. How can you complain about ingredients that are "too good"?

Just watch me. The best bakery in the country, way better than Brio, Acme Bread Company in Berkeley, makes soft, torpedo shaped buns on which we recently had hot dogs in San Francisco. So it can be done.

The North Coast has killed off local bakeries right and left over the years, and Brio has become the default good bread. Their breads are superb, of course, but far too dense for hot dogs. One alternative might be the wonderful housemade buns and breads of McIntosh Farms. Can we convince them to make buns to fit our franks? If so, we again may come close to replicating The Great New York Hot Dog.