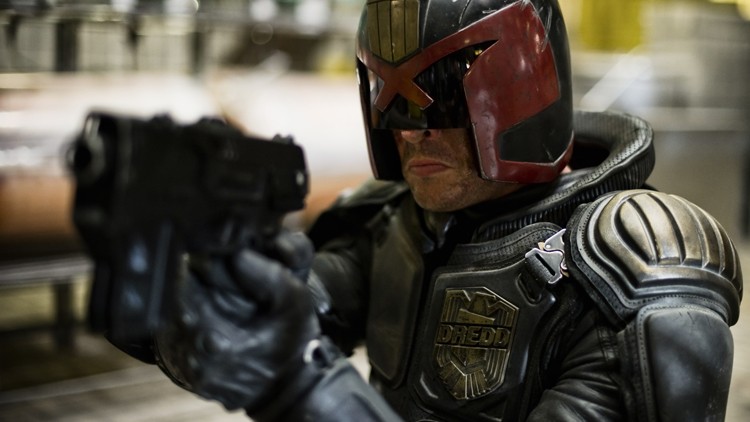 DREDD 3D. Remakes -- or reboots, as they're euphemistically called these days -- tend to be pretty depressing. From either lack of imagination or cost-cutting in the creative department, Hollywood usually rushes out a hack version of a recent foreign hit (Vanilla Sky, The Ring). Or someone might ill-advisedly take a crack at improving a classic (Gus Van Sant's bizarre Psycho, last year's Straw Dogs).

It is exceedingly rare for a studio/filmmaker to get it right, to revisit a movie with a strong premise that didn't quite work in the execution. Steven Soderbergh pulled this off with the Ocean's movies, as did Tarantino (sort of) with his Inglourious Basterds. Now little-thought-of director Pete Travis (Vantage Point) and screenwriter Alex Garland (28 Days Later) add Dredd to the short list of remakes that outshine their lamentable predecessors.

Dredd opens with a brief sketch of the burned-out husk that was once the world. Some apocalypse has decimated civilization, and North America is a poisonous wasteland dotted with dark, horrible mega-cities. Judges, iron-fisted soldier-cops with sentencing and execution privileges, are the only deterrent to anarchy and unchecked violence. In Megacity 1, population 800 million, the judges fight a losing battle against brazen, murderous gangs and the brain-boiling future drugs they peddle.

Enter Judge Dredd (Karl Urban), an apparently invincible death-dealer, legendary among cops and criminals alike. On an unexceptional workday, after Dredd blasts his way through some street toughs and bathes a mall in their blood, his supervisor tasks him with assessing a rookie on the verge of losing her job (Olivia Thirlby). They take a routine triple-homicide/torture/drug vendetta call to one of the city's roughest housing blocks, where they run afoul of ex-prostitute gang boss MaMa (Lena Headey), and end up having to blast their way through 200 stories of murderers.

The movie's premise sounds simplistic and familiar, and it is. There have been too many dystopian future cop actioners to count, but this one stands out. Dredd is far better than it should be. Garland's script avoids unnecessary exposition, instead cranking up the action and tension from the jump. The structure is simple, but he populates it with distinct, compelling characters. Even some of the bad guys get developed identities.

The most remarkable thing about Dredd may be the fact that it feels like a director-driven movie. All too often, action movies just hit the marks, blow stuff up, wind down to the end, and are easily forgotten. But Travis makes this movie his own, shooting it in an alternately gritty and lyrical style that is both original and completely in keeping with the tone of the story. I'm not familiar with the serialized British comic strip launched in 1977 that was the source material for the earlier Sylvester Stallone Judge Dredd. But this is what I want to see in a comic book adaptation: wall-to-wall action, compelling characters and stimulating visuals. R. 95m.

END OF WATCH. Writer/director David Ayer's latest makes an interesting addition to his catalog of LA cops-and-criminals stories. In the past, he mainly focused on the corrupting influence of power and the sometimes indiscernible difference between the forces of law and lawlessness. This time out he has made an unapologetic paean to the men and women in blue, the LAPD in particular. At first blush the reverent tone might put off some viewers, but Ayer backs it up with such a heartfelt, authentic story that only the most hard-bitten among us won't be won over.

Jake Gyllenhaal and Michael Peña play best friends and partners going about the business of LAPD patrol men. They goof around, take a few routine calls, get in shootouts and inadvertently find themselves in the crosshairs of the Sinaloa cartel. Not to be dismissive, but the plot of End of Watch isn't the most important element at work here. Ayer and his actors do the bulk of their work developing the relationship of the main characters and, in the process, establishing an air of everyday authenticity.

Where many of his past characters represented the larger-than-life, mythological aspect of policing (Denzel Washington's Alonzo Harris in Training Day is a prime example), Gyllenhaal and Peña play regular guys in distinctly irregular circumstances, good people uncomfortable being labeled heroes. Their relationship is complex and genuine, alternating between laugh-out-loud funny and devastatingly poignant.

End of Watch is shot partially in a found-footage style, with Gyllenhaal's character filming the action for a night-school filmmaking class. The rest of the action is photographed with the too-popular handheld, rapid zoom, motion-sickness cam. This is the only thing I disliked: The photography and editing are frenetic to the point of distraction. But for the most part, the action and performances are so compelling I could forgive the intrusion. R. 109m.

SLEEPWALK WITH ME. Comedic storyteller Mike Birbiglia, whose recent tour included a winning performance at HSU, co-wrote the screenplay for this film with This American Life's Ira Glass. "Birbigs" also codirects this "sweetly melancholic" comedy based on his own sleepwalking misadventures. A Journal pick o' the week. Not Rated. 90m.

LOOPER. Joseph Gordon-Levitt reunites with director Rian Johnson (Brick) for a sci-fi mob story. JGL plays a hit man whose job is to whack guys who have been sent from the future. When the future version of himself appears (in the form of Bruce Willis), well, that's what you call a conundrum. R. 118m.

HOTEL TRANSYLVANIA. Dracula (voiced by Adam Sandler) runs a posh, monsters-only hotel, catering to the likes of Frankenstein (Kevin James) and the Mummy (CeeLo Greene). But when a human boy shows up and falls for Drac's daughter, he thinks it sucks, so to speak. PG. 91m.

WON'T BACK DOWN. Inspirational public school drama alert! The premise sounds painfully familiar: A teacher and mom fight against complacency and bureaucracy in a failing inner-city school. Can a trio of great actresses (Viola Davis, Maggie Gyllenhaal and Holly Hunter) sidestep the clichés of this sub-genre? PG. 121m.

Stay out of Malibu, Lebowski! The Coen brothers' Raymond Chandler-on-weed comedy/pop culture juggernaut The Big Lebowski comes shambling back to the Arcata Theater Lounge for a two-night engagement this Thursday (8 p.m.) and Friday (9 p.m.), with White Russian drink specials, of course. I can think of no smooth transition to Saturday night's family-friendly film, Harry Potter and the Prisoner of Azkaban (2004), for my money the best of the boy-wizard series. 6 p.m.

HOUSE AT THE END OF THE STREET. A divorced mom (Elisabeth Shue) and her teenage daughter (Jennifer Lawrence) move into a house furnished with a psycho. PG13. 101m.

THE POSSESSION. Available for rent: body of young girl. Tenant must be malevolent spirit who can freak parents out by making girl convulse and puke locusts. PG13. 91m.

TROUBLE WITH THE CURVE. How does Clint Eastwood follow up his rambling indictment of a ghost-Obama at the Republican National Convention? With this drama about an elderly baseball scout bonding with his adult daughter (Amy Adams). PG13. 111m.