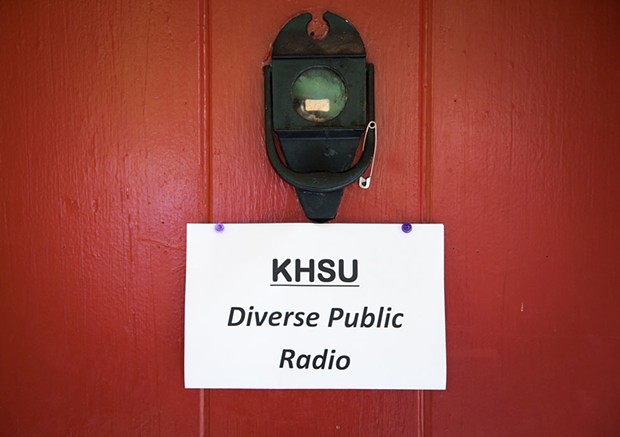 It's no secret that KHSU had been in some state of turmoil since the seemingly abrupt firing of longtime operations and program director Katie Whiteside last May, and more changes have long been rumored and feared. But nobody expected what came April 11, when Humboldt State University administrators went with what can only be described as the nuclear option.

In a matter-of-fact press release, the university announced that it would be eliminating seven staff positions and indefinitely suspending the vast majority of volunteer programming. It was the effective gutting of a community institution and it came with nary a statement from an administrator. There was no quote from HSU President Lisa Rossbacher lamenting the decision's having sent at least seven people to the ranks of the unemployed, nothing from KHSU General Manager Peter Fretwell publicly thanking volunteers for years (decades, in some cases) of unpaid work, nothing from HSU Vice President of Advancement Craig Wruck explaining the "reorganization" of a station to which dozens of people contribute their time — and hundreds more their money — every year. (This is to say nothing of the community members who donated earlier this month during the pledge drive, which trumpeted how those local dollars would fund local programming.)

It even seemed HSU went out of its way to give the station a bit of a kick on its way out the door with the last line of the press release: "Even with the changes at KHSU, listeners will continue to have access to high-quality national programming and news. The most recent audience data reaffirm this is, by far, the station's most popular programming."

Even HSU football was treated better than that so it shouldn't have come as a surprise when KHSU's two remaining employees resigned in protest.

It might be true that the most popular shows on KHSU were the national ones — we requested the data from the university, which declined to turn it over, calling it "proprietary," instead releasing live-streaming data that appears to support the premise but also shows that times of the day with naturally high listenerships are dominated by national programming. But even if its true, why the need to say it and rub dirt in the wound? And if the data shows that the local programming wasn't very popular, then why not craft a plan to change that?

We understand that there's no question the university is in the midst of a budget crunch that necessitates some difficult choices, though we'd argue that the savings from KHSU are relatively minimal in the grand scheme of things. Consider this: The university paid more than $265,000 in KHSU salaries over the past year. In 2018, Wruck's total compensation package came in at $271,792 and Rossbacher's was just a hair above $487,000, according to Transparent California.

But that's somewhat beside the point. If this was really primarily a budget decision, then HSU owed it to the station's 80-year history on the North Coast to show some class and kindness in making a decision that administrators well should have known was going to hit some members of this community hard. If the decision had to do more with content and turmoil, well, administrators owed it to this community to roll up their sleeves to make the station better.

They managed neither of those things and instead gave a new reason for the rest of Humboldt County to look up at the institution on the hill with disdain. For a university with an avowed town-and-gown problem, one that has been begging for public support for a student housing development and whose students have publicly lamented not feeling more at home in Humboldt County, this is an incomprehensible misstep. And it does not appear it will soon be forgotten.

For about a year now, the Journal has informally partnered with KHSU, sending a couple of editorial staffers to appear on the KHSU Magazine every Wednesday to talk about the week's news. In this time, we've come to know KHSU's staffers to be professional and hard-working, passionate and dedicated. We, like many listeners in Humboldt County, have appreciated having them in our lives.

That said, we'll do what university administrators seemed callously incapable of: To the staff and volunteers of KHSU, thank you for your collective decades of services to the North Coast and your efforts to make Humboldt County a more inclusive, vibrant and informed community. You will be missed.