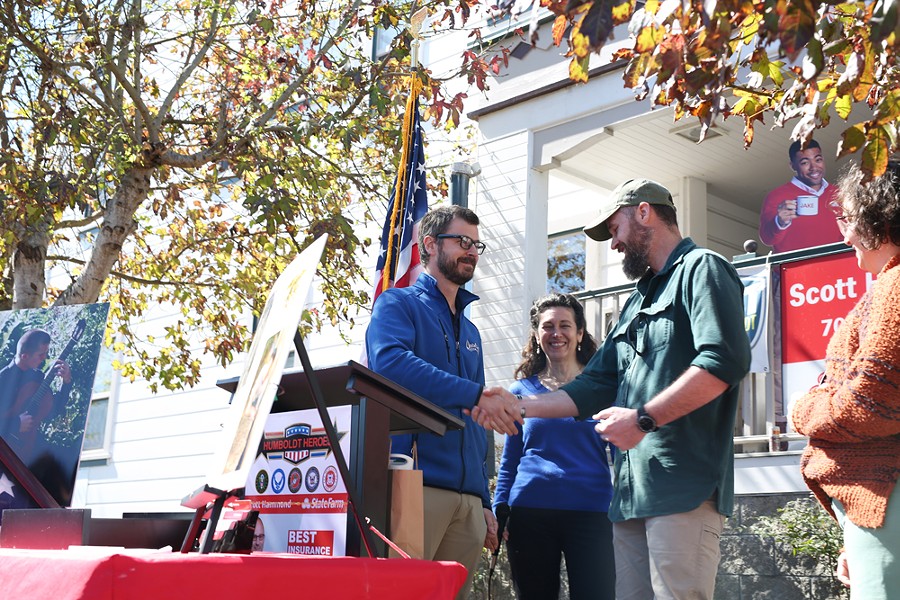 Photo by Carly Wipf Charlie Jordan (middle) smiles as Ross Creech from Quality Body Works (left) shakes the hand of Robert Raibley (right) in a ceremony where Raibley was just given the keys to a truck once owned by Jordan's son, Kevin Ebbert.

Submitted Arcata native Kevin Ebbert, who served as a physician's assistant as a Navy SEAL and was twice deployed to Afghanistan and twice awarded a Bronze Star with Valor, was killed during a stability operation in 2012.

Photo by Carly Wipf From left to right: Felipe Martinez, Samantha Martinez, Charlie Jordan, Robert Raibley, Mark Ritz and Raibley's fiancé stand in front of the truck after the ceremony.

Local business owners and community members gathered in Eureka on a recent Friday to give an old truck new life and an Army veteran a hand up while celebrating the legacy of an Arcata-born veteran.

In an effort called "Project Jumpstart," Quality Body Works partnered with other Humboldt County businesses to restore a donated vehicle for a local veteran. On March 25, the team gifted the red Ford pickup truck to 38-year-old Army veteran Robert Raibley in honor of the vehicle's previous owner, Petty Officer 1st Class Kevin Ebbert, who was killed in the line of duty in Afghanistan.

The small ceremony, hosted by Humboldt Heroes, was held under a sunny Eureka sky in front of Scott Hammond's State Farm Insurance Agency. Raibley was accompanied by his fiancé and Clifford LaMastus, the Veterans Enrollment and Transition Services (VETS) coordinator at Cal Poly Humboldt, who nominated Raibley to receive the truck.

"I put Rob in for this because I understand the experiences he has been through," LaMastus said. "We share similar experiences and I know the hardships he's had to deal with over the years up until now. Seeing some of his struggles and accomplishments while being up at Humboldt is inspiring to other students and to myself. The whole VETS program team up there is proud of him."

Raibley served in the Army from 2002 to 2012 as an airborne infantryman and an Honor Guard soldier at Arlington Cemetery. He deployed twice to Iraq and once to Afghanistan. Following his decade-long military career, he worked for Schlumberger, cementing casing into oil wells in Texas.

"It was a good job — a really good paying job — but it just wasn't for me so I decided to go back to school," he said.

Raibley received a bachelor's degree in geology at Humboldt State University and is currently pursuing a degree in natural resources at Cal Poly Humboldt while working on a project with Green Diamond Resource Co. His goal is to one day land a federal forest or natural resources management position.

"Being in the woods is kind of like my reset and what I need to heal, in a sense, from the past. And being in forestry, you get to have a truck and your dog can go to work with you every day," he added with a laugh.

In addition to his studies, Raibley works in the VETS office and helps plan trips for its outdoor program. Raibley took the truck to class after the ceremony and said he planned to use it to take his golden retriever up to Horse Mountain over the weekend.

Charlie Jordan, Ebbert's mother, who co-owns Kinetic Koffee in Arcata, passed the truck's keys over to Raibley at the ceremony — a gesture that drew tears from both the donor and recipient.

"It's very overwhelming," Raibley said. "It's a hard thing to take a fallen brother's truck and to accept it, but it's very honoring."

Ebbert was a local boy. He grew up in Arcata and graduated from Arcata High School. He loved backpacking and playing music — so much so that he left town to attend the University of California at Santa Cruz and graduated with honors in music composition.

"He just loved good music," Jordan said in an earlier interview with the North Coast Journal. "He had pretty much every kind of guitar you can imagine."

Ebbert was accepted to two universities for a master's program but insisted on following in the footsteps of his father and uncle, who were Navy SEALs. He was trained as a medic, reaching the level of physician's assistant as a SEAL, and earned a Bronze Star with Valor for saving his teammates during his first deployment. He had dreams of becoming a doctor after his service.

But those dreams were cut short when Ebbert died in the line of duty during a stability operation in Afghanistan on Nov. 24, 2012. According to Humboldt Heroes, Ebbert saved many lives during his two deployments and "repeatedly ran into fire to pull to safety or work on men that had been injured." During his first deployment, he set up a medical clinic for locals.

On his second deployment, according to Humboldt Heroes, Ebbert's unit was ambushed. As a radioman, Ebbert stepped from the relative safety of cover to transmit radio coordinates for air support.

"It was then that he was hit by a sniper," a Humboldt Heroes press release states. "The firefight continued but Kevin had been successful in getting the location of his men back to base where air and ground support were able to extract all without further loss of life."

Now, nine years after his death, Jordan let go of the truck. She said it's what Ebbert would have wanted.

She also said letting go of the truck has allowed her to process some of her grief.

"When you lose somebody, you don't make any new memories with them," Jordan said. "You don't get to have an ongoing, in-person relationship, so you create memories in different ways — and this is a new memory. It's continuing the relationship with Kevin because he's not here to [donate the car himself], so we will do it on his behalf and I don't know that you can do any better than that in this situation."

The truck was Ebbert's first vehicle, Jordan said, adding that her son wasn't very attached to material things. He insisted on having something functional — preferably a stick-shift. The truck remained with his widow for some time before she offered to pass it on to Jordan.

Jordan, who enjoys working on cars, initially had visions of refurbishing the truck herself, so one of Ebbert's closest roommates and Navy SEAL teammates drove the truck to Jordan from West Virginia. But when COVID-19 hit, Jordan said she wasn't able to make the repairs and drive the truck as much as she had hoped.

"It just weighed on me, that it's not what Kevin would want," she said. "He would want it used."

She met Ross Creech, owner of Quality Body Works, after one of Kinetic Koffee's vehicles was vandalized. As the two talked about the work that needed to be done, Creech told her about Project Jumpstart's donation program and Jordan said the mission "immediately resonated" with her.

This, she knew, was the truck's purpose.

"This truck in this project, and this storyline, it kind of got dropped into our laps," Creech said. "It's kind of one of those stories that just gives you goosebumps and just the fact that Charlie, Kevin's mom, was willing to and wanted to donate the vehicle and to work with us on it is just really a humbling, humbling thing."

In 2019, Quality Body Works donated a 2006 Ford Focus to a recipient found through the Betty Kwan Chinn Homeless Foundation. The body shop was gearing up to donate a similar car this upcoming year until connecting with Jordan.

Creech wanted to ensure the car's new owner didn't have to worry about the slew of costs that typically come with vehicle ownership, so he enlisted the help of other Humboldt County businesses to reduce the burden for the car's new owner.

To that end, Redwood Fuels (Shell) will provide $50 gas gift cards every month for the first year the new owner has the vehicle, Premier Oil Change will gift a year's worth of oil changes and Scott Hammond from State Farm Insurance will provide insurance for six months, while ADS In Motion/Advance Display and Signs will recognize all the businesses that participated in Project Jumpstart on the back of public buses, according to Charles Edwards, the company's co-founder. Edwards' other company, Stroop FX, was responsible for marketing the project. HealthSport also offered a gym membership and purchased new tires for the truck.

"The idea was to not only give a car away but to try to give somebody a kind of step forward if one of the hurdles in getting their feet back under them was transportation," Creech said, adding

there was "no hesitation" from businesses when he approached them about getting involved.

Buddy's Towing in Eureka towed the car into Quality Body Works and the team got to work, connecting with other businesses to get the pickup into shape. Goselin Transportation installed new tires, Leon's Car Care Center provided a complete mechanical overhaul, S&H Autoglass replaced the windows and the truck got finishing touches at Quality Body Works.

Dale Warmuth, office manager for Leon's Car Care Center, said his shop put about $3,500 of work into the truck, including timing belt maintenance, a new battery and changing oil and fluids. Warmuth said they also helped with the last car donation and were ready to help again next year.

"We're blessed that we are busy enough to make those contributions back to the community," he said.

Becca Blanc, who works at Bedliners Plus, which installed a new bed liner worth about $550, said the business is very supportive of veterans and could not say no when approached about helping to get Ebbert's car ready for a new owner.

"It turned out really nice," she said. "It's very nice of the lady to donate and nice for everyone to kick in and help out so someone else can get something good out of it. ... There's still good people in Humboldt County."

Carly Wipf (she/her) is a freelance reporter based in Eureka.