Sam Raimi’s Oz might have been wonderful, if it only had a heart 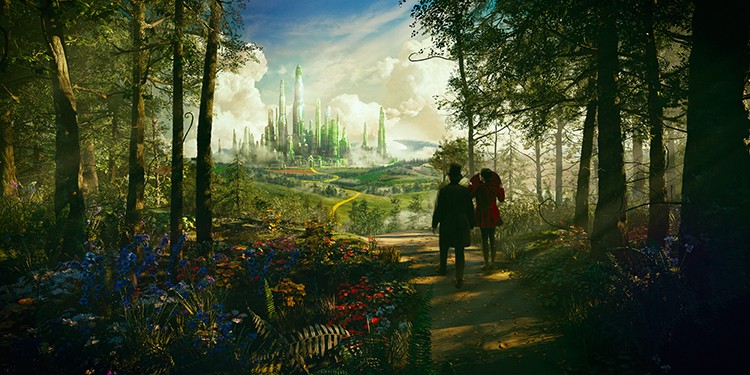 OZ THE GREAT AND POWERFUL. Sam Raimi is a director of considerable talents. His best stuff (the Evil Dead trilogy, The Gift, Drag Me to Hell) showcases his distinctive visual style, slapstick humor, sharp editing and a reverence for classical horror cinema. When it works, it really works. Oz doesn't really work.

We open in Kansas, 1905. A shaggy traveling circus has rolled into town, and Raimi shows it off in a long, black-and-white boom shot (one of the movie's creative high-water marks). Oz (James Franco) runs a sideshow magic grift and dreams of greater things. Before long, his implied philandering enrages the circus strongman, whose pursuit leads Oz to beat a hasty escape in a hot air balloon.

His timing couldn't be worse; a tornado takes hold of his conveyance, and before you know it he crash lands in a vividly colorful Cinemascope wonderland. From there, he's off to be the wizard, yellow brick road, Emerald City, witches and all.

The trailer prepared me for a sumptuously imaginative revisiting of the L. Frank Baum mythology. What it failed to disclose was the countless plodding scenes of exposition-heavy dialogue, which awkwardly advance the story from one plot point to the next. Like I said, Raimi has a lot of strengths as a filmmaker; directing walk-and-talks isn't one of them. And in the case of Oz, neither is casting.

I like Franco, as much for his intellectual antics as his weirdo-James Dean screen presence. But this part, or Raimi's conception of it, calls for a straightforward approach, which doesn't play to Franco's strengths. He has a genuine talent for conveying difficult emotions like jealousy and wounded pride, but the Oz character doesn't leave room for that. It's all P.T. Barnum bluster without any introspection. And his PG-rated chemistry with Michelle Williams and Mila Kunis is bloodless to the point of implausibility.

But the most frustrating element may be the visual depiction of the Land of Oz. At nearly 75 years old, 1939's The Wizard of Oz remains immersive, even revelatory for its use of the technology of the day. Technicolor, still new at the time, was employed in a way that few films have rivaled. Ditto the large-scale soundstage production, fantastical set and costume designs and matte (backdrop) painting. Technology has advanced immeasurably since then, but in Raimi's movie it amounts to a maelstrom of humdrum digital effects. In recreating Oz with green screens and 3D rendering, the filmmakers have robbed Oz of its tactile charm. PG. 130m.

DEAD MAN DOWN takes a million-times-retold story about revenge-crossed lovers, updates it to present-day New York and adds Hungarians, Albanians and a lot of guns. The end result: a faux-noir that's disappointingly short on style and substance.

Victor (Colin Farrell) is a rising star in a scrubby criminal organization led by a would-be slumlord named Alphonse (Terrence Howard). But Victor has secrets, and his neighbor Beatrice (Noomi Rapace) knows at least one of them. She saw him commit a murder and intends to blackmail him into committing another on her behalf. The man she wants dead is a drunk driver who hit her, forcing her to undergo facial reconstructive surgery while he served just three weeks in jail. Victor agrees to the deal, and soon he and Beatrice are both deeply involved in a separate revenge plot that he's got going, one that's even more elaborate, less plausible -- and central to the plot, so I won't go into it.

A few small but fundamental problems stop Dead Man Down in its tracks. For one, Victor's character is depicted as some sort of poor man's James Bond, beyond-capable in a number of violent arts. These skills are explained away as a result of "military service."  For another, we're supposed to believe that Beatrice's surgery has rendered her hideous and unable to continue a normal life. Kids in her neighborhood call her monster and throw rocks when she walks down the street. But she looks just like Noomi Rapace with some interesting scars around her left eye.

Even these details could work in the context of the movie, even add to its atmosphere, but they are mishandled. Rather than creating a world for his characters to inhabit, director Niels Arden Oplev lets the action play out in the real one, so the flawed logic and implausible characterizations stand out all the more. Oplev did so well with The Girl with the Dragon Tattoo, which is painted with similarly broad thematic strokes, that I was optimistic, even excited to see Dead Man Down. But where the former was atmospheric and engrossing, this one is dismally predictable and unsatisfying. R. 110m.

THE CALL. Halle Berry plays a 911 operator who takes a call from a teenage girl who's been abducted. To save the girl's life she must confront a killer from her own past with only her telephone headset and a wide-eyed look of panic. R. 95m.

21 AND OVER. The dudes who wrote The Hangover recycle the premise (drunken morons breaking stuff) with characters who are barely legal. R. 93m.

DARK SKIES. The suburban Barrett family gets targeted by an unimaginably terrifying force. Seriously, you can't even imagine it. PG13. 95m.

ESCAPE FROM PLANET EARTH. A nerdy alien must save his heroic brother in this poorly reviewed CGI cartoon comedy. PG. 89m.

A GOOD DAY TO DIE HARD. Bruce Willis is back for the fifth time as wisecracking supercop John McClane. R. 98m.

JACK THE GIANT SLAYER. This bland, big-budget retelling of the classic fairytale warrants a "Fee-fi-HO-HUM." See what I did there? PG13. 114m.

THE LAST EXORCISM PART 2. So, wait. That first Last Exorcism was really the second-to-last exorcism? That rascally devil! PG13. 98m.

SNITCH. Dwayne Johnson stars in this action-thriller as a man who goes undercover with the DEA to save his son. PG13. 112m.

WARM BODIES. Teen rom-com based on the Bard's Romeo and Juliet -- with zombies. PG13. 97m.