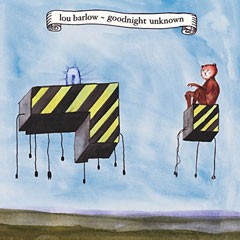 Prolific singer/songwriter/musician Lou Barlow seems to be bringing things together of late, rather than fragmenting further into additional side projects. After his departure from Dinosaur Jr., where he was a founding member, Barlow created Sebadoh with instrumentalist Eric Gaffney. Then came the lo-fi independent side project Sentridoh. Then The Folk Implosion. Having recently rejoined and recorded with Dinosaur Jr., Barlow's recent solo offering, Goodnight Unknown, is, surprisingly, only his second recording under his own name. And it is the most cohesive, finest recording of his "solo" career.

Barlow's confidence has grown considerably since 2005, when he released his first official full-length solo album, Emoh. Barlow's eclectic tastes, exemplified in all of the aforementioned projects, are evident throughout Goodnight Unknown, yet collectively they create an intriguing "home recording" compilation, with a track listing that contain arcs. Having initially recorded the bulk of the songs at home, Barlow then took the recordings to a studio, adding vocals and drums. "Recording at home or a space where I feel comfortable is something I have always done and will always do," said Barlow in a recent interview with Clashmusic.com's Robin Murray.

Goodnight Unknown opens with a blasting rocker, "Sharing," that delivers a burst of early Dinosaur Jr. energy with Barlow's pop touches and melodic vocal delivery, but stripped of the muscular guitar work. In fact, most of the songwriter's more dense pieces -- such as "Gravitate," the bombastic "One Machine, One Long Fight," and the thunderous Ennio Morricone-like epic, "Don't Apologize" -- sound big atmospherically, with a mixture of percussion and acoustic guitars filling in the sound to accentuate the rhythm and lend dramatic qualities. The mid-tempo pop-rock tune "The Right" cleverly uses an antiquated rhythm machine and an acoustic guitar to propel its chugging beat, while nailing it all down with a soaring melody.

However, Barlow's real strength lies in the spare, acoustic pop-folk numbers. "The One I Call" is a majestic song filled with hooks, breaks, and mood changes displaying Barlow's intricate sense of composition. "Too Much Freedom," an excellent upbeat acoustic piece, offers a delicate (and beautiful) interplay between Barlow and singer/songwriter Imaad Wasif, who contributes his guitar talents throughout the record. Lisa Germano, Soul Coughing's Sebastian Steinberg and drummer Dale Crover are among other contributors to Goodnight Unknown. However, through and through, you get a strong sense that this is Lou's record.

"A cross between Folk Implosion and Sebadoh. To my ears, anyway," states Barlow, on a promotional sticker used on the album packaging. Though it's meant to be somewhat ironic, it's also a pretty dead-on description. The prolific songwriter seems to successfully blend his various musical identities for a satisfying record of Lou Barlow pop gems.