Seniors relive their blow-em-up years, plus an earnest indie and a bland spookfest 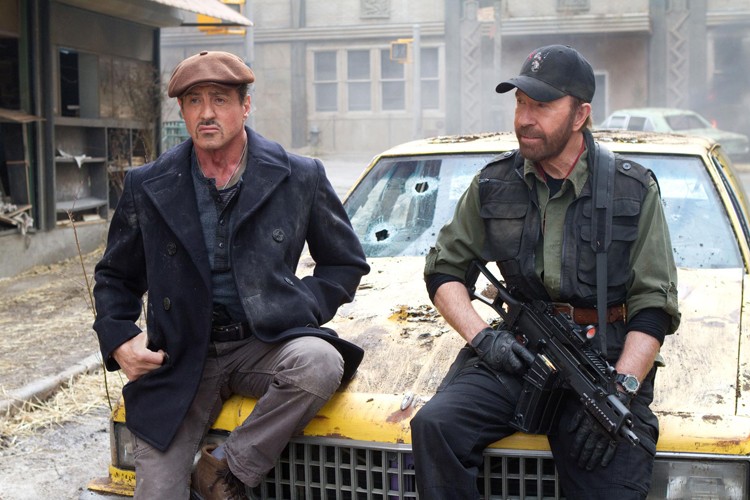 THE EXPENDABLES 2. This latest installment in Stallone's geezers-with-guns franchise is unabashedly overblown, irresponsible macho horseshit -- and I kind of love it. I may be the bull's-eye of the target audience for these movies. I cut my teeth on the crass, ultraviolent Hollywood action movies of the '80s and '90s, so I don't think I can be blamed for feeling transported by the lowbrow glory of the The Expendables 2.

Nostalgia aside, these movies are pitiably bad. The dialogue is riddled with painfully obvious clichés, the action scenes aren't particularly imaginative and the acting is ... well. Yet somehow, in embracing what makes them so awful, in turning a middle finger up to the critics, both Expendables movies have been satisfyingly loud and silly.

For the uninitiated, the Expendables are a crack team of mostly late-middle-aged mercenaries. They are, apparently, the best of the baddest. (They wantonly emblazon themselves, their motorcycles, aircraft and weapons with skulls and stuff, just so we get the message.) They're killers, each with a different specialty, and they all believe in doing the right thing, particularly when it requires explosions and large-scale death-dealing.

It's adolescent, GI Joe fantasy nonsense. If you can't get with that, there isn't anything I or anyone else could say to bring you around. Nor can I blame you; enamored as I am of movie combat, I still have to silence parts of my psyche to enjoy movies like this -- like the parts that celebrate film-art as personal expression, or question the ethics of entertainment based on violence for violence's sake.

The Expendables 2 is not a good movie by any real critical standard. It's not anywhere close to a great action movie (Die Hard) or even a pure guilty pleasure (Crank). But it is, for the right audience, enjoyable from start to finish. Stallone did well to hand off directing duty to Simon West (Con Air). His style isn't particularly innovative, but this sequel is sure-footed and consistently paced where its precursor was talky and uneven. R. 102m.

RUBY SPARKS. Director/spouse team Valerie Faris and Jonathan Dayton follow up Little Miss Sunshine (2006) with this, another sweetly sad meditation on the inner lives of lonely, sensitive people. I like it, but I can easily see how critics could fault its quirky earnestness and indie composure.

Paul Dano plays Calvin Weir-Fields, a wunderkind struggling to produce a second novel some 10 years after the startling success of his debut. He lives with his dog in a modern, antiseptic LA house, all but a shut-in. His therapist gives him a half-baked writing assignment that somehow jolts him out of writer's block. He pours himself into the creation of an ideal woman, writing day and night with hardly a break. Then, miraculously, that ideal woman is awake and corporeal and inside his house. This creates some consternation.

The script by Zoe Kazan, who also plays the title role, takes this tidy little premise and explores first the honeymoon period, then the restless, prickly settling-in. When Ruby turns out to be a real person, beyond the easy attributes Calvin was so desperate for, he's forced to again wrestle with his loneliness and fear of strangers.

Ruby Sparks is a self-assured, ultimately satisfying little movie. Matthew Libatique's cinematography is spare and thoughtful without overwhelming the subject. The pacing and dialogue have a unique, natural rhythm that suits the story. Dano and Kazan deliver smart, vulnerable performances in the leads and are supported by a terrific cast, including Annette Bening, Antonio Banderas and Elliot Gould. My only real complaint is that Kazan's script occasionally gives her scenes that feel like something she wrote for an acting workshop -- as if she felt she had to demonstrate her own versatility. Let that minor indulgence slide and the movie is emotionally authentic and very watchable. R. 104m.

PARANORMAN. Laika Entertainment, the animation studio behind Paranorman, made its name with 2009's Coraline. And with good reason: That earlier effort is charming, atmospheric and inventive. This follow-up shares Coraline's beautiful stop-motion animation and star-studded casting. But its tale of a misunderstood boy who must save his town from ghosts and zombies lacks Coraline's imagination and story development. Granted, it's hard to beat a Neil Gaiman story as the basis for an animated feature. He's a dark fantasy juggernaut, and even a minor work like Coraline stands head and shoulders above the bulk of the derivative, predictable pap the major studios churn out. Paranorman lives, sadly, somewhere deep in that bulk.

The movie isn't without its merits. It boasts fluid, top-notch animation, gorgeous, minutely detailed set design and some winning performances. The first half of the movie actually makes pretty compelling viewing. But as the climax draws closer it becomes all too clear that the script doesn't have any particularly interesting angles. About two-thirds of the way in, I was just waiting for the thing to end.

I may have overburdened Paranorman with my expectations. Months ago, I was utterly captivated by the official trailer. It wordlessly evoked an atmosphere of humor and dread, thanks to some brilliant editing and the strains of Donovan's "Season of the Witch." Like a trailer should, it left me wanting more. I anxiously awaited the opportunity to explore the funny, creepy world Laika conjured up. That world is indeed compelling, but the story unfolding within it is completely conventional and frustratingly lackluster. PG. 93m.

PREMIUM RUSH. Joseph Gordon-Levitt stars as a Manhattan bike messenger who gets caught up in the dirty dealings of a crooked cop (the great Michael Shannon). Judging by the trailer, this movie has the goofy knob turned up to 10, with video-game editing, death-defying stunts and comically corny dialog. Might be awful, or it might be a total blast. PG13. 90m.

On Friday the Arcata Theatre Lounge will screen The Dark Knight (2008), Christopher Nolan's second and, for my money, best Batman movie, with a mesmerizing performance by the late Heath Ledger as the Joker. PG13. 152m. Saturday at 9 p.m. brings Ben Stiller's hilarious sendup of Hollywood Vietnam movies (among other deserving targets), Tropic Thunder (2008). R. 107m. 9 p.m. Sci-Fi Pint and Pizza Night comes lumbering in next Wednesday with the 1987 domestic Bigfoot comedy Harry and the Hendersons, which will be followed by Horror Express, a Spanish horror film from 1972 in which snooty British academics on a train encounter a monstrous alien.

DIARY OF A WIMPY KID: DOG DAYS. Slapstick kid comedy in which the titular "wimpy kid" has a mishap at a public pool, among other misadventures.PG. 94m.

THE ODD LIFE OF TIMOTHY GREEN. A childless couple writes down their hopes for a young'un, then buries them in the backyard. Hark, a dirty kid emerges. PG. 100m.