Got It Down Cold

If you like the Ice Age movies, well here's another one 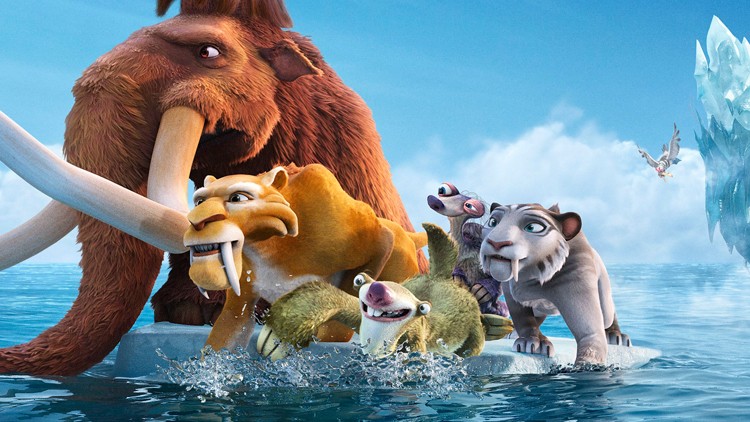 ICE AGE: CONTINENTAL DRIFT. You might as well take the kids to see the fourth installment of the Ice Age series because they're not going to stop making them. And why should they? These folks have the family movie thing down cold. The films look great, they have some heart, they're witty and they're fun for both parents and kids. And thankfully they're not three hours long. Is anybody else secretly glad the Harry Potter movies are over?

The herd is assembled again, led by Ray Romano as the put-upon mammoth father, Manny. Romano has turned an extinct hairy elephant into an everyman with whose frustrations parents can identify. He's also a member of another rare species: an admirable cartoon dad. As Diego the saber-tooth and Sid the sloth, Dennis Leary and John Leguizamo have a solid odd-couple shtick. (One wonders, though, how Leguizamo can keep his drooly lisp going for a whole film.) At the end of the day, these are all funny people, and they seem to be having a pretty good time inhabiting their cartoon characters.

In previous episodes, the herd has been visited by the drama of human hunters, geothermal change, impending extinction, historically out-of-place dinosaurs and new parenthood. Now, Manny and his mate Ellie (Queen Latifah) are beset by the teen drama of their daughter Peaches (Keke Palmer). This on top of the shifting land masses and iceberg pirates. Some of the themes are a bit pat -- be yourself; kids have to grow up sometime -- but they aren't pushed too hard.

Unfortunately, the teen subplot doesn't yield much in the way of comedy compared to the slapstick and ribbing in the earlier movies. Mostly the film moves from one action sequence to another, with plenty of the franchise's signature slides, jumps and falls. Kids will especially enjoy the prehistoric hamsters who have a Braveheart moment.

There are a number of new cast members, too. The hilarious Wanda Sykes hollers and gripes along as Sid's long-lost grandmother. Peter Dinklage, who's always both funny and intense, has a ball as Captain Gutt, the primate pirate who snarls, rages and bursts into song. Who knew? Jennifer Lopez, on the other hand, slinks onscreen as more or less herself: a sexy saber-toothed white tiger in fabulous hoop earrings. The rest of the inter-species pirate crew is good for a few laughs, too.

At the end of the day, Scrat the squirrel's single-minded acorn lust is still the highlight. He's a bug-eyed portrait of compulsion and desire. His schemes and sufferings -- the falls! the flattenings! the bends! -- are worth the price of admission. PG. 94m.

THE DARK KNIGHT RISES. The most anticipated blockbuster of the summer, this third and reportedly final film in Christopher Nolan's Dark Knight Trilogy picks up where the last one left off: with Batman (Christian Bale) a fugitive, blamed for the death of Gotham's beloved district attorney. Now, a terrorist leader named Bane (Tom Hardy) lures the caped crusader from the shadows. Nolan has already raised the bar for superhero movies by painting Batman/Bruce Wayne as a tormented soul, someone motivated as much by anger, guilt and fear as by a quest for justice. And he's used that character to explore such weighty themes as post-9/11 justice, American corruption and the futility of revenge -- with plenty of explosions and chase scenes, of course. And this time, Anne Hathaway as Catwoman! Meow. PG13. 164m.

SAFETY NOT GUARANTEED. Three hipster-cynic magazine employees find a classified ad that reads, "Wanted: Someone to go back in time with me. This is not a joke. You get paid after we get back. Must bring your own weapons." They track down the author, a credulous supermarket clerk, who leads them into quirky comedy territory. Starring Aubrey Plaza (Parks and Recreation) and Mark Duplass. R. 86m.

The Arcata Theatre Lounge has a grab-bag of cheesiness for this week's Sci-Fi Pint and Pizza Night, offering "babes, beaches, monsters and Tommy Kirk." Thursday night's camp thrills start at 6 p.m. with It's Alive (1969), a rubber-monster movie starring Kirk, who as a kid starred in such family fare as Old Yeller and The Hardy Boys. That will be followed by Catalina Caper (1967), a beach party mystery that also stars Kirk and features Little Richard singing "Scuba Party." Friday night at 9, the ATL will show one of the greatest comedies of all time, the Coen brothers' 1987 classic Raising Arizona, starring Nicolas Cage and Holly Hunter as a pair of loony hillbilly baby-nappers. PG13. 94m. The hilarity continues Sunday at 6 p.m. with another classic from the same year, Rob Reiner's eminently quotable, tongue-in-cheek fairytale comedy The Princess Bride. PG. 98m.

ABRAHAM LINCOLN: VAMPIRE HUNTER. Little-known historical fact: Honest Abe had ninja-like skills with an ax, and he used 'em to chop down bloodsuckers. And by "fact" we mean "bullshit." R. 105m.

FOR GREATER GLORY. Andy Garcia stars in this historical chronicle of the Cristeros War (1926-1929), a popular uprising against an anti-Catholic Mexican government. R. 145m.

SAVAGES. Oliver Stone brings his ham-fisted self-seriousness to this tale of ambitious weed dealers who get mixed up with a Mexican cartel and John Travolta's crooked CIA agent. R. 130m.

TO ROME WITH LOVE. Woody Allen's latest is a mess, a hodgepodge of pretty characters in a pretty European city and not much more. R. 112m.