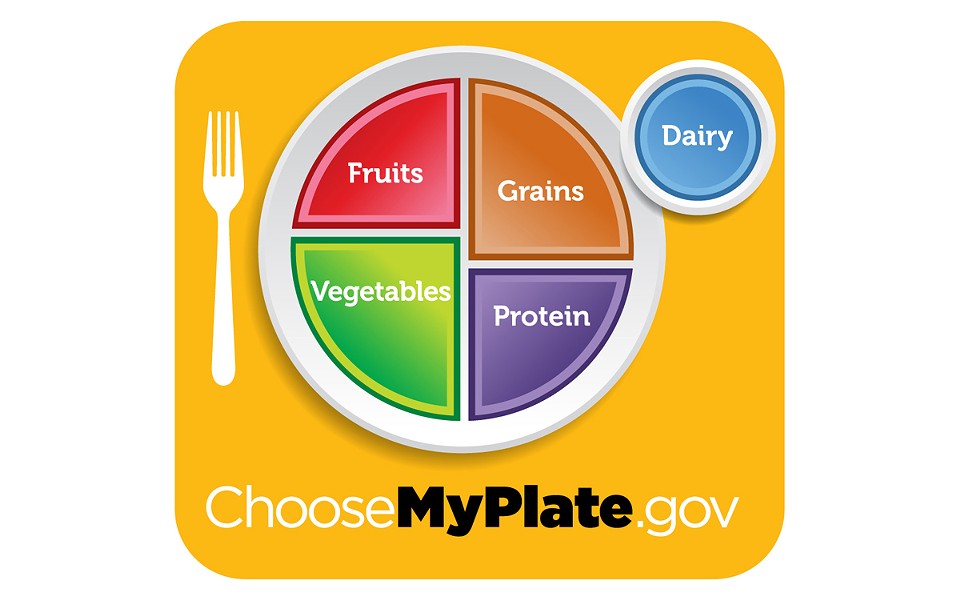 MyPlate, the USDA's new symbol of dietary correctness, was unveiled on June 2. It replaces the agency's Eating Right Pyramid (est. 1992), which succeeded the Four Basic Food Groups (1956). Those four in turn represented a consolidation of the seven food groups the agency pushed in the 1940s, pared down from 12 during the Great Depression, when many people would have been happy to find even a single food group on their plates.

The USDA's first nutrition guide was published in 1916, a year after the National Dairy Council was founded. The dairy industry has worked tirelessly with (and on) the USDA ever since, an investment that has paid many dividends, including dairy's privileged perch as one of only four basic food groups. And despite zero scientific basis that a healthy diet requires dairy, the stuff has managed to maintain its position as a key dietary recommendation on each successive symbol du jour, through the pyramid days and on to today's MyPlate graphic.

In fact, the MyPlate paradigm is practically a repeat of the Four Food Groups, with only three discernible tweaks.

The "meat and fish" group has been generalized to "protein." This is barely even a change, and more of a semantic adjustment to reality given how many ways there are to get your fill of essential amino acids without meat.

The grain group made the transition to MyPlate relatively unscathed, with an added piece of advice to eat more whole grains. It's worth mentioning that plenty of "Paleo diet" followers, not to mention the Atkins crowd, seem to do fine without grains as well. And if you avoid grains and sugars, it's practically impossible to get fat.

The most substantial change to the dietary recommendations is the "fruit and vegetable" category, which has been split in two. Fully half of the USDA's new plate consists of fruit and vegetables. This is an audacious goal considering how few Americans currently come close to consuming that ratio. If taken to heart by enough people, this change alone could have profound effects on public health.

By including recommendations against oversized portions, and generalizing the protein group, the USDA has managed to distance itself from the influence of special interests like the meat and fast-food industries. But it remains clearly beholden to dairy.

This brings us to the third discernible difference from the four food groups: The MyPlate symbol includes a little circle next to the plate that looks like a glass of milk. Labeled "Dairy," it stands for three daily servings of dairy, including cheese, yogurt, milk and other processed secretions of mammary glands, usually bovine.

"USDA's new MyPlate, the simple visual metaphor of a serving of dairy products alongside a plate, says it's vital to consume three servings of low-fat and fat-free dairy foods every day," gloated Jerry Kozak, president of the National Milk Producers Federation, as he tacitly reveals how the new guidelines seem tailored to encourage maximum dairy industry profitability.

Three servings of dairy per day would be an increase for most Americans, who currently consume an average of two. Encouraging Americans to eat low-fat and nonfat milk products means even more profit, because the fat skimmed off is then processed into butter and other marketable products. The more items you can sell from a single gallon of milk, the more money you make, which is why as far as the dairy industry is concerned the MyPlate cup might as well be full of Champagne: The industry has convinced USDA to recommend increased consumption of a product that's not only unnecessary, but is actually bad for most people.

Lactose intolerance, by some estimates, affects 75 percent of the world's population. Caucasians have one of the lowest rates of intolerance, at only 12 percent. These numbers don't include people like me, who may not get diarrhea and other classic effects of lactose intolerance, but don't do well on dairy, with results including phlegm, heartburn, and upset stomach. And if 75 percent or more of the world's humans can't handle dairy, it's hard to argue it being necessary for optimal human health.

Here is USDA's obsequiously dairy-centric advice to the lactose-averse: "If you avoid milk because of lactose intolerance, the most reliable way to get the health benefits of dairy products is to choose lactose-free alternatives within the Dairy Group, such as cheese, yogurt, lactose-free milk, or calcium-fortified soymilk (soy beverage), or to consume the enzyme lactase before consuming milk."

Calcium is the primary justification for the importance of dairy, but many green vegetables offer just as much calcium as milk, and in a more absorbable form. With the exception of soymilk, all other calcium sources, including almond milk -- which contains twice the calcium of dairy milk -- are cautioned against: "[Non-soy, non-dairy calcium sources] may provide calcium, but may not provide the other nutrients found in dairy products."

If science and health were calling the shots, then milk products would simply be absorbed into the protein category as one of many ways to get your essential amino acids, or perhaps into a "calcium" group that would also include dark-green leafy vegetables and fortified dairy alternatives.

Much of the positive health hype about dairy is perpetuated by the National Dairy Council, which has a history of exaggerating dairy's positives and downplaying its negatives. In 2007 the Federal Trade Commission forced the NDC to retract its claim that dairy consumption encourages weight loss.

The NDC is "the nutrition research, education and communications arm of Dairy Management Inc." whose website makes its intentions clear -- and improving public health isn't one of them. "DMI helps build demand for dairy on behalf of dairy producers and is dedicated to the success of the dairy industry."

Consuming dairy products is a choice that we (at least the lactose tolerant among us) have. But to spin the consumption of milk as a thrice-daily necessity is yet another scary reminder of the power the dairy industry wields on USDA policy.

At least with food we have the option to think for ourselves. But if USDA policy is so clearly shaped by industry, it makes you wonder about compromises the agency might make in other areas of its purview. USDA regularly makes decisions on things like pesticide regulation, forest policy and approval or disapproval of genetically modified crops. And those decisions, unlike a plate symbol, aren't so easily ignored.