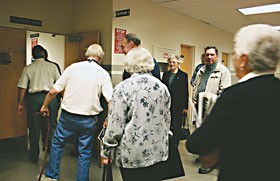 The long, sterile hallway on the second floor of the Humboldt County Courthouse — the waiting space for those with a court hearing — isn’t exactly known for convivial gatherings of eager citizens, hungrily scanning dry documents and all a-chatter with getting-to-know-you. No, this place is tension’s haunt: compressed voices, eyes anchored to floors or vague spots on blank walls, idle boasts and jokes amid cop clusters, last-minute lawyers’ advice, anxious mutterings of who wronged whom.

But Tuesday morning, such a jolly crowd! Around 8:15 a.m., a stray, uncomfortable person or two huddle on the hall’s end benches, while about two dozen others in their 50s and older — mostly older — massed in the middle benches, buzzing cheerfully. One half-expected someone to pass around the sausage-and-onion mushroom caps and cocktail franks and pour a little bubbly.

As well they should have: These were the prospective new Grand Jury members for 2007-2008 who, along with holdovers from the 2006-2007 Grand Jury, were about to launch a new year of investigations, jail inspections, citizen complaints and overall government watchdogging the likes of which ordinary folks only encounter in their most interesting patriotic dreams. They just needed to be “empaneled” — selected and sworn in — by Judge Christopher Wilson (standing in temporarily for Judge John Feeney, who presides over the Grand Jury). Then they could jump in — to long, virtually unpaid volunteer hours. Why?

Jean Vaughan, dressed in a pretty, gray-flowered blouse and with wavy, short gray hair, sat on a bench meeting the other potential new jurors around her. “I’ve been a volunteer all my life,” she said. “I’m a global volunteer. I’ve been in Poland, China, Romania, Africa, Greece” and more, teaching English to teenagers. Now she’s retired and lives in Willow Creek, where she volunteers at the family resource center. The Grand Jury “is something different.”

Next to Vaughan sat Carol Del Biaggio. “I have the time,” said Del Biaggio. “And I’m a team worker. I’ve served on the Ferndale Elementary School Board, and I’m currently on the Ferndale Museum Board. The Grand Jury — I loved their [recent] report. Their concern is for the community.” She says one thing she hopes to keep tabs on, during her term, is items confiscated in drug raids. “Are they secure? I just want to make sure everything is under lock and key, and not going back on the street under someone else’s profit.”

At 8:30 a.m., the Sheriff’s bailiff yanked open the door to Courtroom 3, shoved the doorstop in place with her foot and barked out that it was now open, and the gay crowd filed in and settled into the seats.

After the preliminaries, Judge Wilson read the names of the 14 new members — 13 plus an alternate (who ended up being Del Biaggio). They join the six holdovers from last year to make the 19-member complement that comprises the Humboldt County Grand Jury. Wilson explained the legal boundaries, and the public pitfalls, of service on the Grand Jury: “...you are not a detective agency ... the Grand Jury is not expected to advise county government ... most members of the news media are aware of your requirements for secrecy ... as officers of the court you are to act at all times with impartiality and fearlessness ...” He also cautioned them that, in spite of their greatest efforts at secrecy, “even to ask a simple question may darken a reputation.”

Finally they adjourned for their first session, in another room, for orientation and speeches. During a break, new juror Glenn Pritchard, 59, of Cutten, stood by the door. He retired to Humboldt County two and half years ago from San Jose, after 32 years with Hewlett-Packard. He and his wife volunteer for a local food bank, but he’s antsy for more. “My wife is on the Taxpayers League,” he said, “and I get tired of sitting around. ... I’d been on a murder trial, in 1998, in San Jose. It lasted about two months. And I just got interested in juries. You always hear about the Grand Jury. [But] I’d rather look into civil matters than criminal matters.”

Break over, they walked back into the room and closed the door. Later, there would be lunch at the jail.