Absynth Q and friends, Crooked Still at the Mateel, and folks home for the holidays 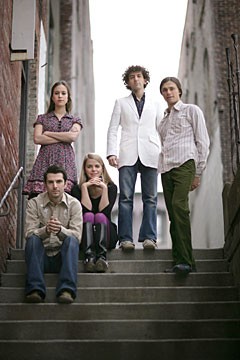 I heard it through the grapevine, second-, maybe third-hand: Absynth Quintet was allegedly breaking up -- again. A distraught Lila Nelson heard the story and offered mediation services. When I put the breakup question to AQ guitarist Ryan Roberts, he replied with a paraphrase from Mark Twain: "The rumors of our death have been greatly exaggerated," adding, "Don't know how that got started but we are all fine and dandy." And I'll testify that everything seemed fine and dandy when I saw the band play gypsy-ish jazz at the Jambalaya during last Friday's Arts! Arcata.

Ryan also notes that AQ has a gig Friday, Dec. 19, at the Red Fox Tavern with some very special guests. Former AQ fiddler Zebulon Bowles is back in town with his friend Rushad Eggleston, master of the electric cello. "Rushad is bringing up his own band, Tornado Ride, but will also play with us and Zeb," says Ryan.

For those unfamiliar with the work of Mr. Eggleston, he's a Berklee College of Music grad who pioneered the use of electric cello in bands like Fiddlers 4 and Darol Anger's Republic of Strings. In 2004 he founded the band Crooked Still with several other like-minded alt. bluegrass types in the Boston area. About a year ago he left that band to go his own way and form Tornado Rider, where he promises "a one-of-a-kind mystical experience driven by the mammoth power of an electric cello" and "powerful anthems about falcons, whirlwinds and pretty girls, which will haunt your brain for weeks."

By chance Rushad's former band Crooked Still is playing locally this weekend as part of a Year End Mateel Party and Chili Cook-off taking place Saturday at the Mateel (of course). Headlining that show are SoHum faves Peter Rowan and The Free Mexican Air Force, led by songwriter/Dead associate Rowan, the guy who wrote "Panama Red" for New Riders, among many other great tunes.

I'm pretty sure this is the first Humboldt appearance for Crooked Still. It's also a homecoming of sorts for one of the band members. After Eggleston left the band in 2007, two new players were signed up: cellist Tristan Clarridge and fiddler Brittany Haas, both of them coming from Anger's Republic of Strings. Local fiddle fans will recognize Tristan as one of the Clarridge Family Fiddlers (with his sister Tashina). Tristan is a champ: In fact he was the youngest winner of the Grand National Fiddle Championships in Weiser, Idaho, and he's managed to adapt those skills to play innovative bluegrass and Celtic music on cello.

Re: the Chili Cook-Off, the Mateel folks are "seeking anyone with a great chili recipe to put their skills to the test and enter this competition." Bring a big pot o' vegetarian or meat chili and serving equipment and you get one free ticket to the event plus a shot at a prize package including a 2009 MCC membership, a Mateel hat and T-shirt, "and more."

You'll also find Tofu at the Red Fox Saturday, Dec. 20, when Play Dead gathers for another tribute to the Grateful Dead etc. Rumor has it (via the grapevine) that former local keyboard wiz Mike Emerson will be in town for the pre-holiday bash. After Xmas, hard-workin' Mike has a couple of dates with bluesman Tommy Castro, then hits the road with Carlene Carter (June's daughter).

You've heard about hot yoga. Well, on Friday, Dec. 19, try WoMama's Winter Hot Box, a sweat-inducing all-ages blast at Redwood Raks featuring Afrockers WoMama plus the Janky Mallets' samba drumline, and worldbeat DJ Whitebeard (who lives down the street from me). "Come add to the fire," urges Jesse J, singer for WoMama and leader of JM.

As part of a jazzy weekend, head over to Muddy's Hot Cup Saturday evening, Dec. 20, to hear Bill Allison's Redwood Jazz Voices, an ensemble featuring Bill on piano leading a group that includes vocalists Calista LaBolle (Mike's daughter), Lorenza Simmons (Madi's daughter and a member of AkaBella) and Bill's son, Clay Allison, with Bill Andrews on bass and Brian Blakely on percussion. Allison has been doing a jazz piano brunch at Muddy's in recent weeks, including pieces done with some of his voice students (ranging from eight-year-olds to grown-ups). "Sunday's are more straight-ahead jazz, familiar tunes, some of my favorites," said Allison. Redwood Jazz Voices is something different. "It's a body of work that comes out of my work for the last 20 years," said Allison, "progressive jazz with voices as instruments on tunes by Monk, Mingus, Miles, McCoy Tyner and the like."

After brunch Sunday, head over to the Morris Graves Museum for the afternoon Jazz Jam (from 2-4:30 p.m.) featuring pianist Darius Brotman with bassist Shao Way Wu and drummer Ed Campbell and young Rose Armin-Hoiland on vocals. I've heard Rose sing a couple of times -- she has a fine and mellow jazz voice and will surely go far. And in case you were wondering, they will not be doing any Christmas music. "You can count on that," promised Brotman.

Around this time last year we were telling you about Eureka homegirl Sara Bareilles coming home for the holidays and a sold-out show at the Eureka Theater. She's back this weekend, this time playing two nights at the Arkley Center -- both sold out almost instantly. For those who have not been paying attention, Sara's career has taken quantum leaps since she was here last. Her hit single "Love Song," had already gone to No. 1 on the charts, and hung in the top 10 for weeks, now it's in the running for a "Song of the Year" Grammy. It doesn't get much bigger than that. But wait, she's also in the running for "Best Female Pop Vocal Performance," and Apple announced that her album, Little Voice, ranked in the top five for iTunes sales in 2008.

Former Weary Boy Mario Matteoli will be at the Jambalaya Monday Dec. 22, for a long-awaited Jackson Brothers reunion. In case you've forgotten former locals Detroit, Mudpit, Harpdog and Motorcycle Jackson, they've moved on to fame and fortune with The 3 Heads, Ignit and of course The Weary Boys. Like Sara they're home for the holly-daze, ready to play.

Last week we were talking about Making Blindness Fashionable 2008, the comp assembled by James Forbes to benefit Humboldt Council of the Blind. The disc is an awesome yet poignant snapshot of the Humboldt indie scene at a particular point just passed, poignant since many of the bands have since split and/or moved on (as almost all bands do). HCB's Peggy Martinez' No Not Yet is on there (she's off to Seattle). You've got The Ian Fays and The Broken Hearts (both moved), Eureka Garbage Co. (split), The Buffy Swayze (split), plus Dynamite Sweater singing about opening for The Buffy Swayze. And James has a couple of his ex-bands on there: Arrogant Hare and Henpecker (both split). You're not going to get all those Humpty Dumpty bands back together again; this will have to do. Get one at an indie music store near you, at the Lighthouse of the North Coast in Eureka, or with PayPal on myspace.com/methbogrecords.

With that shopping tip, I bid you season's greetings and adieu. I'm off ’til Xmas. Look for a sub-Hummer next week. Peace.