Graphene: The Future of Desalination? 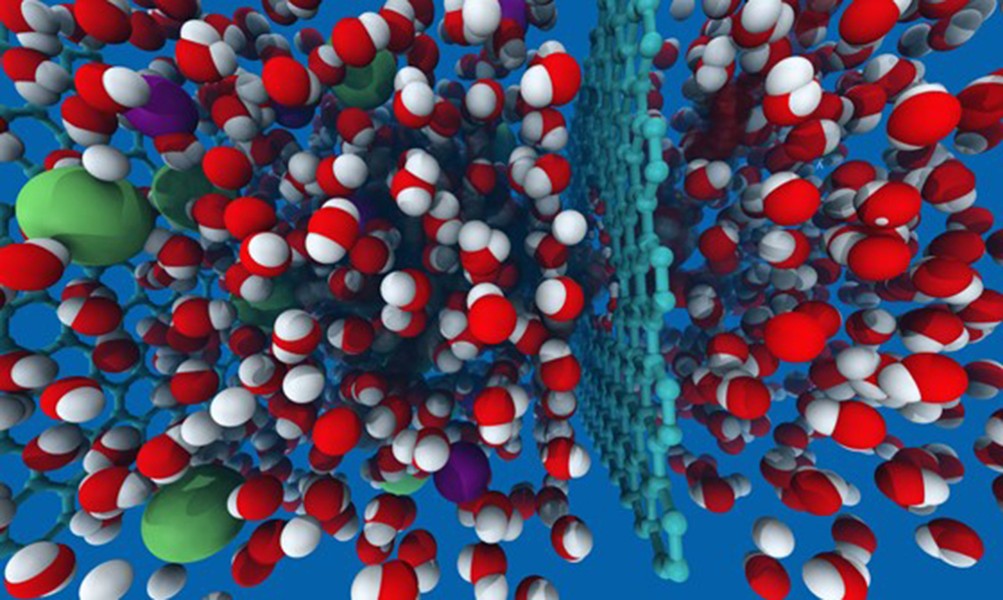 Image by David Cohen-Tanugi and Jeffrey Grossman. Creative Commons Seawater on the left, consisting of water molecules (red and white) and sodium and chlorine (salt) ions (green and purple), is forced through a single-atom-thick sheet of graphene having pores between 0.7 and 0.9 nanometers in diameter. The water molecules pass through to the right, while the larger salt ions are blocked.

"Water, water everywhere/Nor any drop to drink." Samuel Taylor Coleridge's ancient mariner was plagued by the same predicament as many people today who live near the ocean: They're short of fresh water and unable to drink from our planet's salty oceans. The problem is seawater is about 3.5 percent salt by weight but our kidneys can't make urine from liquid containing more than 2 percent salt. So paradoxically, if you ingest seawater, you'll be thirstier because your kidneys use any available water in your body to dilute that extra salt. Drink too much seawater and you'll die from dehydration.

With climate change creating drought conditions in many vulnerable places around the globe, researchers are pursuing new techniques to figure out how to desalinate salt water cheaply and efficiently, since there's so much of it. Of the many methods in use, the most popular is reverse osmosis (RO), in which salt water is forced through a polymer membrane that filters out the salt ions. Currently, RO is inefficient and costly, mainly due to the high pressure required (between 500 and 1,000 psi — the air in your car's tires is around 40 psi). Another problem is waste: For every 100 gallons injected into the system, between 5 and 40 gallons (depending on the size of the unit) comes out as fresh water, the rest being squandered as saline wastewater.

The good news is that RO systems are about to undergo a revolution, replacing polymer membranes with ultra-thin graphene sheets. Graphene is pure carbon, like the "lead" in lead pencils and diamonds, except it's essentially a one-atom-thick, two-dimensional sheet. The carbon atoms are arranged in the form of interlocking hexagons (think chicken wire). Due to its strong carbon bonds, graphene is inherently flexible, light and strong.

Although it's been known as a material for more than a century, researchers have only recently figured out to produce it in large sheets. Twenty years ago, graphene was being touted as a miracle material. Bulletproof clothing, ultralight planes, space elevators ("Elevator to Space," April 16, 2015) were all just around the corner (and still are). On the other hand, graphene's promise as an efficient RO membrane is rapidly coming to fruition, with several companies and universities (notably Massachusetts Institute of Technology and the UK's Manchester University) already prototyping desalination filters.

Because graphene is about 1,000 times thinner than conventional polymer membranes, it's much more permeable. If a municipal RO plant were to replace its current polymer membranes with graphene, still employing high-pressure pumps, the freshwater output flow would greatly increase. Alternatively, graphene offers a way of avoiding the costly pumps now in use, since graphene desalination works at lower pressures.

The problem that researchers are currently working on is efficient creation of precisely sized pores in sheets of graphene — finding the sweet spot that's not too large (or else salt ions can pass through) and not too small (so water molecules can freely pass — see diagram). One promising avenue is to pair the carbon with oxygen atoms, creating graphene oxide. It'd still be a one-atom-thick sheet but more workable than pure graphene and with excellent anti-fouling properties.

Desalination is fast becoming a public health priority. However, the recent advances in our ability to create and manipulate large sheets of graphene mean we're going to see a revolution within the next few years as these one-atom-thick carbon membranes come to the rescue.