'Gravyback' and the Drums of the Bora Bora 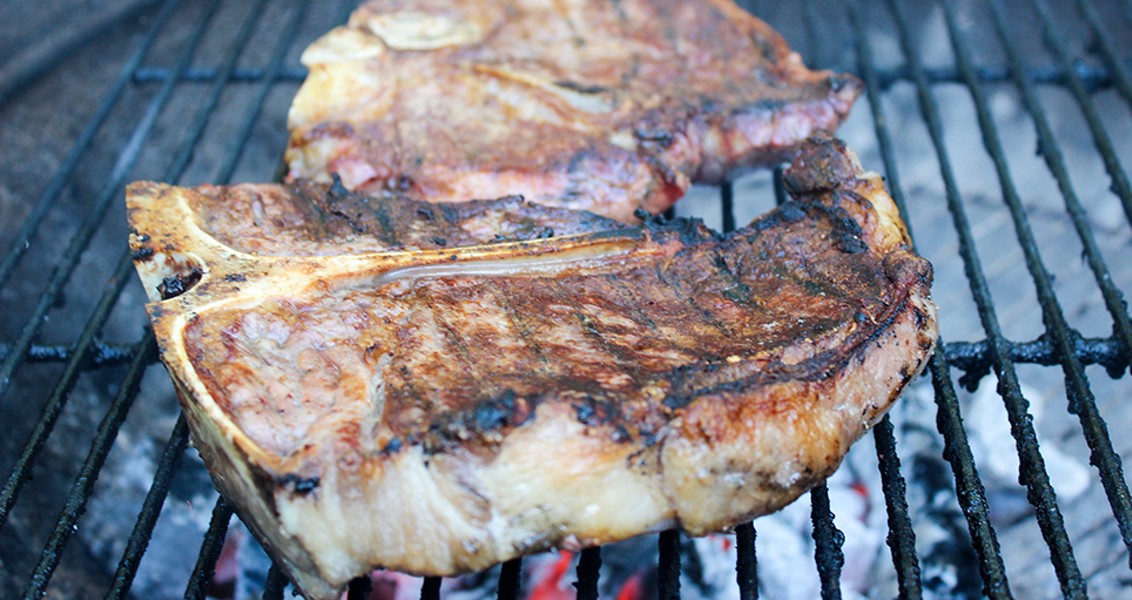 Photo by Thadeus Greenson Steak like Dad used to make.

As I was getting over the shock of my father's unexpected death June 1, 2012, I quickly began to realize how tremendously fortunate I was and am. While life-altering, his death did not leave me crushed with the regrets of things left unsaid or undone, nor with any lingering doubts about just how much I meant to him or of whether he knew just how much I loved him.

But as the days turned to weeks, weeks to months and months to years, my siblings and I did come to share one weighty regret: None of us ever got my father's two prized recipes.

My dad loved food in a broad, unconditional way, from ballpark sausages to the esteemed offerings of Chez Panisse. In his obituary, I wrote that he "approached each day with an appetite for life that sometimes left stains on his shirt." While that was largely metaphor, Daniel Greenson lived to eat and I'm pretty sure he didn't own a shirt that was without stain. (In young adulthood, his best friends saddled him with the nickname "Gravyback Greenson" after he left a table in Italy with a spoonful of gravy dripping down the back of his shirt. To his death, my father insisted he was set up by his dastardly friends and an unscrupulous waiter.)

As the stains — and the Gravyback nickname, more pointedly — attest, moderation was never my father's strong suit, a fact that was apparent in his prized meal: grilled T-bone steaks bathed in a salty butter sauce and served along a romaine salad with an avocado dressing known in our family as his "Bora Bora Salad." But for years after his death, we thought these simple delights — served at so many birthdays and celebratory dinners — had been lost. And none of us dared to recreate them without some kind of guidance for fear of somehow tainting the mouth-watering memories.

Fortunately, that changed on Father's Day of 2017. My brother Dave was in town visiting as my wife, Lisa, and I were busily getting ready to meet some friends on vacation. It was a friend's request that we each bring a favorite playlist that sent Lisa scurrying into the garage to fetch an old, dusty box of cassette tapes that she hoped included a prized mix. After she retrieved the box, as we pored through cassette singles and mixes, she grabbed an old TDK tape with a crooked white label scrawled with the words, "Interview with Dan Greenson" in blue chicken-scratch.

I looked at her blankly, recognizing my adolescent handwriting but unable to recall what the tape was or when I'd made it. We popped it in and she, my brother and I listened as the seventh-grade version of myself squeakily asked my father a litany of family history questions for a school project. Then, seemingly out of nowhere, I deviated from the script and Dave and I locked eyes, inching forward in our seats.

"How do you make your special steak sauce?" my younger self asked.

"Are you serious? That's not on there," my father protested, referring to the list of questions carefully prepared by my social studies teacher.

"That's my question," I persisted.

"That's not on that thing right there," my father objected once more before relenting and detailing the six ingredients.

My brother's and my eyes lit up again when my younger self continued the push, asking my father how he makes his famous Bora Bora salad — a dressing that has somehow endured since his college days in Berkeley, its name drawn from an old Drums of the Bora Bora record his roommate used to blast as my father mashed scallion and avocado into the fine paste that is the foundation for the dressing.

That night my brother and I made my dad's dinner, trying to pinpoint the proper ratios of mustard powder to garlic, of Worcestershire sauce to seasoned salt. In the months since, we've continued tinkering. The recipes below are approximate and should be modified to taste. After all, my father never measured anything. He just assembled the ingredients by sight before sampling with a spoon to re-season as needed, often dribbling a bit on his shirt in the process.

Turn on the broiler.

Grill your steaks as usual. Once they come off the grill and are resting, place the steak sauce mixture under the broiler until butter is melted.

Remove the baking dish from the oven and stir, returning it to the oven for another 2 minutes until the mixture is bubbling and frothing.

Remove from the oven. Bathe the steaks in sauce prior to serving and place the remainder of the sauce on the table for additional dipping, as desired.

My father suggested mashing the avocado with a "musher" but a potato masher or even a fork will suffice. He also insisted that to make this recipe "legitimately" you must do so while listening to the Drums of the Bora Bora so you can hear "the drums beating as you're mushing the avocado." Serves 4 to 6.

1 raw egg (use pasteurized if you're concerned about salmonella)

In a large salad bowl, mash the scallions and avocado into a smooth paste. Add other ingredients and stir until well mixed. Toss in lettuce until coated. Serve immediately.