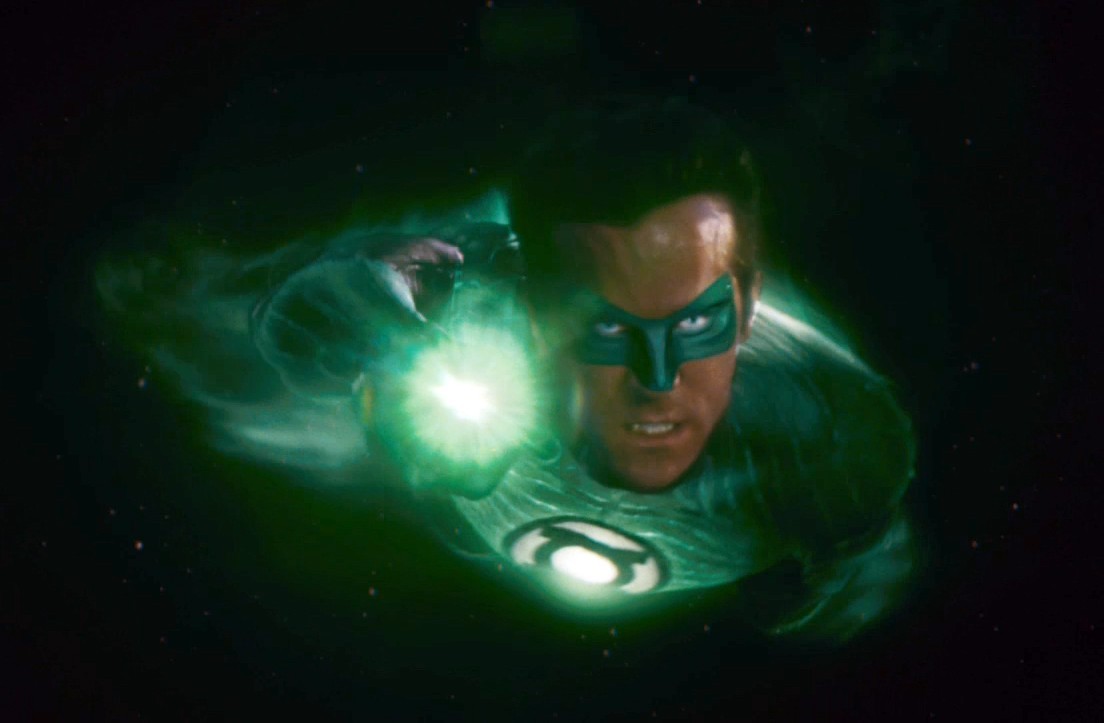 GREEN LANTERN. Every so often in the miasma of our local film offerings there is a brief moment of light. Such a moment occurred a week ago with Woody Allen's Midnight in Paris. But, as is too often the case, the moment proved ephemeral, serving simply to create a bit of hope only to cruelly smash it. So, what I get for Father's Day is Jim Carrey with a bunch of flightless but presumably cute birds and another superhero comic adaptation of a character that dates from 1940.

Okay, maybe I wasn't such a great dad, but I didn't think I was that bad. I thought I at least deserved Emma Roberts in The Art of Getting By, a film that opened nationwide on Friday in a nation that we must not be part of.

So, on the principle of the lesser of two evils, I opted for DC Comics over comic Carrey. As it turns out, Green Lantern is pretty much like almost all superhero film adaptations. Somewhere around 1 million years BCE, a group of Guardians using the "essence of willpower" was formed to protect the universe from the power of Fear, here incarnated as Parallax (surely one of the ugliest aliens since Alien). But Parallax's power has grown and now he is attacking the Guardians. One wounded Guardian crashes on Earth and sends out his green ring to find the next Guardian.

Enter screw-up test pilot Hal Jordan (a buffed Ryan Reynolds). As the first human anointed Guardian, we follow him as he gains his costume, does a few test runs of his new powers and saves a few Earthlings. But, will he find the quality inside himself that will enable him to save the world and win the heart of his Lois Lane, here called Carol Ferris (Blake Lively, who looks good in a variety of outfits)?

The film's tone is all over the map but its primary one is cheesy, which might have been all right once before better comic adaptations, such as the rebooted Batman series, came along. Cheesy would be a compliment for the acting.

While you ponder the question posed above, I will be busily hoping I didn't really see a sequel setup while suppressing the yellow powder of evil and finding my green light of fearless willpower. In that way, I may be able to conjure up a real film such as The Tree of Life, or even Emma Roberts. Hell, I'll settle for a film aimed at someone who graduated from the first grade. PG-13. 112m. 3D at the Broadway (also 2D) and Fortuna, 2D at the Mill Creek and the Minor.

CARS 2. Pixar, the (now Disney-owned) studio that continues to set the standard for computer animation, pulls another U-turn to Sequel Town, this time returning to the world of talking automobiles. Owen Wilson again voices Lightning McQueen and Larry the Cable Guy returns as bucktoothed tow truck Mater. For the second lap our intrepid gas-chugging protagonists collide with international intrigue and espionage as they compete in the first-ever World Grand Prix. Rated G. 113m. 3D and 2D at the Broadway and Fortuna. 2D at Mill Creek.

BAD TEACHER. The tagline -- "Some teachers just don't give an F" -- says it all. Cameron Diaz stars in this hard-R-rated comedy as a hard-drinking, pot-smoking, gold-digging seventh grade teacher with her eyes set on the hottie new substitute (Justin Timberlake). A sarcastic, pudgy gym teacher (Jason Segel) completes the meet-acute triangle. Rated R for sexual content, nudity, language and some drug use. 89m. At the Broadway, Mill Creek, the Minor and Fortuna.

BRIDESMAIDS. A lovelorn maid-of-honor navigates her way through wedding weirdness with hilarious results. Rated R. 125m. At the Broadway, Garberville and Mill Creek.

THE HANGOVER 2. Like the first one, but more Thai. Rated R. 102m. At the Broadway and Mill Creek.

PIRATES OF THE CARIBBEAN: ON STRANGER TIDES. Disney plants another money tree. Rated PG-13. 137m. At the Broadway, Garberville and Mill Creek.

SUPER 8. Strange disappearances in a small Ohio town have citizens baffled. Rated PG-13. 112m. At the Broadway, Fortuna, the Minor and Mill Creek.