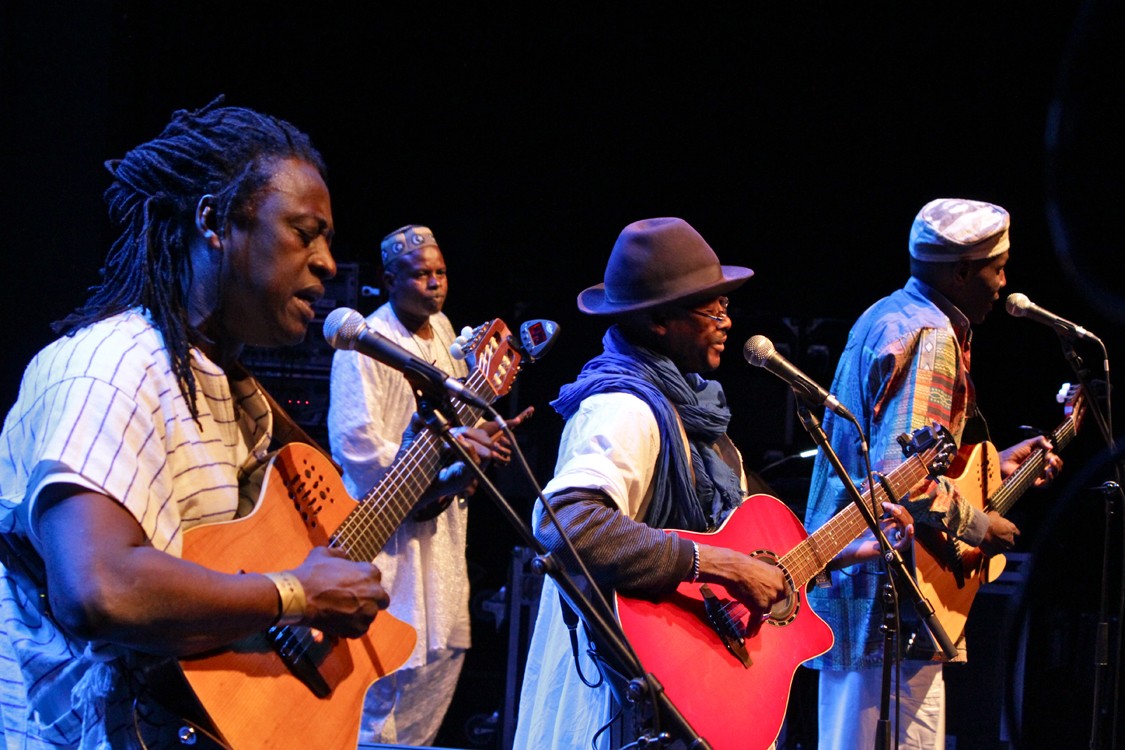 They call it "Acoustic Africa," the tour featuring three stellar guitar players, Oliver Mtukudzi from Zimbabwe and Afel Bocoum and Habib Koité, both from Mali, backed by a traditional African band. The styles of the lead musicians vary, but they share a common respect for their music heritage, coupled with a willingness to adapt and embrace the modern.

The son of a musician, Afel Bocoum started his professional career at 13 playing with his uncle, the late great Ali Farka Toure. In the '80s, Bocoum founded his own band, Alkibar -- the name translates as "messengers" in his native tongue, Sonrai. He takes the lead on guitar on his bluesy, neo-traditional Malian songs, shifting vocals between Sonrai and Tamashek, the language of the Tuareg, the nomadic Berbers of the North African desert.

Oliver "Tuku" Mtukudzi began out in the '70s in a band with noted Zimbabwean musician Thomas Mapfumo, playing what Tuku calls "copyright music," cover versions of popular songs of the day, especially by American soul artists. It was a time of upheaval in their native country -- then known as Rhodesia -- with rebels fighting to drive out the colonial government. Music became part of the battle, in particular a style called chimurenga, with lyrics demanding social and political change, and a sound that echoed the traditional thumb piano, the mbira, adapting it for electric guitars.

"When I started writing and recording my own music, we would sing about grievances of the people and about the revolution itself, right until the independence in 1980," said Mtukudzi. After the revolution succeeded, his music still dealt with the issues of the day. "I believe a song should have a message, something people can learn out of it. Each song has its own message: I talk about AIDS awareness, I talk about child abuse, and I talk about cultural maintenance. I talk about a lot of things."

Habib Koité writes his own songs, but the roots of his music run deep. As he explained when we spoke last time he came to Humboldt, his family name links him to the griots, court musicians who passed their skills and their songs from one generation to the next.

"We are griot, even if we don't do music," he said. "It is a line of griot since the Mandinka Empire. My father was a musician, but not to make money. He had another job, he worked on a train, but he played all the time. My brother and I followed my grandfather and the father of my grandfather, they were musicians, griots."

While he draws on the tradition, he does not feel bound by it. "The way I play guitar, it is not only about griot. I am griot, but I play many kinds of music. Many things have changed since the days of griot, but one thing is the same: We play music to make a message, to say something to the people. That has not changed; I do the same. I try to say something with my music. The music always has a message."

And what is the message? "The message is about peace, about compassion, about how people can stay together with tolerance."

CenterArts presents Acoustic Africa with Habib Koité, Oliver Mtukudzi and Afel Bocoum on Tuesday, March 22, at 8 p.m. in HSU's Van Duzer Theatre. Tickets are $35, $25 for HSU students and are at The Works, the HSU box office, 826-3928, or online at humboldt.edu/centerarts.