Brave hearts and other innards 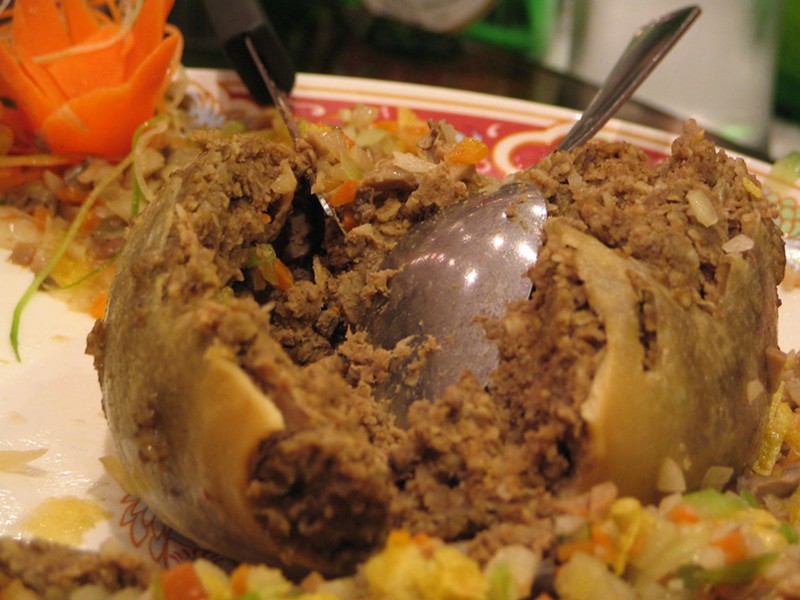 Mourn now, ye true lovers of all things Scottish, for you cannot get an authentic haggis in the U.S. of A. This centuries old peasant's dish, elevated to the fare of lairds and ladies, is made from ground lamb innards (heart, lungs and liver) mixed with oats, spices and suet, then boiled inside said lamb's stomach casing. On your plate, the finished product looks a wee bit like stuffing. The taste has been compared to Tofurky and corned beef hash. It is delicious.

But one can find neither lamb lungs nor stomach casings on this side of the pond due to health regulations. A few years ago a friend and I pestered a local slaughterhouse into helping us realize our haggis aspirations. In an attempt to stall us, they put their only Spanish-speaking employee on the phone. Little did they know I can talk about organ meat in Spanish all day long. We retrieved our dubious cargo from a bucket left on the slaughterhouse steps and set to work.

It's a true friend who will spend the afternoon boiling organ meat on their stovetop for you. Stomach casing, we soon found out, smells pretty awful. About two hours in, we suffered the dreaded haggis collapse — the casing burst and created a soupy mess. Haggis fail. The neighborhood cats ate well that night.

On January 25 of this year, I set out for the Scotia Inn for a glimpse of what an expertly made haggis might look like. Dorris and Daughter Catering was hard at work preparing for Robert Burns' birthday (his 255th this year), an event celebrated annually across the world by Scots, would-be Scots and Scotch whisky enthusiasts. Robert "Rabby" Burns, the Scottish answer to Byron in both poetic genius and philandering, composed odes to a number of important subjects (field mice, whisky, women and lice) but his "Address to a Haggis" is unrivaled in the canon of meat pudding related poems:

Following the recitation of this poem, it's traditional to toast Burns with a wee dram. Then an attendee in full clan regalia ceremoniously cuts the haggis. With a sword.

But that was hours to come — haggis is a good afternoon's work. In the kitchen, chef Robert Crouch was busy grinding up beef heart and lamb shoulder to be mixed with chopped onions, steel-cut oats and seasoning.

Caterer Jeanne Dorris has prepared the haggis for the North Coast Scottish Society's annual Burns Night for five years running. "The first time I was completely a wreck over it," she confessed. "It was nothing I had made before. But they liked it. They even asked for leftovers to take home."

This last statement was spoken with an incredulous lift of an eyebrow.

Instead of boiling it in a casing, Dorris prepares the Americanized version more like a meatloaf — baked in a large roasting pan and covered in foil to keep it from browning. (One expects authentic haggis to have a greyish hue.)

Chieftain Denise Ryles of the Clan Campbell, master of ceremonies for this year's Burns Night, acknowledges that "it's not true haggis," but she said that Dorris has always given it a bonnie good try.

Ryles also revealed that Burns Night, the North Coast Scottish Society's biggest gathering of the year, had become so popular that a rival event was being planned at the Carson Mansion. Two haggii in one day? I headed northward.

For an exclusive place that once didn't even allow women, the Ingomar Club is remarkably easy to infiltrate. I strolled through the open gate past the "No Trespassing" signs and down the drive unimpeded until I found the kitchen. Alarm crossed the face of a besieged-looking man in a chef's uniform as he spotted me waving from the courtyard. But he gamely came down and answered my questions.

No, they weren't cooking haggis. It "hadn't worked out," so they were making some other Scottish dishes. I recognized the look on his face. It was the look of someone who couldn't talk about organ meat in Spanish. Amateurs. Better luck next year, boy-o, and let's all raise a dram to Rabbie Burns.