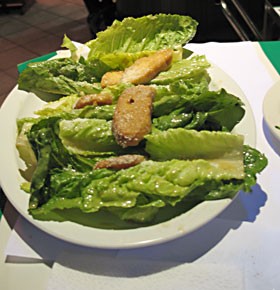 I never truly realized what a Caesar Salad was until 1969. We were celebrating a special occasion, and my girlfriend insisted that we go to the legendary Paul’s Duck Press, then the most elegant and exotic restaurant in downtown Los Angeles.

Don’t bother to Google — you’ll find only two references to Paul’s Duck Press; one has a quote from Dining Out In Hollywood and Los Angeles by Craig Davidson (1949). It reads, “You will offend him ... if you don’t order Romaine ala Paul, because he tosses it up with the dressing he invented 30 years ago and never changed, and which now is known in Los Angeles as Caesar dressing. The name ‘Caesar Salad’ was given the dressing by Paul’s former partner in Mexico, whose brother bore that name. This is the real dish and Paul mixes it at your table and dresses long cool green leaves of Romaine — uncut.”

Alas, there are half a dozen “real” origins of Caesar Salad, and it’s likely more than one holds an element of truth. Paul Maggiora was indeed a partner of Caesar Cardini and his brother Alex in the Hotel Caesars in 1920s Tijuana. Julia Child, who had dined there as a girl, sought out the inventor’s daughter, Rosa Cardini, for the recipe, which she then published. It differs from most in that whole leaves of coated romaine lettuce are intended to be lifted by the stem and eaten with the fingers. Neither anchovies nor croutons are included. This may be a sincere recollection, but it is not what became traditional in the 1930s and ’40s.

Paul’s Duck Press was, like its peers — Chasen’s, The Brown Derby, The Mocambo, Perino’s, Musso & Frank Grill and Scandia — at the end of an era. They were legends built on celebrity, where well-heeled regulars could demand and get virtually anything, although the cuisine was often remarkably lowbrow. (The famous chili at Chasen’s was ground filet mignon in a spiced, cornstarch-thickened tomato sauce.) But since I was hardly a member of that society, I was fortunate to have one memorable meal there.

By the way, pressed duck (see www.epicurious.com) is something one should have at least once. Famously complex in its preparation, there is nothing quite so transcendent. Like Russian caviar, black truffles or foie gras — it’s something you might taste only on a single occasion in a lifetime, yet still be forever touched by.

But that’s not today’s topic.

Caesar Salad is something else — an invention that almost anyone can be touched by, if they are willing to take the trouble. Even in Humboldt County. We most recently had a good Caesar Salad at Sunset Restaurant in Cher-Ae Heights Casino. Before that, the best we had tasted locally was at Avalon, in Eureka, soon after they first opened, nearly a decade ago. It approached perfection.

There are recipes so demanding they are virtually impossible for any but the most skilled cooks, using rare ingredients. Caesar Salad is the opposite of these: Anyone who takes the effort can make it. The problem is not the difficulty — the problem is that the detail and time involved are incommensurate with the price a restaurant can charge. The ingredients are relatively cheap, but the labor is intensive. Customers do not want to pay $20 for a salad for two. Yet if done right, that’s a reasonable price.

Let us be clear at least about the primary ingredients: avocado, tomato, bacon, grilled chicken, shrimp or salmon have nothing to do with Caesar Salad. Aside from what is in it, the essence of the dish is that it was traditionally prepared at the table, usually by the maitre d’. This is a difficult concept for modern diners to accept, as it evokes an age when personal attention was what restaurant dining was all about, when a relationship with the headwaiter was critical to the success of a meal.

Freshness of all components is thus a critical element. Needless to say, anything that uses a bottled dressing is hopeless. Yes, that includes “Cardini’s Original Caesar Dressing.” Sorry.

To return to our history lesson, the most credible story is that during the early years of Prohibition, American airmen (“The Army Air Corps”) stationed in San Diego would drive to Tijuana for booze and sex, and Hotel Caesars on Avenida Revolución was a nexus. Late one night, a large, rowdy group demanded food. The kitchen had closed, but the resourceful hotelier went back to see what could be found. There wasn’t much: chilled romaine lettuce, leftover French bread, eggs, a block of Parmesan cheese, olive oil, lemons (some say Mexican limes), garlic and Worcestershire sauce. Somehow Cardini combined it all into an instant feast. And he called it ... fanfare ...”Aviators’ Salad.” And so the name continued, for at least a few years.

One later contemporary account rings true, from a former kid who’d sold lobsters to the hotel: “I accepted his offer, and was treated to the famous Caesar’s Salad prepared by himself. It was quite a show. He stood up at the head of his table, and his waiters handed him each ingredient, which he introduced to his famed mixture. Each time he mixed it in, he would toss it with his forks into the air, especially when his ‘dressing’ was prepared. The waiters served each guest at his command and he would raise his glass of wine and toasted us all.”

The classic American version of Caesar Salad evolved from the Tijuana original in the ’30s, when it appeared at Paul’s Duck Press and spread to Hollywood. (By then, it had acquired anchovies.) A consensus on the recipe can be found in books by James Beard, Craig Claiborne and James Villas. Traditionally, the salad is made with uncut leaves of baby romaine lettuce, but the earth will not fall off its axis if you tear them into manageable pieces.

Caesar Salad is not a dish that invites innovation, but sometimes variation is salutary: The salad at Sunset Restaurant is served in Parmesan cheese nests (a circle of shreds melted briefly in the oven, then scraped off the baking sheet and formed in a soup bowl).

There is a YouTube video on the preparation of a Caesar Salad at a Tijuana restaurant next door to the legendary hotel. It is mildly interesting, but not entirely authentic — for example, the entire sauce is mixed in the bowl before adding lettuce — but it’s innocent enough. Some people are concerned about the safety of Caesar Salad due to the potential risk of infection by salmonella bacteria occasionally found in raw eggs, and later versions of the recipe call for coddled or hard-cooked eggs. Fresh eggs, kept chilled, and washed only before using will minimize such risk.

2 eggs, coddled (boiled for one minute), and let return to room temperature

ground pepper and salt to taste

Chill dinner plates, forks and knives (if serving whole leaves). Mince or press the garlic, then mash it into a paste with a tablespoon of olive oil, anchovies, mustard and salt. Sauté the bread cubes in butter until lightly crusted. Arrange lettuce in a large bowl.

If you wish to be dramatic, all the ingredients may now be brought to the table for final assembly. Dump the garlic/anchovy paste mixture over the lettuce and gently toss with a salad fork and spoon, scooping the leaves toward you in a slow roll; try to lightly coat the lettuce, without letting everything become glommy.

Now add the rest of the oil, grind the pepper to taste and toss again. Pour on lemon juice, Worcestershire sauce, Tabasco if desired, and break in the eggs. Toss, sprinkle on the cheese and toss again. Add croutons, toss twice more and serve.

Editor’s note, an additional word of warning: My wife, Amy, and I had Caesar Salad, prepared tableside, at the famous Hotel Caesars in Tijuana while vacationing this past spring. To be exact, Amy had a full salad while I ate a not-very-good Mexican combo plate, and merely sampled her tasty Romaine leaflets. Upon our return Amy fell ill, suffering severe gastrointestinal symptoms that a doctor told her were consistent with some form of the famed Montezuma’s Revenge, perhaps giardia, which quite possibly came from improperly washed lettuce. Great salad, though.

P.S. We love the Caesar Salad at Gabriel’s, where they do not skimp on the garlic and anchovies.

This week Joseph Byrd is attempting to reverse-engineer Thomas Keller’s ultimate, eponymous dish from Ratatouille . Write him at eat.your.spinach@gmail.com.