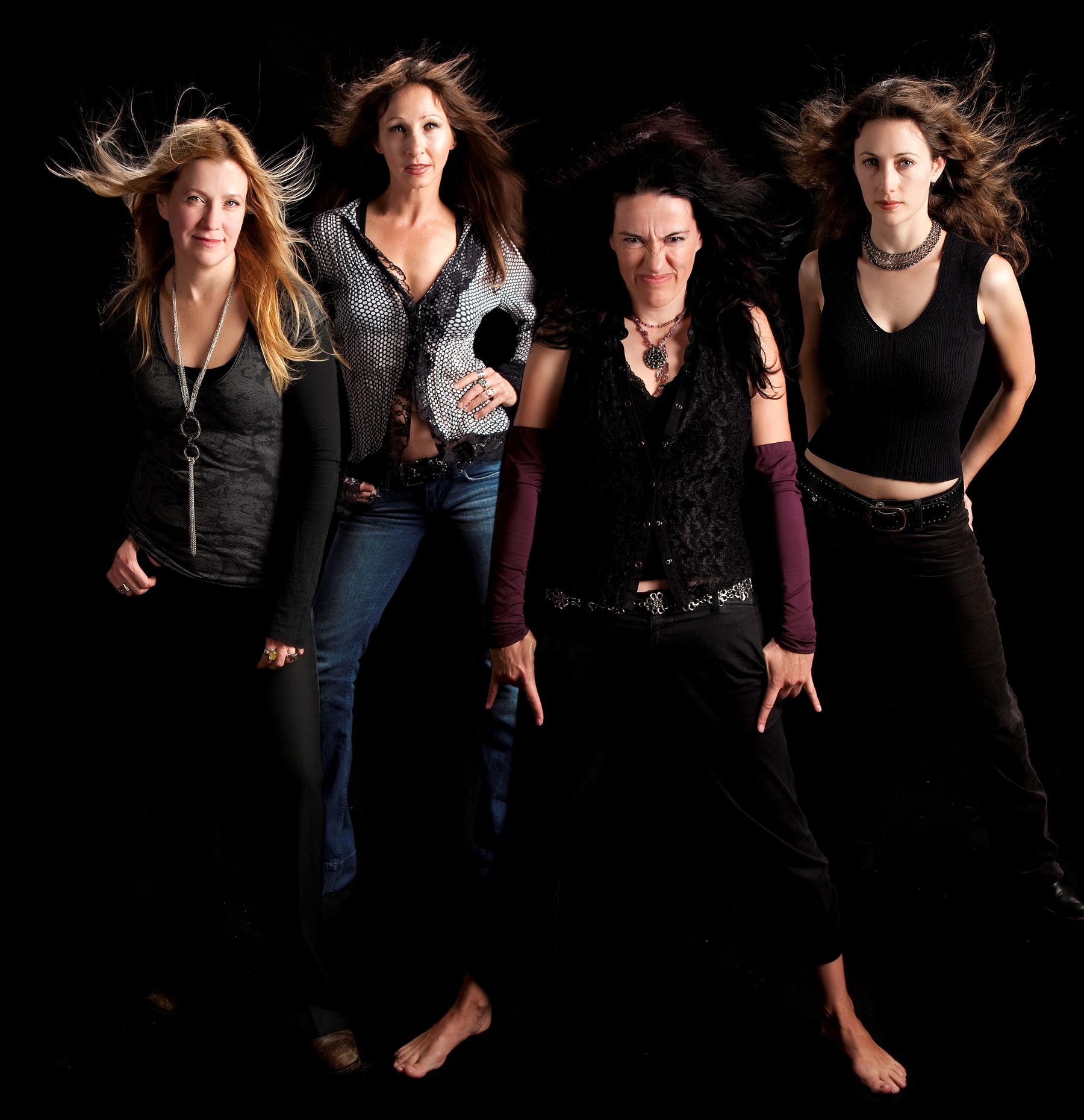 Got one of those exponential Fw: Fw: Fw: e-mails the other day. It claims, "An interesting fact about October 2010: This October has five Fridays, five Saturdays and five Sundays, all in one month. It happens once in 823 years..." Then it goes on to insist that this bogus factoid must be forwarded to eight friends so that "money will appear." Truth is, three days are repeated in any month with 31 days and the calendar repeats every few years. You can figure on another long Halloween weekend like this one in 2017.

Yes, Halloween, aka All Hallows Eve, falls on a Sunday (the day before All Saints Day). All Hallows is an old Christian celebration gone Pagan and secular, given over to jack-o'-lanterns, candy extortion by kids (see Calendar), zombie and/or sexy whatever outfits for adults. Many will be trying to lure you to their costume party -- all weekend.

We'll start with Bring Out Your Dead!, an Ink People all-ages thing Friday evening at Manila Community Center benefiting Blue Ox Radio, with haunting music by The Monster Women, The Solitary Men, Manilapede and Mr. Moonbeam along with a "beer graveyard," free food and swell prizes for costumes (a given for most of the below).

Saturday's Hallows Eve Hip Hop Ball at the Jambalaya marks the release of Fresh Coast Connection Vol. 1, a local collection with 18 tracks recorded by Piet Dalmolen. "It's a group that started at HSU," explains Berel Alexander, who makes a brief appearance on the CD. "Kind of a Bay Area meets Humboldt ’80s sunset with a ’90s beat slap. AC [Alex Carpanos] makes the beats; his partner is Charlie Fowler aka Tha Fowl. Ryan Bachers is 4DB, a radio personality from KRFH and a rapper, and there's Iceman. Those are the main dudes, but there will be cameos, including one by me." Elision from Sub Sab and Theo from Afroknots crew throw down an opening set.

Across the way at the Arcata Theatre Lounge, ballsy all-woman Led Zep cover band Zepparella headline, twice: A 6 p.m. show has Steve Watts and The Humboldt Allstars opening; at 10, S.F.-rockers The Stone Foxes open for the hard-rockin' foxy ladies. (Note: Both shows are 21+.)

The Bucky Walters host a stringy pre-Halloween show Saturday at Redwood Raks with Absynth Quintet and The Shook Twins, a "progressive folk duo" from Portland. Says B. Walters' Bryan Osper: "Their music could be described as 'a little out of folk-us,' because although they use banjo and guitar and feature haunting duet harmonies, they also make great use of beat-boxing, loop pedals, ocarinas and giant egg shakers." Expect some collaboration between the three bands.

In Doonesbury this week, über-hippie Zonker lays out his post-Prop 19 dream: growing hemp in the Cali backcountry and becoming "a small family farmer." Of course, a family is required. Asked how he'll "meet someone in the wild" he responds: "I think they have square dances." They do indeed. In fact, Humboldt Folklife has a Barn Dance Saturday at Arcata Vets Hall with The Knuckle Knockers from San Fran and caller Michael Ismerio. Costumes encouraged. (Petticoats anyone?)

Ska/funk/punk faves Fishbone headline the annual KMUD/Mateel Halloween Boogie Saturday at the Mateel, with hip hop by Lifesavas, Afro-punk by The Memorials, a Day of the Dead altar, food, drink, the ubiquitous costume contest, etc.

The Humboldt Symphony celebrates Halloween Saturday in Fulkerson Recital Hall with a program including some spooky classical warhorses: Mussorgsky's "Night on Bald Mountain" and "In the Hall of the Mountain King" from Grieg's Peer Gynt.

Nocturnum invites you to "party with the undead" at their Saturday night Halloween Bash with DJ Buddy and DJ Ninja. First place in the midnight costume contest wins $100.

"Scary" Heights Casino has "The Evil" Dr. Squid rocking the Firewater ... although that band is so nice, it's hard to imagine them being evil.

The Red Fox has the first of two Halloween parties Saturday, with a hip hop/R&B/reggae night featuring Medusa "The Gangsta Goddess" from L.A., Mike Marshall from Timex Social Club (the hip hop dude from the Bay, not the mandolin player), Ishi Dube ... "and more!"

The Li'l Red Lion has a rockin' Halloween thing Saturday with The Fire Demons, The Hard Ride and Strength from Portland.

Reggae? The Wave has Synrgy and Dharma Dojo on Saturday, while Night Hawk (not reggae) is in the Sapphire.

Sunday, Halloween proper, Yogoman Burning Band has a CD release party at Six Rivers for the Washingtonian band's third album, Beam Me Up! (financed in part via Kickstarter.com). SambAmore opens.

It's more rock show than a Halloween thing, but guitarist Doug Martsch and his veteran indie band from Boise, Built to Spill, play The Depot Sunday night on a tour with Boise trio Revolt Revolt (straight from two nights at the Fillmore).

Deep Groove Society has its Sunday dance groove night at Jambalaya on Halloween with Qbik plus Grasshoppa and Boss Levels. "This will be a costume encouraged event," says Deep Groover Derek Watts.

Hip hoppers and dubsteppers team-up for Dub De Los Muertos Sunday at the Eureka Vets Hall with Potluck, Franco, Masta Shredda and Mike D, among others.

Pre-Halloween action: The dubstep crowd will be at Arcata Theatre Lounge Thursday for VibeSquaD, Heyoka and Resident Anti-Hero.

Thursday is a special day for local keys whiz/music mover and shaker Brian Swislow, and to celebrate he invites you to, "Come celebrate my birthday with lots of my funky ass friends," at the Red Fox (where he is now part-owner). B Swizlo's Massive Hip Hop Birthday Celebration features The Hip Hop Lounge, a pioneering live backing band Swiz put together a decade ago playing behind his friends Garth Culti-Vader, Ishi Dube, Jamezboy, Berel Alexander and Vidagua with DJ Just One on the tables. More special guests (from Atlanta) The Axis featuring Cherry Royale, Rock Most and The Sixteen Bars Hip-Hop Orchestra.

The next night, Friday, at the Red Fox Bad Kitty brings back Wayne "The Train" Hancock to lay down some juke joint swing with Carlotta country swingers Falling Rocks opening.

The music rolls on post-Halloween at the Red Fox: Bad Kitty presents a punky Halloween-esque psychobilly show Tuesday, Nov. 2, with Koffin Kats from Detroit and The Creepshow from Toronto.

On All Hallows Day (Monday), guitar player/diabetes spokesman Riley "Blues Boy" King braves the CenterArts curse to play the blues on a guitar named Lucille at HSU's Van Duzer Theatre for what promises to be a standing-room-only crowd.