Hanging With the Hipsters 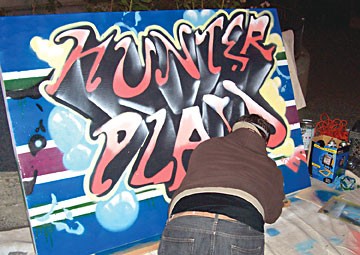 On the table are several half-empty bottles of cheap wine and sparkling pear cider, a plate of brie and strawberries (or the remnants of what was), as well as a fancy chocolate cake in honor of Jeff Hunter's 27th birthday. It also happens to be November Arts! Arcata.

"This is our third Arts Arcata event and, well, it doesn't get easier and easier, but it's fun," says Kristen Hunter, one of three co-founders of the Hunter Plaid Gallery, as she sits greeting people in the front room. "It's nice to have a place where people are comfortable," she continues, which they certainly seem to be. Walking into the gallery out of the cold, dark night is a pleasant surprise, as bright lights and loud music mix with bursts of laughter and conversation from smiling hipsters gesturing nonchalantly to this or that, empty wine glasses in hand.

Hanging from the warehouse ceiling are the canvas zeppelin models of Matt Porr, one burned in places exposing the wire frame, frozen in its slight downward trajectory. "What we wanted was a place to show art for the sake of art, not just coffee shops or restaurants where a lot of people resort to showing their work," says Porr, standing in front of his futuristically robotic, deep-sea sketches. Porr is one of seven artists and three bands that pay to share the studio, gallery, practice space, jewelry and sculpture lab that is the Hunter Plaid Gallery and Studio founded by Dustin Plaid, Jeff Hunter and his wife Kristen earlier this year.

"We really wanted a space for all kinds of expression, be it sculpture and painting or music and performance art," says Porr, adding that there's still studio space available for interested individuals in any medium.

Set apart from the excitement of the large open studio where busy, chatty crowds stand blocking most pieces from certain shorter individuals (e.g. moi), is the studio's small entry-way gallery, crowded with large and colorful pieces that make up the night's opening show, Jeff Hunter's "Coffee Shop Blues." The walls here are sparse and white illuminated uncomfortably by florescent lights set into the low ceiling. Two small tables draped in green vinyl stand opposite each other near the door. At one sits Kristen Hunter, encouraging people to grab a cup of joe from the opposing table, which is littered with creamer and coffee cups. It's not certain which container of spoons is dirty or clean and it's recommended that you simply go for it and hope for the best, as one girl does, stirring the contents of a Sweet 'n Low packet into her brimming thrift-store mug.

"We started this all a few months ago but had been wanting a space like this for a while," says Kristen Hunter. "Trying to do our art at home is just so distracting, what with our cats and all." Describing the show, she motions to the canvases around us, all but one of which has been completed within the last month. Based on original sketches taken from Jeff Hunter's coffee shop doodles, a tiny stack of booklets containing the reproduced drawings is being sold for $8, "so everyone can take something home, even if they can't necessarily afford a piece," she says.

Back in the open studio, as the wine is finished off and it's formally recognized that the brie is no more, a phone booth and two movable walls are pushed from the center to the far side, opening up a dance space and clear view of a massive screen upon which Dustin Plaid projects an array of psychedelic patterns paired with distorted slides. After a sound check that startles a couple debating a piece of Sam Kirby's work near a large stack amp, the two local acts for the evening begin their set, hidden from the audience below in the practice space above. On goes the PA and off go the lights as a barrage of drum, horn, and reverberated vocals, thelittlestillnotbigenough and Plush Fuzz (the latter members of the Hunter Plaid co-op) overwhelm the room.

The audience uses the open space to dance in the dark or admire the projected patterns for a couple of songs before the computer freezes on one image of a meadow that stays on the projected screen for some time due to uncertain technical difficulties. As midnight rolls around, most of the onlookers have moved on or left the bass-filled dark of the studio for cigarettes out front in the freezing cold.

A tired Jeff Hunter takes Kristen's place at the front table, accepting birthday congratulations with a wide smile from friends and newcomers alike as they make their way toward the door. In preparation for my own walk home, I make a run to the bathroom where I discover one of the coolest pieces in the place: a large stretch of fabric with a collage of cassette tapes burned into it by Kristen Hunter, is hanging adjacent to the toilet. I wonder if the price tag is "as-is" or could be bartered on grounds of sanitation. I guess we'll have to see.

The next show at the galley is a "Small Works Invitational" with pieces by co-op members and friends, all priced "$100 or less," which sort of puts it in the vein of a holiday show, but not really. The exhibit runs for two months starting with an Arts! Arcata opening (with music TBA) on Friday, Dec. 12. The Hunter Plaid Gallery is located at 550 S. G St., Arcata, and is open from noon to 6 p.m. Wednesday through Sunday.