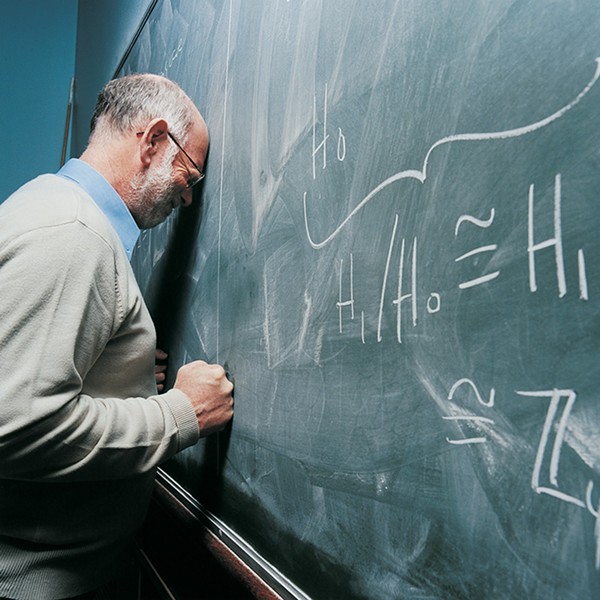 Happiness is as elusive as ever, even in this republic, one of whose foundation documents prioritizes our right to pursue happiness. While our standard of living (along with the average size of our homes) has doubled since the 1950s, the number of us claiming to be "very happy" in polls like the Harris Happiness Index has remained unchanged at around 30 percent. Meanwhile, clinical depression is at least three times — maybe 10 times, depending on the assumptions — as common as it was 50 years ago.

There's happiness and happiness, of course. In The Devil's Dictionary, Ambrose Bierce defines it as "an agreeable sensation arising from contemplating the misery of another." He was talking about what the Germans call schadenfreude, like the delight you secretly feel upon hearing how horribly your co-worker's vacation went. "Oh, I'm so sorry, that's such a shame," you say. Schadenfreude isn't limited to this earthly realm, either. "In order that nothing may be wanting to the felicity of the blessed spirits in heaven, a perfect view is granted to them of the tortures of the damned," explained Thomas Aquinas helpfully in the 1200s.

On Earth or in heaven, this sort of happiness at someone else's expense can only keep you going for so long (and you've got all eternity to fill in heaven). In a delicious essay provocatively titled "Is God Happy?" Polish philosopher Leszek Koakowski proposes that happiness is something we can only imagine, not experience (New York Review of Books Dec. 20, 2012). Short of being sociopathic, can you or I (or God) really be happy in a world filled with suffering?

The philosophies that go by the collective names of Buddhism, Hinduism and Epicureanism have been noodling the nature of happiness for a couple of thousand years or so. It's pretty simple, they say: we're unhappy when what we want and what we've got are out of whack. So what do we really want? To be happy with what we've got, duh. (And you thought philosophy was complicated.)

Fortunately, the young science of evolutionary philosophy has come to our rescue. It doesn't exactly offer the solution to happiness (there is none) but explains — quite convincingly, I think — why trying to be happy is akin to chasing our tails. Our genes don't give a rat's backside whether we're happy or not, says evolutionary philosophy; all they care about is surviving and reproducing. And survival, back on the African savanna a million years ago, was all about worrying: where your next meal was coming from, whether the waterhole would last the dry season, how you could convince someone to mate with you. "Happiness" was practically synonymous with getting eaten by a saber-toothed tiger. Bottom line (say the evolutionary philosophers): We're supposed to be unhappy! Discontent and survival went hand in hand in the Pleistocene epoch, and we've inherited most of our ancestors' proclivities.

It gets worse. (Or better, depending on whether, armed with this information, you're able to sit back, relax and enjoy the rest of the trip.) Daniel Gilbert is a happiologist (I made that up — he's a psychologist) at Harvard University. After 25 years studying the topic, Gilbert concludes that we treat our future selves as though they were our children, "spending most of the hours of most of our days constructing tomorrows that we hope will make them happy." You think, "If I work double shifts, I can pay off my Visa card in a year and then I'll be happy." A year later, you're out of debt, but you're worn to a frazzle, you've forgotten what it's like to go out on a date, you've put on 20 pounds and you look back at that decision from a year ago and think, "Stupid, stupid, stupid!" In a word, our future selves are, or will be, ingrates.

My next life, I'm coming back as a dog — a self-satisfied, tail-wagging, unconditionally loving border collie who won't give a woof about happiness.

is never happier than when he's working