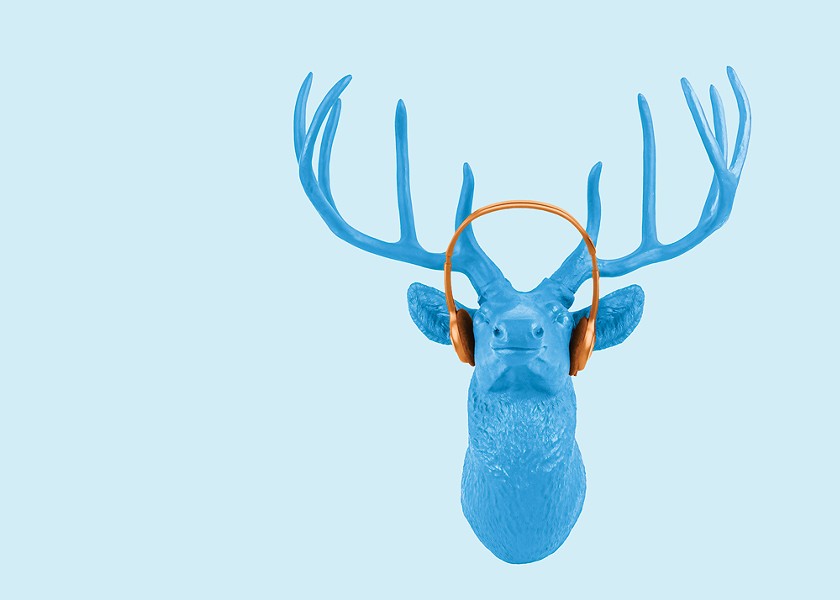 Well, here it is, the first Setlist of winter and the last one whose dates are entirely booked within the year 2022. This has been a rough year for a lot of us. I certainly haven't enjoyed it much and I look forward to the future as always, thinking about that quote I like to occasionally flog around from Warren Ellis' excellent Transmetropolitan series, where the tattooed, bald, boozy, weirdo journalist (no relation) Spider Jerusalem reminds us, "The future is inherently a good thing." I still abide by that notion; it keeps the pistons running on those cold mornings when the steam from my lungs looks like the exhaust of defeat. I grab onto mantras — Ren and Stimpy have since childhood helped me with their "Happy happy, joy joy," line of butt-smacking exuberance. I listen to so much music, dear reader — that's been perhaps the best gift regarding this gig, getting to hear so many different artists in the span of a year, live and at home, over a thousand of them in 2022 alone. It's a good life, wonderful even, with a nod to Jimmy Stewart's George Bailey. But — I say this every year around the winter holidays, so bear with me, please — things aren't so great for everyone, and we don't live in a society that takes care of its people. If you have anything to spare, there's nothing quite like giving those resources, be they clothes, food or even money, to those who really need it. I drive around with extra coats in my truck in case I see someone who's cold. Every little bit helps and on the off chance that all we have is each other, it literally means the world. Happy holidays, Merry Christmas, welcome to winter.

Alex Kent is a young singer songwriter who is trying it out on the local circuit. His primary styles are blues, rock and Americana, and he performs both originals and covers. You can check him out this evening at 7 p.m. at the Speakeasy, where there is no cover for the gig.

With the winter upon us and the holidays all around, tonight's gig at the Arcata Playhouse is the one big one of the week. Luckily, it's a real winner. At 8 p.m. you can join Canary and the Vamp, Humboldt's Tin Pan Alley treasures, as they play the greats from the early 20th century American songbook ($15). As I have noted previously, the band has only gotten better with the addition of Aleister Paige's pedal steel and strings, and the multi-instrumental evolution of front-lady Beverly Twist. That the group pulls it all off without a drummer isn't a liability, but an asset, allowing for more space and rhythm to be generated by Ryan Robert's guitar and John Ludington's excellent upright bass-manship. You don't want to miss this holiday treat.

If you are a live-music maniac and you really need to scratch that itch, the best I can suggest tonight is to head over to the Wave Lounge at the Blue Lake Casino tonight at 9 p.m. Especially if you are a deadhead, as an assembled troupe of local dead cover artistes are taking the stage to celebrate the music of the late Mr. Garcia. Rather than get visited by three moralizing ghosts tonight, may you find yourself surrounded by dancing skeletons instead (free).

If you take anything from the story of Jesus, I think that the central message is one of love and its incredible, transformative powers, as well as the terror it evokes in us. To love your neighbor is one thing, but to love your enemy, and the world at large, without reservation, remains an incredibly radical act more than 2,000 years after the nativity. I struggle with it daily and am often reminded (I'm paraphrasing here) of the author Evelyn Waugh explaining his utter shittiness in the face of his piety: "Can you imagine how much worse I'd be if I weren't a believer?"

Anyway, no matter what you believe, or who you are, have a blessed day and spread the love. You deserve it to flow through you, and radiate it to everyone around you. Unless you are Senator Ted Cruz, in which case I hope you get a brief vision of how truly loathsome you are.

Both my paternal grandparents were immigrants from the Maritime provinces in Canada, so I imagine that they had a much better handle on just whatever it is Boxing Day is supposed to represent. I celebrate by taking all of my garbage from Christmas, as well as whatever food scraps I can find, and animal waste in my yard, box it all up, and mail it to Sen. Ted Cruz. This is of course a parody, a joke that is completely fictitious and legally prohibited. Plus, I would hate my garbage to feed whatever demonic, tapeworm entity is inhabiting his skin so poorly.

If The Nightmare Before Christmas has taught us anything, it's that there is a not-insubstantial population in the goth community who loves the yuletide season. If you are among that group, consider going to the Siren's Song Tavern tonight, where at 8 p.m. you will find the post punk, goth group In Retrograde. Also on the bill is an act called Thundercloud, about whom I know very little beyond the name. As with most Siren's Song shows, the door price is not immediately apparent, so bring some coins for the bands.

As we are still in the torpor of the holidays, there isn't much music going on tonight. Although, if you feel like flexing your mind and pulling yourself out of said torpor, Savage Henry Comedy Club is hosting its Washington Square Wednesdays at 6 p.m., where you can play chess with other OG gamers and pretend that you are freezing your tuchus off in the titular Manhattan Park.

On a side note, I would like to wish my middle brother Ian, aka local rapper ruffIAN, a very happy birthday. I love you, champ, and being your smaller older brother has been one of the unwavering joys in my life. Keep doing your level best to compensate for my wickedness by being such a good guy.

Collin Yeo (he/him) really doesn't care much for this Ted Cruz fella. He lives in Arcata, almost out of stink range of the guy.