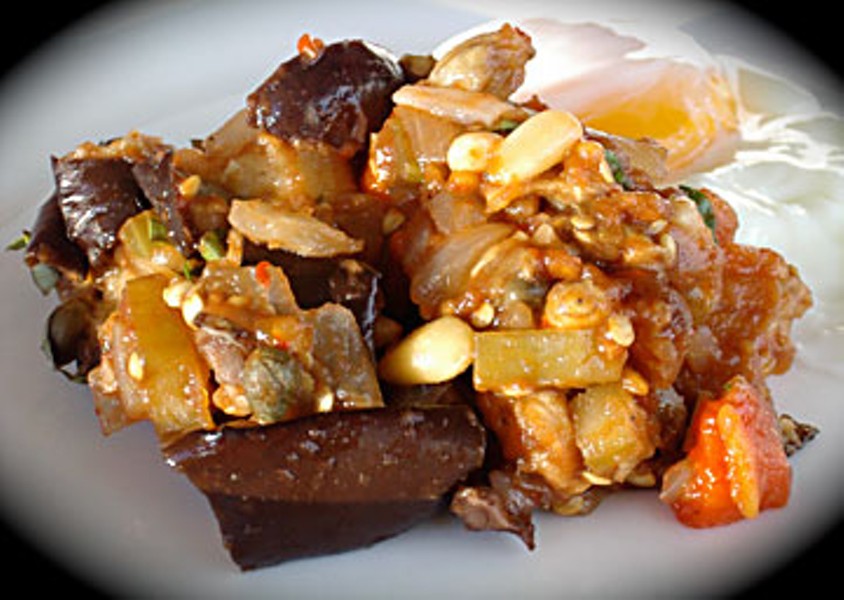 In the refrigerator Montalbano found a plate of cold pasta with tomatoes, basil, and black passuluna olives that gave off an aroma to wake the dead, and a second course of fresh anchovies with onions and vinegar. Montalbano was in the habit of trusting entirely in the simple but zestful culinary imagination of Adelina, the housekeeper who came once a day to see to his needs, a mother of two irremediably delinquent sons, one of whom was still in jail, put there by Montalbano. And this day, too, she did not disappoint him. Every time he was about to open the oven or fridge, he still felt the same trepidation he used to feel as a little boy when, on the second of November, he would look for the wicker basket in which the dead had left their gifts during the night -- a celebration now lost [...]

Surprise, in short, was an indispensable spice in Adelina's dishes.

He took his two courses, a bottle of wine, and some bread to the table, turned on the television, and sat down to dinner. He loved to eat alone, relishing every bite in silence.

Salvo Montalbano is police inspector in the fictional town of Vigàta, in Sicily. His creator is Italian author Andrea Camilleri. Born in Porto Empedocle (Sicily) in 1925, Camilleri published his first novel in 1978. In 1994, the first mystery of the Montalbano series was published. The Inspector's adventures -- told so far in 14 novels (nine of them available in English) and four collections of short stories -- have had a remarkable success in Italy and abroad. The TV movies based upon them are also popular.

Camilleri's stories are a tribute to Sicily, its people, language, landscape and food. Montalbano is not a cook but is passionate about good food. He drinks only coffee for breakfast (made by himself at home using the traditional stovetop coffee pot), then takes his time to eat lunch and dinner. Readers know what Montalbano gets at the restaurant (like the Trattoria San Calogero) and what his housekeeper Adelina leaves in the oven or in the fridge for him to eat when he goes back to his beach-front home, as in the introductory scene above. Montalbano has deep respect and affection for good cooks and celebrates them in the best possible way: by eating everything they prepare with appreciation and gratitude.

Supper was light, yet cooked, in every regard, with a touch the Lord grants only very rarely to the Chosen. But Montalbano did not thank the commissioner's wife: he merely looked at her with the eyes of a stray dog awarded a caress.

Dealing with crime and criminals takes a toll on Montalbano. He needs space for his mental processes to run their course towards the solution of the mystery at hand. Concentrating on the food on his plate and in his mouth is a way for him to clear his mind and to reconnect with a deeper, cleaner human essence.

The soft vegetables, which consisted of the leaves and flowers of Sicilian zucchini -- the long, smooth kind, which are white, lightly speckled with green -- had come out so tender, so delicate, that Montalbano actually felt deeply moved. With each bite he could feel his stomach purifying itself, turning clean and shiny ...

As a reader of the original text, I savor the language used by Camilleri, an Italian infused with local dialect, a blend that cannot be carried over adequately into another language. The translation into English of the Montalbano novels is the work of American poet Stephen Sartarelli. He does a fine job with The Terra-Cotta Dog, the one translation I have read. Here and there, he leaves the original words, as in the exclamation "Madunnuzza biniditta!" (blessed little Madonna). End notes clarify references to bits of the Italian past and present, including the political situation. As an aside, if you read The Terra-Cotta Dog you will want to know that mostaccioli in Italy are traditional cookies, not a pasta shape.

The Montalbano mysteries are not novels with recipes, but they are sprinkled with references to traditional dishes. Some of them have local currency, while others are famous outside Sicily. To the first group belongs pappanozza, a dish made with "potatoes and onions boiled for a long time, mashed into a porridge with the back of a fork, then dressed with an abundance of olive oil, strong vinegar, freshly-ground black pepper and salt" (Excursion to Tindari). To the second group belong (just to name a couple) pasta alla Norma, with ricotta salata and fried slices of eggplant (the name celebrates the opera by Sicilian composer Vincenzo Bellini), and caponata, a dish that "features cubed eggplants, celery and onions -- fried separately in a generous amount of olive oil -- flavored with tomatoes, raisins, pine nuts, olives, a sprinkling of vinegar and a touch of sugar for a characteristically sweet-and-sour flavor" (from La Cucina Italiana online glossary).

Back in the house, he opened the refrigerator. Adelina must have come down with an acute form of vegetarianism. Caponata and a sublime pasticcio of artichokes and spinach. He set the table on the veranda and wolfed down the caponata as the pasticcio was heating up. Then he reveled in the pasticcio.

I know I am not the only reader who has reacted to passages like the one above with a three-point action plan: 1) look for a recipe of the tempting dish, 2) purchase the ingredients and 3) get to work in the kitchen. The last step involves some creativity, so, for example, my version of caponata is a lighter interpretation of the traditional dish, with the eggplants baked instead of fried. As another aside, a book of recipes inspired by the Montalbano stories was recently published in Italy: I have not yet seen it, but it is on my reading wish list.

If the morsels offered in the preceding paragraphs have made you hungry for more, I would suggest that you start your meal from the beginning, by reading The Shape of Water. The Terra-Cotta Dog is the second serving in the series, and one of my favorites. In it, Montalbano, while dealing with a modern crime, discovers a 50-year-old one, a mystery that he can't let go until he solves it -- in quite a creative way. Go on, have a taste. If you like the fare, you'll have plenty to read -- and, if you wish, to cook.