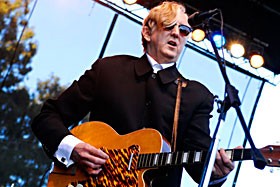 For the past six years investment banker Warren Hellman has bankrolled an impressive free music festival in San Francisco’s Golden Gate Park. Held the first weekend in October, Hardly Strictly Bluegrass features a multi-generational array of roots-oriented acts, from traditional bluegrass to country-inflected punk, and this year was no exception.

The weekend started with a Friday afternoon concert, where guest stars would appear. I arrived just in time for a solo acoustic set from Wilco leader Jeff Tweedy. Tweedy reached deep into his catalog, performing tunes from his old band Uncle Tupelo, his side project Loose Fur and stripped-down versions of Wilco tunes. Tweedy is the only rock star I know who could cheekily admonish a crowd about proper sentence construction, in this case bemoaning the overuse of the phrase “I loves me some...” He easily kept the teeming crowd rapt with just a guitar, and obviously was having a good time.

Saturday we got to the park in time to catch the Knitters, which is basically punk band X in country/folk mode. It’s always great to hear the way Exene and John Doe’s voices blend, especially on funny tunes like their kiss-off to SoCal beach culture, “Skin Deep Town.” They were followed by John Prine, whose wry Vietnam-era song “You’re Flag Decal Won’t Get You Into Heaven Anymore” unfortunately seems to be back in style.

Because of the oppressive crowds I gave both Gillian Welch and Steve Earle a miss. Instead, I checked out Los Lobos, who these days seem to be auditioning to be the new Grateful Dead. (They did two Dead tunes in their set, and favored a similar chugging boogie for much of it.) John Doe sat in with the band for a great cover of Merle Haggard’s “Silver Wings,” though, and he was joined by Dave Alvin and Joe Ely trading verses on an apocalyptic version of “Highway 61 Revisited.”

Sunday was thankfully much less crowded, and the Sadies were a great way to get the sunny day going. A Canadian band led by the Good brothers, Dallas and Travis, The Sadies can play many styles — garage rock, country, psychedelia and Byrdsian pop are all in their musical arsenal. They’re also well known as a backup band for other artists, so it was little surprise that alt-country powerhouse Neko Case showed up to join them on a spirited version of The Band’s “Evangeline.”

After a set by the Heartless Bastards, who recalled a country-tinged PJ Harvey, grizzled lefty punk veterans The Mekons took the stage. The eight members of the band gathered in a seated circle (even punk rockers get old and tired) and played a mix of brand new tunes and oldies — Sally Timms’ spooky vocals on “Ghosts of American Astonauts” were a highlight, as was her ironic dedication of “I Love a Millionaire” to festival founder Hellman. Part of the charm of a Mekons show is their jokey abusive banter, and they didn’t disappoint in that regard either. As the Blue Angels soared over the crowd, lyrics about “jet fighters rehearsing for Armageddon” seemed all too relevant, and Jon Langford joked they showed up two songs too early. Langford even got up out of his chair to attempt some drunken Tom Jones-style pelvic thrusts and Riverdance jigs, goading the early afternoon crowd. The Mekons pull off thoughful tunes and crowd pleasers, no easy feat.

Exhausted, we left Golden Gate Park early, tired but happy. The festival was fun, but this year its almost at the point where it’s a victim of it’s own popularity. Too many people can sometimes spoil the fun.