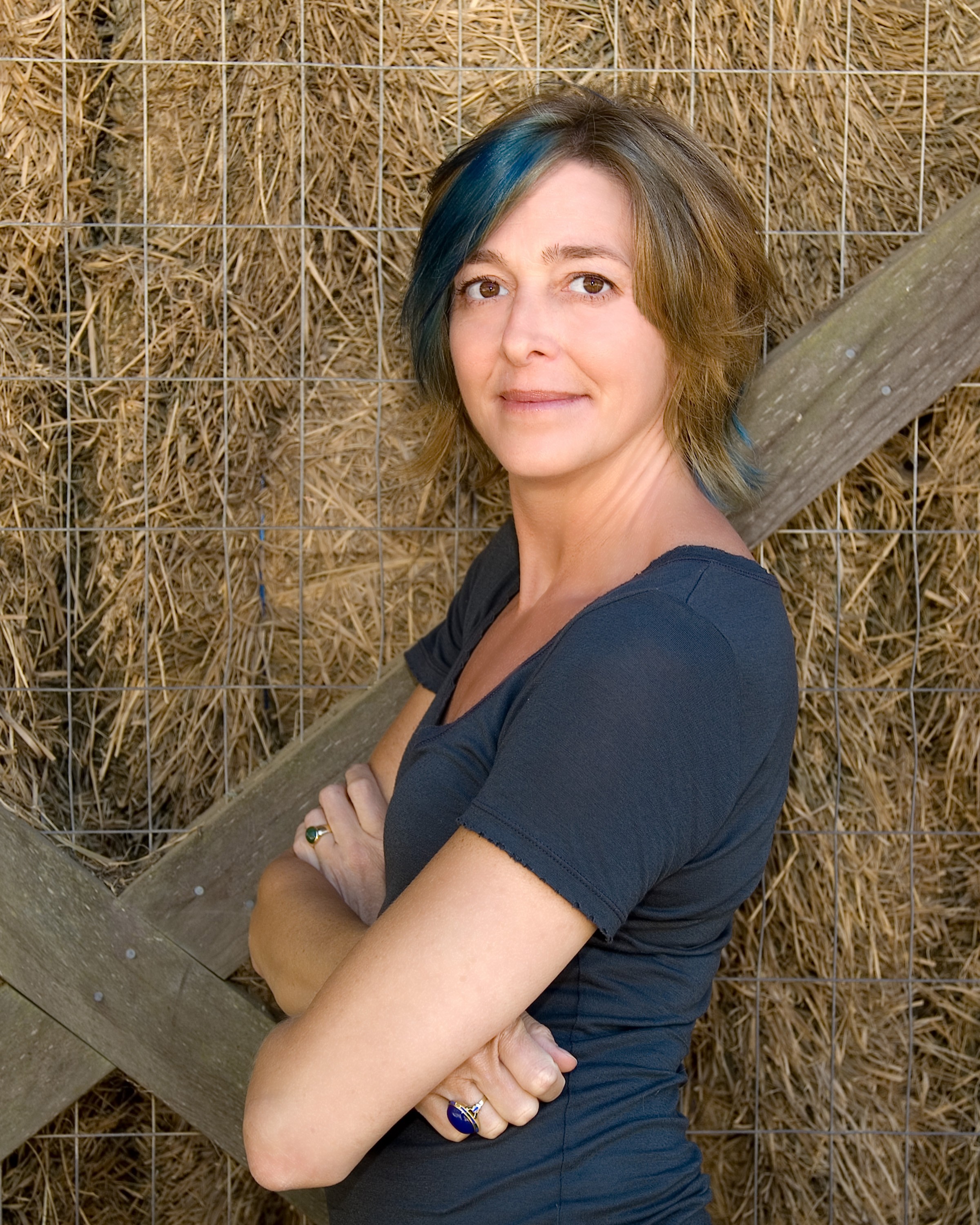 This weekend in SF's Golden Gate Park, it's the 11th annual Hardly Strictly Bluegrass a phenomenal event with dozens of stellar acts on half a dozen stages. Some are strictly bluegrass (Ralph Stanley and Earl Scruggs for example), others hardly (e.g. Mekons and Thurston Moore). Amazingly, the whole thing is free, courtesy of an eccentric venture capitalist. The main trouble is the plethora of choices. Ending the day Saturday on various stages are Irma Thomas, Steve Earle, Robert Earl Keen, The Flatlanders, Buckethead, and perhaps less familiar, Nell Robinson and Jim Nunally with their "All-Star Band," basically John Reischman and The Jaybirds,

It's a pretty big weekend for Nell: Friday she celebrates the release of her new CD, On the Brooklyn Road, with a show at the Freight and Salvage; Sunday, post-HSB, she heads north for a show at the Arcata Playhouse. She called Monday evening after spending the day rehearsing with Jim in a Bay Area studio. The Jaybirds would land Wednesday, and more practicing was planned. After talk about the upcoming shows, I started to ask a question about her past, but we got sidetracked with a convoluted tale involving her lost dog. It became clear that Nell is a born storyteller, although she denies it. And she's ready made for folk songs -- although she hasn't been a singer for long. And her name wasn't always Nell Robinson.

Around five years ago, approaching 50, she decided to take up singing and found a vocal teacher. She also decided to adopt her grandmother's name and with it, basically a new persona. Up until then she was Hillary Perkins, political activist -- "my former life," as she put it. She'd played flute in school bands when she was younger, but gave up music in college. "I became a grassroots organizer; I was out there doing pickets, going door-to-door and all that. ... The United Farmworkers had this kind of cadre of elite organizers trained by Cesar Chavez and Saul Alinsky; right out of college I got to work with those guys on campaigns and issues and I learned a lot. It was an amazing experience. Back then I was really focused on changing external forces, things like U.S. policy in Central America or supporting education funding. What I'm doing now with music is a different kind of activism, working on changing internal forces. Music touches people -- it's a really powerful force. The shows take people places."

On her record she takes the listener back home with voices of her uncles and her mom, interspersing reminiscences with songs that dovetail, either period pieces or her own songs. Why these stories now? "One reason is, my family is full of good storytellers; they keep history alive that way. I'm not as good as most of them, but with my music I've found a way to be a storyteller. And it's a way to reconnect with the place I came from. That just seemed important at this time in my life."

You'll hear some of those stories when Nell Robinson and company take the stage of the Arcata Playhouse Sunday evening. Be prepared for a dusty ride.

Another band playing Hardly Strictly, Hot Buttered Rum, stops on the way to SF for a Friday show at Blue Lake Casino, part of the Unwind Your Mind series. Formerly known as a "high altitude bluegrass" band, the quintet has added a drummer and is moving further from "strictly" towards jamgrass. Unwind winds to a close next Friday with Michael Franti and Spearhead. While that show was once declared "sold out," BLC put 1,000 more tickets on sale this week.

The Portland-band-o-the-week is Ghostwriter, aka Steve Schecter, a one-man band in the junkyard folk/punk/blues vein, wailing on guitar while stomping the beat on a homemade rig and growling out vocals. He'll do an instore at Missing Link in Arcata Saturday at 5 (all ages, free), then play later that night at the Alibi, sharing the bill with The Smashed Glass.

Thursday at Humboldt Brews BrownChicken BrownCow StringBand plays music from the hills of West Virginia with friends The Bucky Walters, who come from these here parts.

Bad Kitty presents the Coney Island Cockabilly Roadshow Thursday at the Red Fox. The bawdy burlesque review from NYC features foot-stomping music by Everymen and Filthy Still, scantily clad dancing girls, sideshow action by Viola LaLa Mia and Chelsea NoPants, plus E-Bomb's Touring Temple of Wow, whatever that might be.

Big weekend for comedy fans: Thursday Humboldt's Random Acts of Comedy folks do the improv thing at the Arcata Theatre Lounge, while up on campus in The Depot the 37th Annual San Francisco Comedy Competition helps choose the next generation of stellar stand-ups. Among the judges: Cliff from KHUM, host of the Friday Morning Funnies comedy hour, Andrew G from the photocomic Seven-O-Heaven, and yours truly, a funny lookin' dude with no comedy credentials (rimshot). Then Friday in Redway, the monthly Mateel Comedy Cabaret brings in established comics Rick Pulido and Willie Mac.

Or spend Saturday night at HumBrews with a pair of local rock combos (with soul): Children of the Sun and Small Axe.

Humboldt Metal Fest hits the Fortuna Veterans Hall Saturday with an all ages show starting at 2 p.m. with nine heavy bands. The polar opposite might be the Humboldt Folklife Barn Dance that night at the Arcata Veterans Hall with Striped Pig Stringband and caller Tara Stetz, back from Alaska. Or maybe the HSU Homecoming Day show (same night) at Fulkerson Recital Hall with HSU's Symphonic Band playing tunes such as Percy Grainger's "Ye Banks and Braes O' Bonny Doon" and the Jazz Orchestra riffing on Mingus' "Goodbye Pork Pie Hat."

Looking for some hip hop? People Productions brings mixtape master Chip tha Ripper to the Red Fox on Friday. That's the same night as the Bonus show at Jambalaya with Opio from Heiroglyphics, Z-Man and Equipto. (Kind of sounds like a superhero team.)

And on the electro front, World Famous presents Star Slinger from Manchester, UK, with New Yorkers Mux Mool and Shigeto, all at Jambalaya next Tuesday.

Rebirth Brass Band was born (or reborn) on the streets of New Orleans. That should be enough to get you down to HumBrews next Tuesday, but when you add in a healthy dose of heavy funk, well, you just have to hear it to understand. Be there. Feel it.

Mad River Brewery's Pints for Nonprofits that Tuesday has The Country Pretenders raising funds for the Breast Health Project. Also at Mad River, this Thursday, Pretender Fred Neighbor and his friend Junior playing swingin' jazz tunes as Fred and Junior.

The tribute biz has become a running topic here in the Hum. (Saturday we have Full Moon Fever TP-ing Bear River.) If your band is thinking of jumping on the tribute bandwagon, now's the time. Start with The Point's Classic Cover Contest Tournament. Submit your covers by Oct. 14. Details at kwpt.com.

The Facebook chat window popped up. Devon from Placebo was on the other end with details on a show "coming up this Sunday, Oct. 2, at the Eureka Veterans Hall with The World Inferno Friendship Society and The Phenomenauts, and locals Gunsafe. Doors at 7, show at 8 and it's all ages." What kind of music? Ska maybe? (Devon's in a ska band.) "No, The Phenomenauts are rockabilly from the Bay Area and The World Inferno Friendship Society is an anarchopunk jazz orchestra from Brooklyn, NY."

So, does this mean Placebo is back?