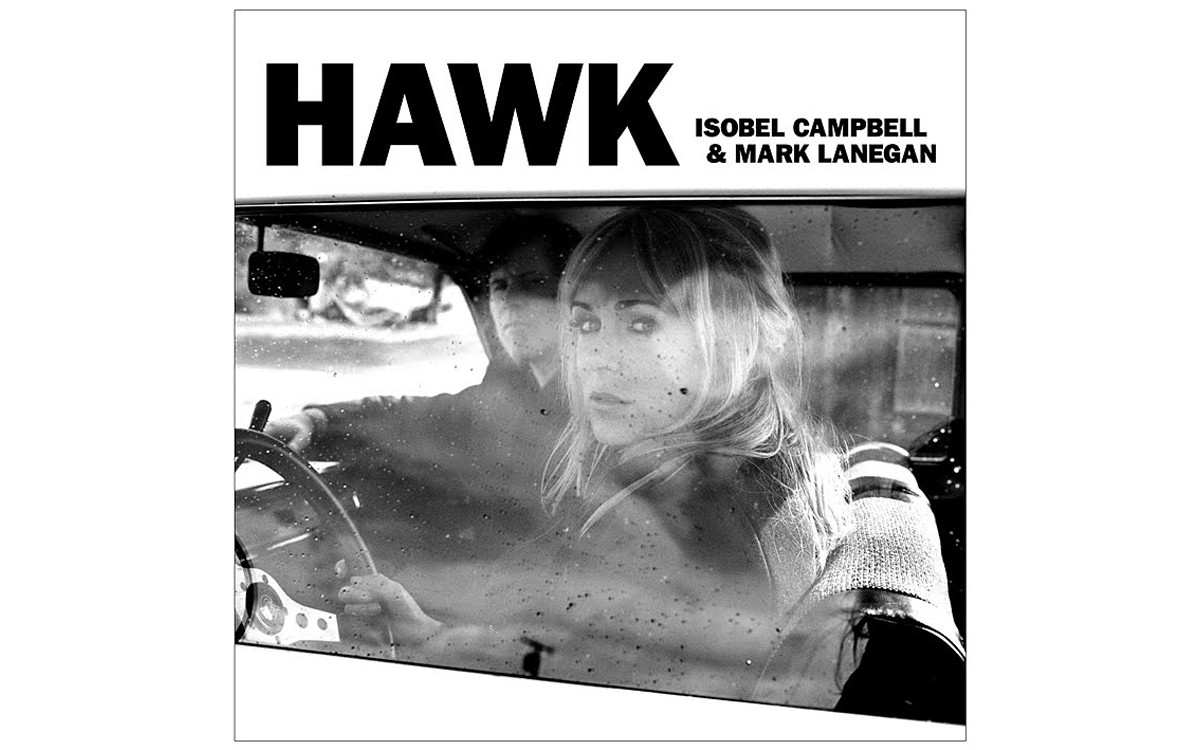 Since Isobel Campbell, vocalist/instrumentalist and founding member of Glasgow-based Belle & Sebastian, left that band in 2002, she has become best known for honing a duet persona in collaboration with former Screaming Trees and Queens of The Stone Age vocalist Mark Lanegan. After a number of solo efforts, including the notable Amorino in 2003, Campbell hit paydirt with her initial collaboration with Lanegan, who provides low, gravelly, whiskey-soaked counterpoint to Campbell's wispy, ethereal delivery, resulting in the excellent Ballad of Broken Seas in 2006 and their 2008 follow-up, Sunday at Devil Dirt.  For their third collaborative release, Hawk, the duo has reached a surprising new level.

"When we're in the studio [Mark] always turns around to me and says, ‘I trust you to do all the heavy lifting,'" said Campbell on her label's website. And though it's Campbell's direction, arrangements, song choices and production ("the heavy lifting"), Lanegan's contribution is significant. His voice is iconic and classic, leaning toward Johnny Cash with a natural, instinctive delivery that rides the rails between singing and talking. This "crooner" aspect of the prolific Lanegan is no secret. He has delivered tragic sea shanties, cracked blues and broken pop/folk songs throughout his solo career, dating from 1990's The Winding Sheet.

Affinity with the ’60s duo Lee Hazelwood and Nancy Sinatra has been evident from the duo's inception, and Hawk contains several nods to Hazelwood/Sinatra, especially in "Time of the Season" (not The Zombies song). The "Bang, Bang (I Shot My Baby Down)" homage in "Sunrise" features Campbell's lone spectral vocal.

But those comparisons end there. From the opening cut "We Die and See Beauty Again," a delicate, deathly ballad cut from Nick Cave's cloth, to the powerfully dense pulse of "You Won't Let Me Down Again," to the smoky sway of "Come Undone," they explore a wide swath of musical styles. Campbell has also aided in tempering Lanegan's execution, most evident in the album-closer "Lately," an early ’80s Dylan-influenced, country, rock and gospel number that in the hands of a less savvy vocalist might fall into some bizarre cliché. However, Lanegan provides the anchor.

Apart from the misplaced inclusion of Massachusetts-based singer Willy Mason on several songs, including a respectable version of Townes Van Zandt's "No Place to Fall," Campbell has successfully captured an atmosphere of two voices -- Lanegan's and her own -- engaged in an intimate dance. With the contributions of longtime collaborator Jim McCulloch from The Soup Dragons and former Smashing Pumpkins guitarist, James Iha, Hawk is clearly Campbell's strongest and most satisfying work to date. Most importantly, Campbell and Lanegan have earned a place amongst pop music's top shelf of sexy and cool singing duos, alongside the aforementioned Hazelwood/Sinatra and Serge Gainsbourg/Jane Birkin. Their added company couldn't be more welcome in an already classy joint.