Hazardous to Your Health 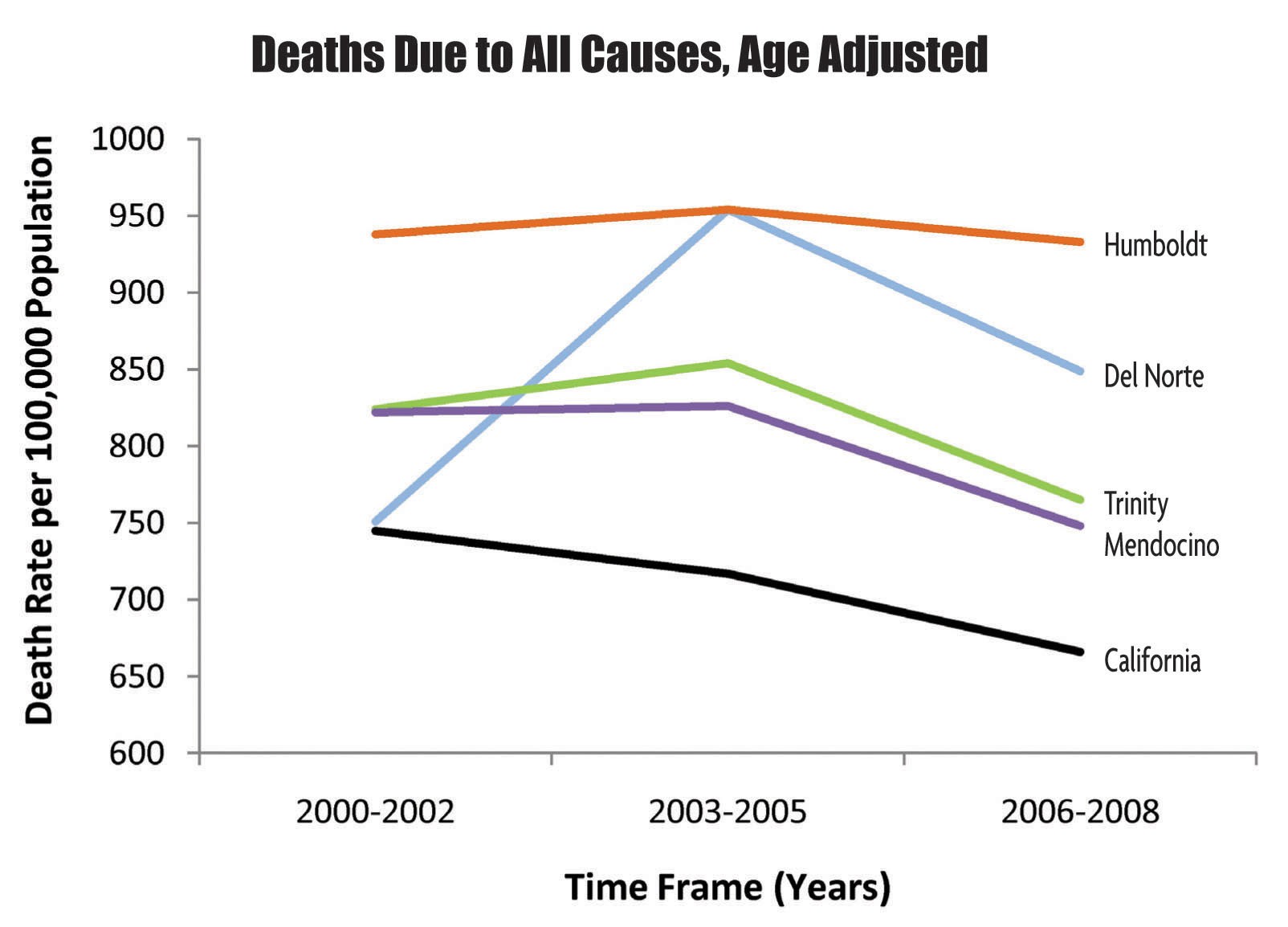 If you're looking to stay alive, Humboldt County is currently the worst possible place in the state to call home. Don't let the pastoral beauty and laissez-faire lifestyles fool you. Statistically, you're more likely to die here than if you lived in any other California county. That includes Alameda County, which has the highest murder rate, Tulare County, which has the state's most dangerous city (Visalia), even Los Angeles County. (And Snoop Dogg thinks he's so hard).

Surprising, right? Yet true. Here's evidence: Each year, the California Department of Public Health collects health and mortality data from the state's 58 counties, then compiles that data into a report called County Health Status Profiles. This report quantifies the manner and frequency with which Californians kick the bucket, adjusts the data for age differences and then breaks it all down by county. Among the many stat sheets generated in the annual report is a comprehensive list of each county's rate of death due to all causes, be they natural (heart attacks, cancer, strokes) or not (murder, suicide, car wrecks). After a decade of hovering near the bottom, in the 2010 report Humboldt County found itself (pardon the pun) dead last.

Here's what that means: From 2006 through 2008, one of every 103 Humboldt County residents bought the proverbial farm. Compare this to bucolic Mono County, which only bade farewell to one in every 370 citizens. (Statewide the rate was one per 161.) Hoping to provide a more nuanced picture, the California Center for Rural Policy -- a nonprofit research center located at Humboldt State University -- recently released its own report called Rural Community Vital Signs, which is exactly what it sounds like: a set of indicators that can be used to assess the region's overall health. (The region, for CCRP's purposes, includes Del Norte, Humboldt, Trinity and Mendocino counties.)

Why are so many of us croaking? That's a simple question with no simple answers, according to Dr. Jessica Van Arsdale, CCRP's director of health research. But treatment, she said, begins with diagnosis. "I started thinking about the community as my patient," said Van Arsdale, who also works at St. Joseph Hospital's Urgent Care Center. There, she explained, the first step is always checking a patient's vital signs -- heart rate, blood pressure, temperature. Reasoning that the same principle should apply on a macro level, CCRP assembled a working group that consisted of health care professionals, educators and policymakers. Together they developed a list of 48 health indicators ranging from how many of us have diabetes to how often we get our teeth cleaned; from how many parents read to their kids to how many families are living in poverty.

If the report can be considered our first annual checkup, then we're in bad shape. Going back to death rates for a moment, not only are we worst in the state for all causes, but among counties with reliable data we also have the highest rate of deaths due to drug overdoses, unintentional injuries, Alzheimer's, strokes and female breast cancer. And we're nearly the worst for deaths from suicide, chronic lower respiratory disease and all cancers. (Remember, this data factors in age differences, so we can't simply blame it on old people -- though Humboldt County's elderly population is growing proportionately larger.)

Taking a few steps back from death's door, the report reveals numerous other causes for concern. For example, 60 percent of Humboldt County adults are overweight or obese, and less than half of us exercise as much as we should. One in every four kindergarteners and first graders have untreated dental decay. Among households with children, almost 14 percent of families live with very low food security, meaning they don't get enough to eat and/or don't eat regularly. These families -- the children in particular -- are far more vulnerable to health problems.

Back to the question of why things are so bad. Partly it's related to our physical environment. Rural communities consistently have trouble recruiting and retaining physicians, particularly specialists and dentists, Van Arsdale said. Plus, many local residents don't receive regular health screenings. "If you don't get screened then you aren't going to detect [a health problem] until you're developing symptoms, and often it's too late by then," she said. Another factor: Because our population is spread out, we spend more time driving and less exercising. "And being in a rural community, we've got winding roads; people typically drive faster and engage in riskier behaviors like not wearing seat belts," Van Arsdale said.

Humboldt County Public Health Branch Director Susan Buckley said the key to improving these ugly statistics lies in examining the big picture. "What we're trying to do is move upstream [to identify] causative factors and start addressing them there," Buckley said. For example, county health staff is examining community access to grocery stores that carry healthy fruits and vegetables. (As a group, we actually do better than the state average in this department.) They're also working with the Redwood Community Action Agency to develop safe routes to public schools so kids can walk, bike or skate there. And they have programs designed to help low-income moms adapt to their difficult new role.

The CCRP report points out that a community is like a human body in that it's "a complex organism which relies on numerous intricate systems to work in concert." Clearly, something's out of whack in Humboldt County. But Buckley sees the glass as half full. "For me, as a public health advocate, there's enormous opportunity here," she said. Of course, from the bottom there's nowhere to go but up. Buckley is hopeful that the recent health care reform legislation will allow locals to seek more preventative care, though she cautioned that it will take a while for current prescriptions to show results. "Generations of behaviors have caused this picture," she said, "and there will be generations of work to get to an improved picture."

You can find the find the County Health Status Profiles Report on the California Department of Public Health website, www.cdph.ca.gov. The Rural Community Vital Signs report is available at www.humboldt.edu/ccrp/.