Fly the W, Benjamin Funke's new work at College of the Redwoods 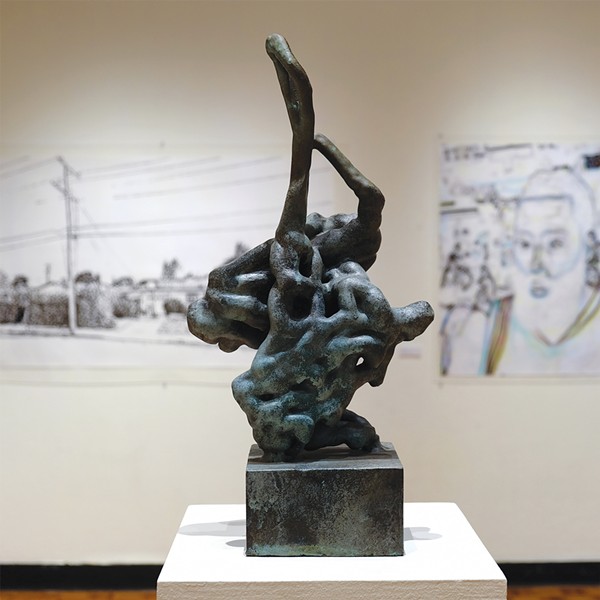 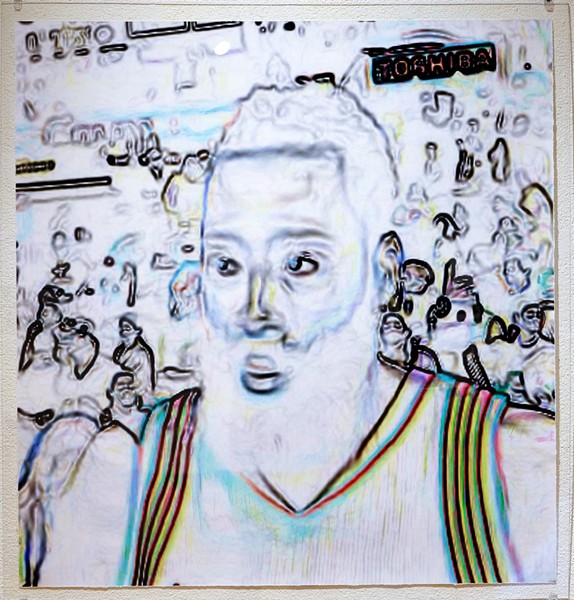 Courtesy of the artist "Collection," a display of sports trading cards from Benjamin Funke's Fly the W show.

For serious sports fans and weekend warriors, what happens on the field has far-reaching significance. The games we play and watch can become an organizing force in our lives. Sports divides and unites. Love of a game can be passed through generations. Sports can even become the sole topic of discussion between people with no other means of connection. You'd think such a consequential societal aspect would be ideal art fodder — and it is. But it's tricky.

Because sport comes pre-loaded with so much sensory and emotional content, as well as all that kinetic energy, making art about it can feel redundant. It's hard to add anything of creative or emotional value. As a result, much in the way art dealing with sex can easily slip into the realm of pornography, sports art often veers into "fan-art" or fails to do much more than reproduce the tension, elation and disappointment that already exist in the games. Of course, there are exceptions. Enter Benjamin Funke, an art faculty member at both College of the Redwoods and Humboldt State University, and his exhibition of new and recent sculptures and drawings, Fly the W, on display at College of the Redwoods Creative Arts Gallery.

It makes perfect sense that Funke would create an exhibition conceptually centered on basketball. Growing up in the Midwest, pickup games at ubiquitous neighborhood hoops were a seminal part of his youth. Part of the inspiration for this show actually came from another basketball-related project. "The whole process started when I was an undergrad at Columbia College in Chicago," Funke explained. In what he described as a "concept-heavy" arts program, Funke was encouraged to consider how a concept could stretch across multiple images and mediums, acting as a unifying force. "I started photographing basketball hoops around the country: Chicago, Iowa, Hawaii, California — you find them everywhere! It became my conceptual link," Funke said. He began to see the hoop as a societal constant, crossing cultural and socio-economic lines in our diverse American landscape. "It was telling me about place."

Funke noted that while the geometry of hoops and backboards is repeated, "the stage is always different." The photo-journaling project yielded images that were interesting and personally significant for Funke, but it didn't feel complete.

"Simply displaying the photographs wasn't going to be enough," he said. "They needed to have another transformation for it to become interesting."

The transformation Funke was searching for came in the form of omission and obfuscation. Using the original, standard format color photographs as reference, Funke undertook dismantling the images, breaking them down into essential components. The resulting sumi ink on paper, black and white drawings (some over 6 feet tall) are striking. With the new scale, absence of color and much detail removed (hoops and backboards remain), viewers experience the drawings differently than the original photographs.

"There are a lot of blanks — things that you'd have privilege to if you had it photographically represented, in these drawings you don't get that at all," Funke said. "It allows the viewer to fill in the blanks."

Even the nonspecific titles (e.g. "alley," "downtown," "park") leave room for the viewer to personalize the places depicted. Some strokes have a gestural feel, almost mimicking text. In sections where many of these marks are grouped, there is the sense that something is being camouflaged — that words are about to emerge from the seemingly random marks and impart some hidden meaning.

Funke has also included two color drawings in the show that are stylistically divergent. "They traverse a lot of different processes," he explained, but ultimately they are digital-to-analog transformations. Initially, Funke searches YouTube videos for historically or socially significant sports moments that catch his eye and then he extracts a selected frame. Using digital processing software, he dramatically alters the image, eliminating elements of detail and contrast. The manipulated picture is then printed. Finally, Funke uses watercolor and colored pencil to add or augment color and line. Both drawings depict NBA stars (one former, one current) almost as they would appear on sports trading cards, but their faces feel like apparitions.

The atmospheric quality is very different from the stark contrast in the black and white drawings.

"There are definitely similarities conceptually but formally they're as far apart as you can get," Funke said. "I really enjoy that aspect, kind of confusing the viewer, blurring the lines of process."

Funke's campaign of obfuscation carries into the show's sculptural work. Considering esoteric sports language ("post up," "screen," "tip-off") helped Funke connect the sculptures conceptually to the drawings and guided some installation decisions. "I tried to dissect the language of the game to make formal decisions about the sculptural work," Funke said. Even the show's title, Fly the W, is a phrase used to denote victory by Chicago Cubs fans. While there are recognizable forms (e.g. nets, hoops) used in some of these sculptures, there are also large, linear, post-like pieces that don't immediately offer a formal link to the game. It is in these sculptures that the power of the conceptual connection Funke so carefully maintains is most perceptible. The exhibition's two large central sculptures tower above the viewer. Placed in proximity, these pieces, although abstract, begin to feel figurative when considered in conjunction with the drawings and other more representational sculptures. By the time I left the gallery, those sculptures had become two players poised at center court, waiting for the opening tip-off.

Funke's sculptures offer another level of obfuscation as well. Many surfaces have similar looks and textures owing to an epoxy clay topcoat. The same surface, depending on form, can feel organic or inorganic — something from a coral reef or the back of an auto shop. But this surface similarity belies the fact that what lies beneath is often very different: Bronze, copper, foam, PVC, steel and wood, alone or in combinations, end up looking similar after Funke's treatment. Because of this, viewers' assumptions about materials and even weight relevant to size are often incorrect.

The show's two wall-mounted sculptures follow a different set of rules. These long, bookended "collections" of sports cards are displayed as if the edge of each card were a book spine. The face (image) and back (stats) of each card are completely hidden from view. The visual and statistical information of each card is reduced to the "one-millimeter zip of color" that runs along the cards' edges. The visual effect is something akin to a subtly colored barcode that leaves viewers to consider questions of athlete/sport as commodity but also society's connection to sports stars and the assumptions we make about the players we watch. We often feel that we know these athletes despite the fact that what we truly know about them amounts to little more than that one-millimeter strip of color. We fill in the blanks with assumption.

Funke will be giving a gallery talk at College of the Redwoods on March 24 at 11 a.m.

Jason Marak (he/him) is a freelance writer and artist in Humboldt.