Hear Some Music, Make Your Own 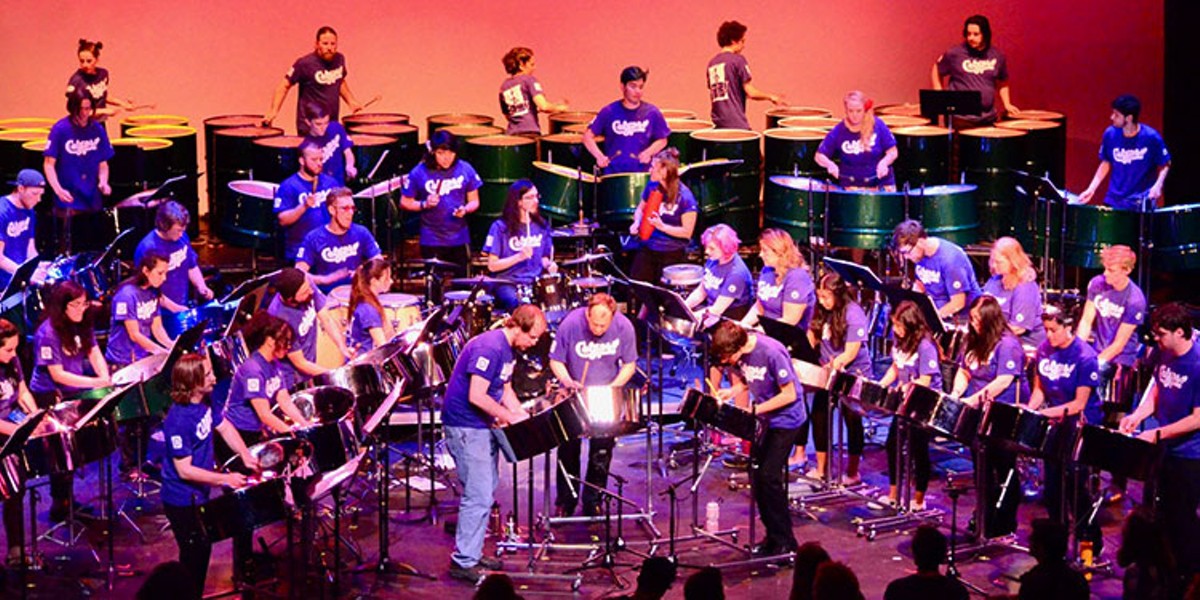 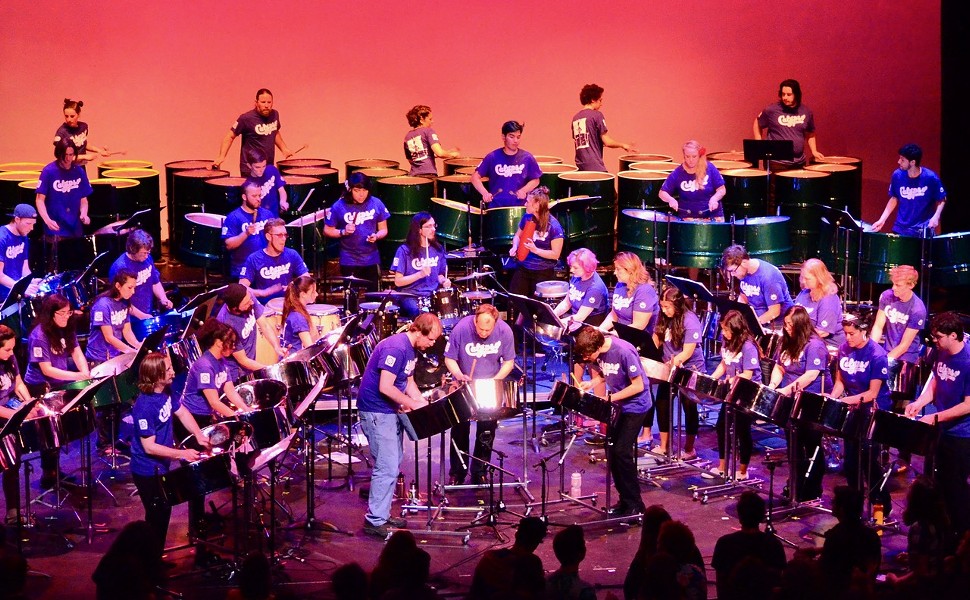 For most of us, last week was likely less stuffed with music and more stuffed with other temptations. A few legendary artists came through town but the streets were fairly empty over the holiday. This week is enjoying a trickling in of musical acts as the students and civilians likewise return to our county. So in deference to the heavier live music bill of goods this week, and the between-holidays desire to shed and atone, I am going to keep this introduction short and unsweetened: Go see some shows and enjoy yourselves before we are all blindsided by that quasi-pagan sugarplum light-fest leering around the corners of our days like Krampus with a credit card bludgeon. Get down while the gettin's good.

This is a great night for punk rock and all the musical satellite genres which orbit punk rock's eternal flame like weirdly mutated moths in an endless mosh pit circle. At 8 p.m. at Siren's Song, Oakland hardcore group Cronander headlines the night, with local openers Dead Drift, Arcata's queer punk group SLOP and Clam Hammer ($5). Meanwhile, at the Miniplex, the melodic and loud punk rock bards of Olympia, Washington, Naomi Punk, hold court at 8:45 p.m., supported by a cast of motley players unique to Humboldt County stages: the magical minstrel Mister Moonbeam and the elect knights errant of heavy tunes, those staid and true bailiffs of buzz and bass, Blackplate ($10/$8 advance). Come one, come all, huzzah and hosanna.

The Eureka Symphony and Eureka Symphony Orchestra present their Winter Dreams Concert at the Arkley Center. Led by conductor and local treasure Carol Jacobson, this concert will feature a holiday-themed repertoire including parts of Handel's advent-ubiquitous Messiah and a sing-along of Christmas carols. This sort of thing is pretty magical this time of year, especially to the kiddies, so it's a real blessing that children 12 and under enjoy free admission to this two-night event. For us adults it's a sliding scale of $19-$49 but well worth the price for skillfully executed holiday cheer.

Talented local singer-songwriter and guitarist Georgia Ruth celebrates the release of her debut CD Life Worth Living! with members of local master act Absynth Quartet at M. Walker Guitars, the South G Street shop of luthier Michael Walker. Tickets are available online at the Absynth Quartet's website for $20, or you can try your luck and show up for the kick-off at 8 p.m.

Past and future art-funk group Peach Purple team up with neo-jazz and hip-hop quintet The Fatherlies for a bouncing night of joyful noise at Humbrews at 9:30 p.m. ($5). Come shake out your cares and troubles with two of the best local groups to curate a groovy exorcism at one of the best venues for such as well.

The Humboldt State University Calypso Band will be performing with the university's Percussion Ensemble at the Van Duzer tonight at 8 p.m. ($10). Expect an evening of modern modal pieces peppered with Latin rhythms and a new arrangement of a Tito Puente tune.

Local fantastic roots-rock trio Kingfoot brings its bluesy and deadly danceable set to the Logger Bar starting at 9 p.m. (free). I always enjoy Kingfoot shows and the crowd it brings to the Logger is full of the very definition of bonhomie.

Also at 9 p.m. but 20 miles down the road, Diggin' Dirt will stomp out a post-Art's Alive! set at Siren's Song for the true Eureka musical cognoscenti to dance to after the riff-raff have cleared the streets with the promise of an early bed (price TBA).

Today you could spend your entire afternoon into the evening in the northeastern corner of Arcata and still be treated to three great and unique musical events.

The HSU Wind Ensemble and the Scotia Band take the stage at Fulkerson Hall at 2 p.m. for a concert of airborne tunes and piped ditties ($8/$5 children/free for students).

Near campus but with wine and beer (and coffee and food), Blondies is hosting its Sunday evening Jazz Jam (5 p.m.) where local jazz-bos are encouraged to show up with preferred instrument in hand to play with hosts Don Baraka on saxophone and Val Leone holding down the six strings a la Grant Green or Wes Montgomery (free).

Back in Fulkerson Hall at 8 p.m. and for the same price structure as the Wind Ensemble's concert, you can hear a different kind of musical air manipulation as the Madrigal and Mad River Transit Singers treat you to the sweet and uplifting sounds of vocal polyphony first devised in that original Summer of Love, the European Renaissance ($8/$5 children/students free). Monday

If you are like myself and our fellow plebs who did not score tickets to the sold out Bill Murray and cellist Jan Vogler and friends event at the Arkley Center at 7 p.m., you can lick any wounds you may have incurred as a have-not by boning up on your own skills and trying out for one of these local public musical groups. If you stick with it, you might even get to one day perform at the aforementioned venue — who knows? As a slightly amended version of the old saying goes: How do you get to the Arkley Center? Practice.

The Humboldt Ukelele Group welcomes strummers and pluckers of all skills to its first Monday of every month meeting at the Arcata Community Center to work with like-minded four string fanciers toward a common goal at 5:30 p.m. ($3)

Rise up singing with the McKinleyville Community Choir, which practices at 6:30 p.m. at the Grace Good Shepherd Church. There is a $50 registration fee but you can ask about sponsorship and deferment and start working on those scales.

Hello, hello, hellooooo. Hello my barbershop enthuuu-siasts, hello my a cappella friends, friends, friends. Grab your suspenders and straw hats and head to the First Congregational United Church of Christ in Eureka at 7 p.m. for the weekly gathering of the Humboldt Harmonaires, a group dedicated to the performance and preservation of four-part vocal harmony men's barbershop songs. All ages and voices allowed, previous experience not required (free).

Or, if you want a bass heavier set, The Whomp at the Jam has an eclectic line up at tonight with Biolumigen, Jason Burruss and Mexico City's Medular (price TBA).

Full show listings in the Journal's Music and More grid, the Calendar and online. Bands and promoters, send your gig info, preferably with a high-res photo or two, to music@northcoastjournal.com. As a child, Collin Yeo thought the word "madrigal" was pronounced "magical." As an adult, he believes that they are not only near-homonyms but synonyms. He lives in Arcata, which has a similar relationship in his mind to the phrase "Et in Arcadia ego."