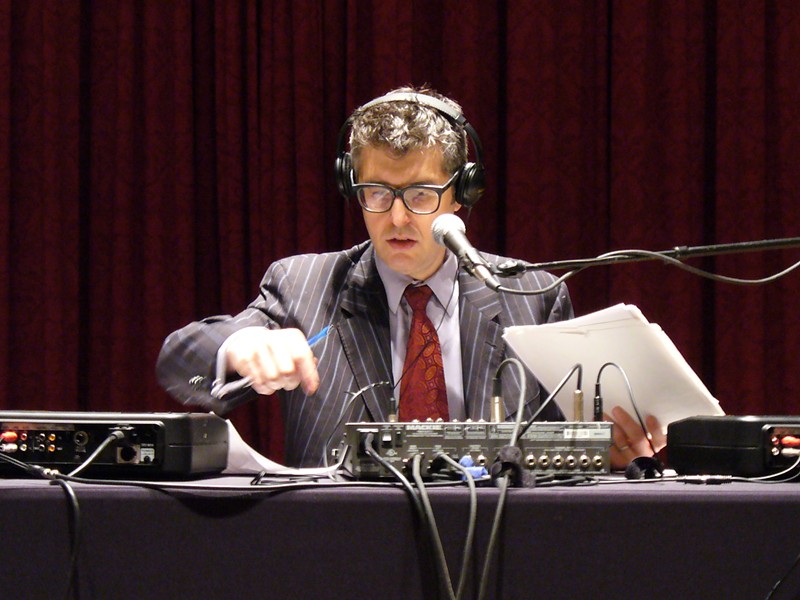 A routine part of pitching on the KHSU pledge drive is thanking new and returning members for their donations. During the fall drive I was handed a pledge form to thank someone. "TAL" was written in the box indicating favorite shows. I had to admit I had no idea what that meant, but soon learned it's an acronym for This American Life, the very popular radio show started 15 years ago by Ira Glass.

It also turned out one of the premiums for donors came from TAL. "They're very creative about their thank you gifts," said David Reed, KHSU's development director. "They made up these three-gig thumb drives in the shape of the This American Life logo and loaded them with 35 favorite episodes along with a copy of a live streamed cinecast they did two years ago."

Reed figures TAL is the second most popular show on KHSU, right after NPR's Morning Edition. "Beyond the numbers, Ira Glass and This American Life have changed the way radio is done, at least public radio," said Reed. "They don't produce radio the way it was done before 1995. It's not a news program and it's not a comedy show, it's a whole different animal. It relies on storytelling and just talking to people."

Reed is right in that there was nothing like TAL 15 years ago -- in a way, the show more closely resembles programming from radio's pre-TV golden era, the ’30s and ’40s. It's not like most modern radio: designed for background listening or for people with short attention spans driving in cars. You are fully engaged for an hour the way you are when you read a compelling magazine article or watch a must-see show on television.

Reed sees TAL as akin to a gateway drug. "I think it's made people wake up to what can be done on public radio that's not being done elsewhere in the media. People get hooked and get a taste for other innovative programming. Some ended up subscribing to the podcast."

Over 1.8 million listeners hear Glass and company each week on one of 500 plus public radio stations. TAL is often the No. 1 or 2 most downloaded podcast thing on iTunes in the U.S. Of course, the show and Glass have won numerous awards. A television version lasted for a couple of years on Showtime and won a few Emmys, but was abandoned -- it just wasn't the same.

As Reed noted, Glass has a big heart -- he's generous with his assistance to public radio in general. "There's a creativity that goes into the thank you gifts and stuff he'll do for your station. He's always willing to record special things for your particular station."

He also travels from TAL homebase in Chicago on a regular basis doing personal appearances like the one this weekend at Humboldt State. In some cases the whole TAL organization hits the road and broadcasts live, but mostly it's a one-man show: Glass sits in front of a broadcasting console and talks about how the show is done -- and about storytelling, with examples. Like the show it's absolutely compelling.

CenterArts presents an evening with Ira Glass on Saturday, Nov. 6, at 8 p.m. in HSU's Van Duzer Theatre. Tickets are $55, $35 for HSU students, and are available by calling 826-3928 or online at humboldt.edu/centerarts.