Little Women the Musical and The Cricket on the Hearth

by David Jervis and Pat Bitton 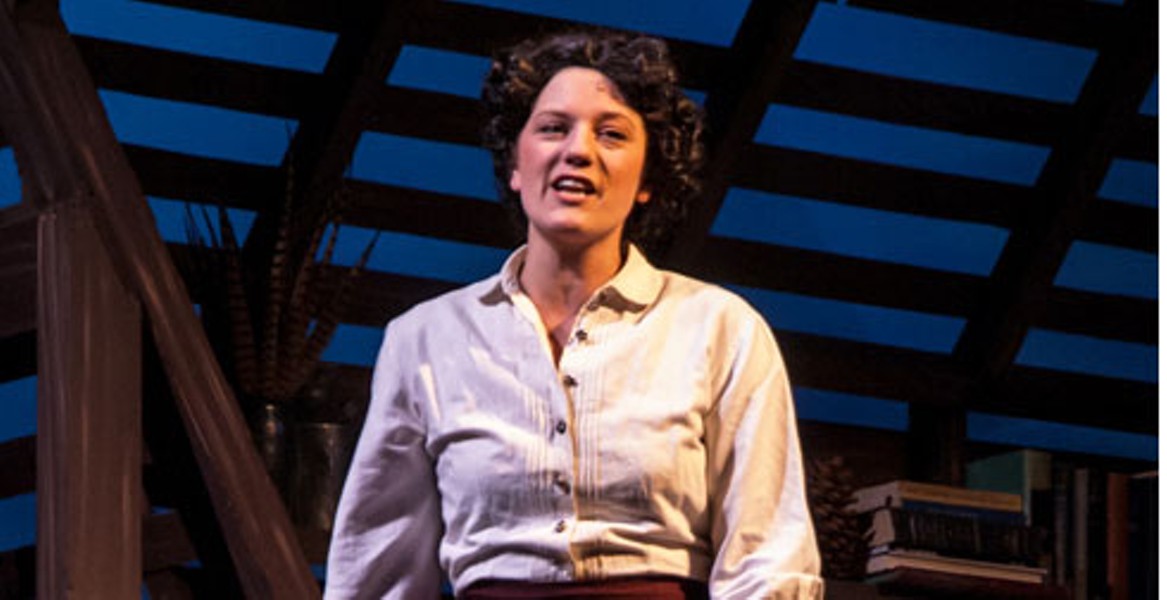 Louisa May Alcott's iconic 1860s-era novel Little Women may seem an unlikely choice for a musical, but one person's impossible task is another's irresistible challenge. Much in the vein of the admonition that one chooses to go to the moon not because it is easy, but because it is hard, Alcott's oft-adapted künstlerroman found its way to the Broadway stage in 2005, and this month Ferndale Rep ambitiously has another go at a story familiar to millions.

The tale of the four March sisters — Jo, Meg, Beth and Amy — in Massachusetts in the years during and following the Civil War, is one that has a scrappy, all-American grace in its clearly autobiographical basis. Additionally, in the way it views the challenges and progress of its characters, it stood out in its time and has lasted through to this day with what was then called a particularly "modern" view of its female protagonists.

Jo March (portrayed serendipitously by Jo Kuzelka), is the stand-in for Alcott herself, one of the two sisters who work to support their mother (Tina Toomata). Kuzelka has an outstanding voice, one that shines in some of the show's more memorable numbers — the first act closer "Astonishing," as well as "The Fire Within Me" — and she is ably helped by her supporting cast. As a story on the page or on the stage, Little Women has a lot of moving parts and character development aplenty, and all on hand are worthy to the task.

But here's the rub: So much of what worked famously in Alcott's prose can come across as rushed and perfunctory when put through the motions of even an above-average musical. What in fact does work in the play's favor are scenes that employ the machinations of musical theater, such as the vivid, dreamily imaginative number that starts the second act, "The Weekly Volcano Express," or how well the fate of Beth (a notably good Jessi Shieman) is handled both musically and visually.

The set design by Raymond Gutierrez is remarkable, and Lydia Foreman and Kate Newby's fine period costumes rise to the occasion for all two-plus hours. All told, Little Women's power as an enduring 19th century American tale, along with the good work onstage and backstage at FRT, at times manages to withstand the other historical force that works against it: The notion of "say, imagine this, only as a musical ..."

Little Women the Musical plays at Ferndale Repertory Theatre through Dec. 20 with Friday and Saturday shows at 8 p.m. and Saturday and Sunday matinees at 2 p.m. Call 786-5483 or visit www.ferndalerep.org.

The Cricket on the Hearth was the third of five Christmas stories published by Charles Dickens in the 1840s (A Christmas Carol was the first). By all accounts, it was popular, with 17 stage productions in 1845 alone, but has since been eclipsed by its predecessor. So we're fortunate Half Dollar Holler chose to bring it back to life, co-adapted with original music by Carlene and Anthony Cogliati and now playing at Redwood Curtain Theatre.

Where A Christmas Carol channels Dickens' passion for social justice, Cricket is much more of a feel-good Christmas story. John Peerybingle (Daniel Kennedy), a carrier for local manufacturer Mr. Tackleton (Ellsworth Pence), gives a hooded stranger (Joey Lawrence) a ride to the village where he lives with his wife Mary (Amanda Wood) and baby daughter, played stoically by a plastic replica — a good choice considering the clumsiness of the Peerybingles' maid, Tilly Slowboy (Denise Ryles). Meanwhile, Mary's long-lost friend May Fielding (Elizabeth Holverson) and her mother (Gloria Montgomery) return to the village from London for a surprise wedding and to catch up with their other old friends, Caleb Plumber (Bob Beideman) a toymaker for Mr. Tackleton, and his blind daughter (Kendyll Rogers).

Mr. Tackleton has agreed to keep Mrs. Fielding out of debtors' prison in exchange for her hand in marriage, in order to produce an heir to take over his business. But his attention turns to May, who is still carrying a torch for her long-lost (and presumed dead) fiancé Edward, son of toymaker Caleb. Many misunderstandings and unburdenings of conscience ensue, but a wedding still takes place — just not the one anyone expected — and everyone lives happily ever after.

The characters of the cricket, guardian of constancy and love, and the other household spirits Dickens envisioned overseeing the human participants in the tale get rather lost in this ambitious production, to the extent that their appearances are more confusing than enlightening. However, they do provide a useful chorus-like role as the play's musicians, and are cleverly incorporated into the set via a mezzanine level constructed above the stage.

While not a Redwood Curtain Theatre production, several of the performers have been seen on other North Coast stages. Most turn in solid acting and singing, but the English accents are clearly a problem for some, ranging over many regions; performances improve significantly for those who instead revert to their normal speaking voices. The set and lighting are well designed and effective.

All-in-all, The Cricket on the Hearth delivers two hours of holiday cheer that will have you, like several of my fellow attendees, humming Christmas songs as you leave.

Redwood Curtain Theatre hosts Cricket on the Hearth now through Dec. 13 with 8 p.m. shows on Friday, Saturday and Sunday. Call 443-7688 or visit www.redwoodcurtain.com.

You can still enjoy a fresh/old-timey take on a classic with the entertaining and sharply timed It's a Wonderful Life Live Radio Play at North Coast Repertory Theatre through Dec. 12, with Thursday, Friday and Saturday shows at 8 p.m. and a Sunday matinee on Dec. 6. See www.ncrt.net or call 442-6278.

More holiday fun takes the stage at the Arcata Playhouse with The Bigfoot Lodge Holiday Radio Hour through Dec. 12, with 8 p.m. performances on Fridays and Saturdays, and a 2 p.m. show on Dec. 12. The variety show features guest bands, choirs and puppets to keep you laughing. Visit www.arcataplayhouse.org or call 822-1575.

Humboldt State University's all-female cast takes on roles of men and women in the backstage send-up Anton in Show Business through Dec. 13 at the Gist Hall Theatre. Shows start at 7:30 p.m. on Thursday, Friday and Saturday with a 2 p.m. matinee on Dec. 13. Visit HSUStage.blogspot.com or call 826-3928.