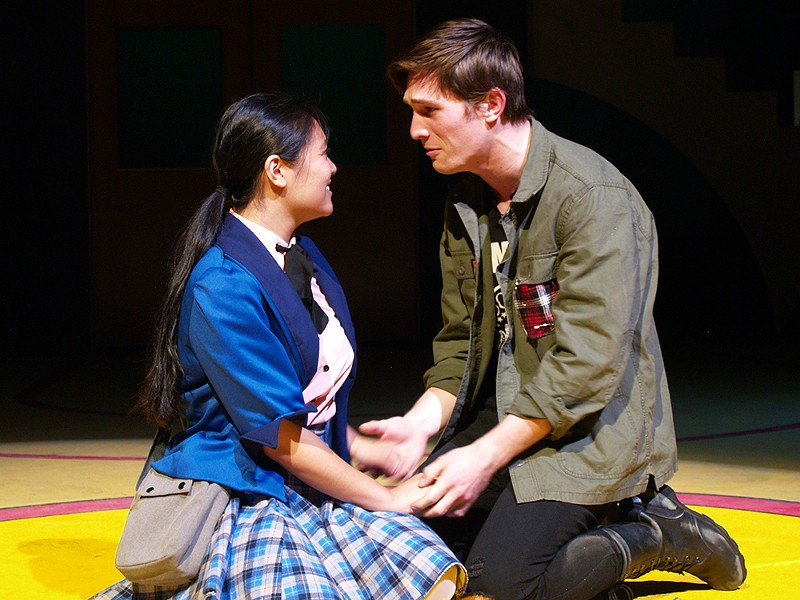 Courtesy of HSU Department of Theatre, Film and Dance Gwynnevere Cristobal as Veronica and William English as J.D.

The 1980s are a decade remembered as a little more feckless, joyous and callow than they in fact were. In line with that recollection is a whole era of teen movies. Some were fun; many are unwatchable now. But in 1989, as the decade churned to a close, there was the movie Heathers, from the pen of young screenwriter Daniel Waters, which sort of slammed the door on the ditzier shades of the genre.

Heathers is a brilliant but very dark comedy, and seemed even more so then, barging head-on into the subjects of teen suicide, murder and even mass killings. It was pretty much impossible for a studio to market in that era and it bombed. Still, it outlived so many things on the screen that year to become a cult phenomenon and cultural touchstone. That in 2010 a musical version made its way from off-Broadway to London's West End is not a big surprise, and now Heathers: The Musical lands as a great 2019-2020 season opener for Humboldt State University's theater department.

It's 1989 at Westerburg High School in Sherwood, Ohio. Veronica Sawyer (Gwynnevere Cristobal) is, at first, the rather detached chronicler of all the school's social strata, which includes three noxious popular girls all by the first name of Heather, the sort who sit wherever they want to at lunch, and who exercise fickle and diabolical control over those they consider beneath them. That's everyone, essentially.

A not-really-accidental meeting gets Veronica into the Heathers' orbit, and the extent of the trio's control, or at least what they see in their own minds, gets belted out in the number "Candy Store." Cristobal has a stunning voice, as does Kiara Hudlin (Last seen in Ferndale Repertory Theatre's Smokey Joe's Cafe), who plays Heather Chandler, the alpha and the most conniving of the three.

Veronica has a fashion makeover and is invited to a popular kid-mobbed homecoming party, but also has the menace of her newfound "friends" forcing her to be an accessory to a cruel prank against her childhood friend Martha (Katie Lem). Fortunately, amid all this she meets, and is aswoon with, new-at-school, scruffy, sexy and poetry-quoting J.D. (William English III), who wins his way into her heart in a brawl with Westerberg's laughably horrid pair of loudest jocks, Kurt and Ram (Garrett Vallejo and Henry Crome). From there things naturally find their way into the great heart of darkness that is high school and, ultimately, some sense of redemption.

We're treated to Veronica's onstage diary entries, which include some of the most iconic lines from the original film ("My teenage angst now has a body count"), as she and J.D. are thrust into a maelström that, at first, validates the axiom that hell is other people. But amid the apparent suicides of their worst foes, it's clear there are some pretty dark places within themselves.

To say any more would be unfair both to people unfamiliar with the original movie and those who know it by heart. Heathers: The Musical muscles its way into being a hefty work on its own merits and Director Rae Robinson handles it more than adeptly. The first act rolls along with great momentum, while the second act is weighted down a bit with a couple of musical numbers that have considerably less zip, as well as the absence of some of the most obnoxious characters. Although, in fairness, some of the characters who've died live on as ghosts appearing periodically in the play, a great choice. The show's winning number, without a doubt, takes the movie's memorable "I love my dead gay son" scene and rockets it into a 2019 consciousness. The dueting conservative-but-woke dads are spot-on ("They were not dirty/ They were not fruits/ They were just two stray laces in the Lord's big boots") and it's a great burst of energy for the whole play.

Lem and English have great pipes on them as well, and all of the cast were able to generally overcome some spotty but persistent sound problems on opening night. Fine work was done by in the very busy set changes and overall design from Jayson Mohatt and company, and from costumer Tzveta Stoimenova for nailing, oh, such an era (so many colored tights). That Heathers feels so timeless in its story rather than a period relic might seem troubling, but it's quite the opposite. To quote one of the Heathers, it's "very."

The Humboldt State University Department of Theatre, Film and Dance's production of Heathers: The Musical plays at the Van Duzer Theatre on Fridays and Saturdays at 7:30 p.m. through Nov. 2, with a Sunday matinee at 2 p.m. on Nov. 3. For more information, call 826-3928 or visit www.humboldt.edu/theatre.

Redwood Curtain Theatre takes us down the emotional Rabbit Hole Oct. 31-Nov. 23, when it stages the Pulitzer Prize-winning drama about a marriage haunted by tragedy. Visit www.redwoodcurtain.com or call 443-7688.