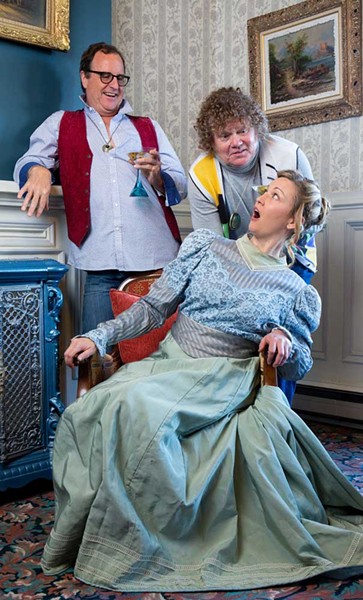 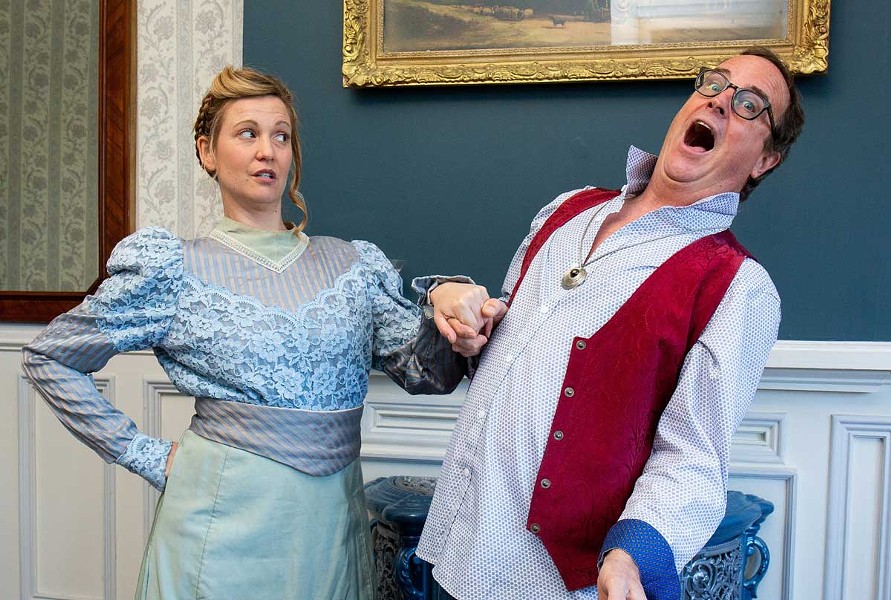 Photo by Evan Wish Photography, courtesy of Redwood Curtain Theater Kimberly Haile (left) and James Hitchcock excel with a script that is described as inventive, clever, ribald, crude and graceful.

The lights of the Redwood Curtain Theater go down and a woman's voice comes out of nowhere, "I hear what you are saying, Tesman. But how am I to get through the evenings out here?"

No, you aren't two hours late for Hedda Gabler, you're just in time for Jeff Whitty's The Further Adventures of Hedda Gabler, a satirical, dark-hearted romp through the metaphysical and fictitious.

At the risk of spoiling a 127-year-old play, Hedda Gabler ends with the titular character's suicide. The Further Adventures of Hedda Gabler begins with her waking up on the same couch that was her deathbed, blood and gray matter soaking a lovely throw blanket. She is confused and recalcitrant, as you would be if the last thing you remember was darkness and the crack of a pistol against your temple.

We come to learn that she's been here for years, stuck in a Sisyphean loop in which the rock is a bullet and the mountain is her head; a purgatory in which fictional characters are doomed to repeat their small lives for all eternity, or at least until they are forgotten and can truly perish. She is accompanied by her effete husband George Tesman (Tyler Egerer), a servant named Mammy (straight out of Gone with the Wind) and their neighbor, the infanticidal Madea (of Euripidean fame, played by Madison Glee), all of whom have grown tired of Hedda's particular brand of cruel melancholy and selfishness.

After an extended re-introduction (and some necessary exposition) to this fictive netherworld, Hedda resolves to reach "The Furnace of Creative Invention" and escape her ever-looping fate. Tesman attempts to dissuade her, as he cannot exist without her, as does Mammy (but only because she hates Hedda). Nevertheless, Hedda (played by Kimberly Haile) prevails, ordering Mammy (played by Michelle "Chelly" Purnell) to pack her some bags and lug them along. Mammy, bound by her character's composition, acquiesces under great protest.

It is fitting that Mammy lugs Hedda's bags because Mammy does put the show on her back to an extent. Nobody else was bad but Purnell plays Mammy with a nuance, ease and grace that is difficult to wring out of an antebellum stereotype. She's severe, cutting, reflective and hilarious — sometimes all in the same moment. And she's got a wonderful singing voice to boot.

Along the way, Hedda and Mammy encounter a host of fictional characters from the famous (Hamlet strides across stage grieving over his fallen Yorick) to the just-recognizable (a C.C.H. Pounder-style homicide detective who fields phone calls regarding Madea's murders). They even meet Jesus (well, a number of Jesuses) as well as Steven and Patrick, a pair of cliché lisping hypersexual 1960s queens — or "Friends of Dorothy" as they call themselves (among other epithets). Steven and Patrick (played exceptionally by Steven J. Carter and James Hitchcock, respectively) become traveling partners of Mammy's after she and Hedda separate, and offer comic relief so effective, on-the-nose and unyielding that it almost becomes tiresome. As the two are fond of saying, "They just don't make 'em like us anymore."

Constrained by the size of the Redwood Curtain Theater, set and light designer Ray Gutierrez did an excellent job making lemonade. His reconstruction of House Tesman is sparse and effective. These limitations are also deftly played for effect. At one point, Madea summons her chariot of winged scorpions and out comes a built-out kneeling scooter. Here, the cast also deserves a mention. Much of this play takes place in motion: walking through a Dark Forest, crossing a massive lake (either on Jesus' back or by boat), traversing an all-burning furnace. The primary set (Hedda and George's home) never changes but the cast gives a sense of place well enough that you don't ever wonder why there's abstract art and roman columns in a Dark Forest.

As I watched, I couldn't stop thinking about Rosencrantz and Guildenstern Are Dead by Tom Stoppard. Both spend a great deal of time dissecting the conflict between art and reality. In The Further Adventure, this comes to a head when Hedda, Mammy, Steven and Patrick reach the furnace. Each undertook this journey to change (mostly). Hedda wants to stop killing herself and to be happy for once, Mammy wants to stop serving white folks, Steven and Patrick want to fix Patrick's "'ess' problem." But once Hedda and Mammy change Hedda into a kind woman and Mammy into Shamari Robinson, a self-possessed jazz-singing, underground-railroad-founding titan of progressivism, they quickly begin to die. "No one wants to see you happy!" Patrick cries at Hedda. No, the audience wants characters to be miserable, conflicted wretches. He's not totally wrong.

James Whitty's script is generally inventive, clever, ribald, crude and graceful. It's also the best excuse to play stereotypes for humor I've ever seen. And yet, sometimes I couldn't help but feel the play would be better accompanied by a laugh track. He hits every note for all these caricatures, which is impressive. But it's also the problem. The script is so dense with humor there is almost no respite and the conversations that undercut and challenge these depictions are sometimes so brief and cursory and riddled with humor they border on glib. The one exception being Mammy, whose person was truly investigated, her change eliciting uproarious applause from the crowd. She is the Samwise Gamgee to Hedda's Frodo Baggins.

The Further Adventures of Hedda Gabler plays at the Redwood Curtain Theater through July 28. Thursday through Saturday at 8 p.m., with Sunday shows at 2 p.m.