Guts and glitter at NCRT 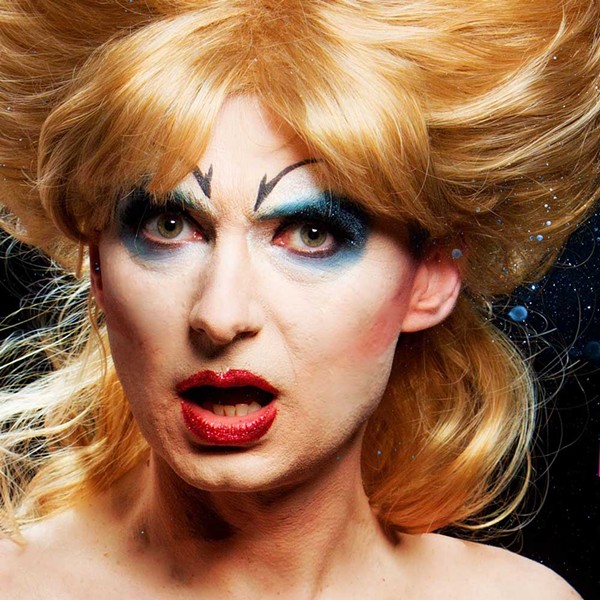 As a bridge between the rock, pop and soul music of the 1960s and the explosion of punk in the late 1970s, and the myriad subgenres that followed, there was glam rock. Bigger in its scope and impact in the UK, but by no means limited to across the pond, among its flashy and tuneful agents were David Bowie, T-Rex, Sweet and the New York Dolls.

And glam is the basis, the language and beating heart at the center of John Cameron Mitchell's Hedwig and the Angry Inch. Part play, part rock musical and part (sometimes interactive) one-person show, it's now on stage at the North Coast Repertory Theatre. With Morgan Cox as Hedwig and under the great direction of Rae Robison, the production is rollicking and exhilarating indeed.

John Cameron Mitchell conceived and then first staged Hedwig off-Broadway in the late 1990s and directed a film adaptation in 2001. The movie's small-scale box office was far exceeded by critical acclaim and its wild cult following, which helped refuel restaging, including on Broadway, in ensuing years. With a story that has some basis in Mitchell's own youth in Kansas. Hedwig, propelled by a musical genre from the '70s and using political and cultural touchstones from the late 1980s as well as current issues of gender equality, spans time in odd ways to feel timeless and relevant.

The play unfolds as a one-person (two-person, to be quite fair) spoken/sung autobiographical rock opera/revue with Hedwig telling her story from childhood in East Berlin in the 1970s and 1980s in an impoverished household with a very strict mother. Morgan Cox, backed by a great four-piece band, has deft command of the free-ranging detail of narrative that subsequently flows through meeting Luther, an American Army sergeant who arranges for Hedwig's departure, but only with the condition that he, then male, undergo surgery to transition to female in order to come to the West and marry him. The surgery is botched, leaving Hedwig, with a 1-inch scar ("the angry inch") rather than any genitalia at all. When Luther eventually leaves Hedwig single and jobless and alone in Junction City, Kansas, Hedwig's odyssey in love and growth truly begins, told in such raucous musical numbers as "Wicked Little Town" and "Hedwig's Lament " and in such great lyrics as "My sex-change operation got botched/My guardian angel fell asleep on the watch/Now all I got is a Barbie Doll-crotch/I've got an angry inch."

Hedwig is the sort of show, as the obscure showbiz expression goes, that makes its own gravy. It lends itself to being so freewheeling that it can go in all kinds of directions with improvisation on the part of Cox, including his banter with the audience, the four members of the band and his co-star Yitzhak (Jo Kuzelka), who plays Hedwig's drag queen husband from Croatia and who serves as a backup singer and near-constant stage presence throughout the show. Hedwig is filled with bits of improvisation spun off of recent headlines, all kinds of remarks on consent and gender identity (some of which date back to the original 1990s material and don't always as play as well two decades later) and great improvisation on the part of Cox talking to and wandering into the audience (even lending out a hat to someone in the front row the evening I attended).

Cox, most recently seen in Ferndale as Seymour in Little Shop of Horrors, as well as in NCRT's recent staging of Richard III and The Hollow, really blows the doors off the place. To be Hedwig requires combining being an emcee, a sort of cabaret master, a storyteller, a comedian, a very serious actor, a crazy, brash, fearless physical presence and above all someone who can convey with great humanity a story of agonizing, hilarious, harsh, pointed genderqueer character. And Kuzelka (Laurey in NCRT's Oklahoma and also recently seen in Pippin and Little Women) is amazing in a role that is bigger and more vital than it might seem. Her singing voice remains an absolute wonder and what she brings is vital to being an onstage compliment to Hedwig's full-time stage presence.

Mainstream American society seems at a precipice of understanding how we think about gender identity and all the tolerance, thought and love that comes with that. NCRT's production of Hedwig and the Angry Inch, by offering a look back at the 20-year span since John Cameron Mitchell conceived of it, rises to that task in the best way possible — by being smart, poignant and glam rock as all hell.

Updated editor's note: At Saturday night's performance, Cox was injured onstage, necessitating the early ending of the show and medical treatment. While doctors initially cleared Cox to resume performances Friday, May 18, that has been rescinded and the show will be postponed until Friday, May 25. An additional weekend has been added as well, and those with tickets to canceled shows can arrange to use them at a later date. Read more here.

Hedwig and the Angry Inch is now scheduled to play at the North Coast Repertory Theatre in Eureka on Fridays and Saturdays at 8 p.m. through June 16 and also Thursday, June 14, with Sunday matinees at 2 p.m. Call 442-NCRT or visit www.ncrt.net.

Crossing the Vortex: The 2018 Thesis Festival at Dell'Arte's Carlo Theatre plays May 17-20 and May 24-27 at 8 p.m., showcasing five original pieces by students.

Chicago brings criminal celebrity and fringe-shaking to the Ferndale Repertory Theatre Fridays and Saturdays at 8 p.m. through June 2, with Sunday matinees at 2 p.m. through June 3. Call 786-5483 or visit www.ferndalerep.com.

The lush and engaging The House that Will Not Stand plays at Redwood Curtain Theatre Thursday, Friday and Saturday nights at 8 p.m. through May 26, with Sunday matinees at 2 p.m. May 13 and 20. Call 443-7688 or visit www.redwoodcurtain.org.