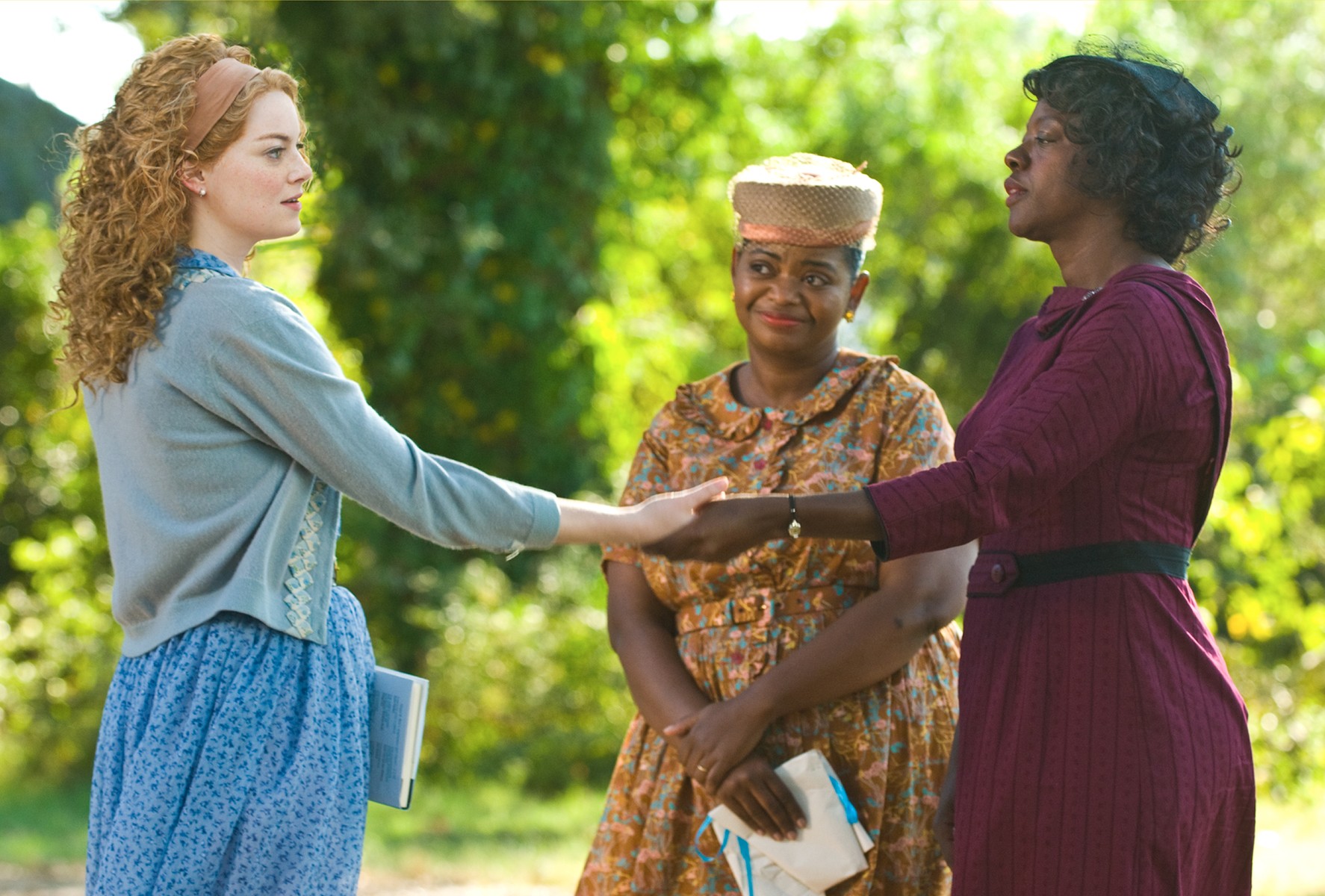 THE HELP. Unquestionably, I bring a lot of baggage to The Help. For one thing, it is based on Kathryn Stockett's 2009 debut novel of the same name that was mostly well-reviewed, became a best-seller, and is much beloved by many readers. In the latter category is a local friend who was very enthusiastic about the book and urged everyone she knew to read it as a picture of how things were in the South. Also, as a young graduate student at the University of Iowa, in 1961 I married a woman whose family lived outside of Lexington, Ky., and who had a black maid. As a city kid from Baltimore, that encounter left me with a general, superficial negative bias regarding what I experienced of Southern culture.

Given my strong reaction to the film (I never got to the novel), I called my friend and got her insights about the book. But the bottom line is that this is an opinion column where I try to report my reaction to films as accurately as possible, and I absolutely detested The Help. To be fair, I'm not sure Stockett intended her novel to represent "Southern culture," as it was inspired by the maid who raised her. Indeed, despite the title, this is a coming-of-age story centering on the primary protagonist, Skeeter (a deglamorized Emma Stone).

So this is how I perceive the story: A privileged white woman, an aspiring writer, graduates from Ole Miss and returns to Jackson to discover her privileged white friends and neighbors are racists. It was probably the building of separate bathrooms for their maids that sealed her insight. The maids are oppressed but noble. As an act of rebellion, Skeeter decides to write a book where the maids are given their own voice, incidentally helping her career at the same time. After a series of setbacks, the book is completed and published, Skeeter goes off to New York for a job with the publisher, and the maids are still in Jackson.

I can't fault the cast, which is fine overall. Stone is solid as Skeeter while Viola Davis manages to find some depth for the featured maid character Aibileen, and Bryce Dallas Howard is chilling as Hilly. But the acting couldn't overcome my antipathy toward the story that, rather than challenge my biases, simply fed them.

At the end of the film, Skeeter has a scene with Aibileen and Minny (Octavia Spencer), the most outspoken maid, where she tells them she is going to turn down the New York job because she can't desert them. It made me wonder if Skeeter actually learned anything. PG-13. 146m. At the Broadway and Mill Creek.

SNOW FLOWER AND THE SECRET FAN. Based on Lisa See's novel of the same name, Snow Flower and the Secret Fan is a semi-historical weepie that follows the complex relationship between two sets of women in 19th century rural China and in contemporary Shanghai.

After a somewhat chaotic set of opening scenes, Wayne Wang's (The Joy Luck Club; Because of Winn-Dixie) film settles into alternating between the stories of Nina (Bingbing Li) and Sophia (Gianna Jun) in modern Shanghai and Lily (Li) and Snow Flower (Jun) in the 19th century.

Lily and Snow Flower bond as children and both suffer through foot binding. Lily's feet turn out perfectly and she ultimately is married into a well-to-do family, but the lower class Snow Flower is less lucky in her life. Their bond is represented by a secret fan the friends share. In the present, Nina begins to investigate what ruined her relationship with Sophia following the latter's bicycle accident that puts her into a coma.

The delicate relationship between the two sets of female friends is handled with great sensitivity by Wang, and the cinematography (by Richard Wong) is beautifully effective. Some viewers may have trouble with the film's very slow pace and general "talkiness," but this viewer enjoyed the examination of female friendship and love. Nina's discovery in her father's locker at the end of the film becomes the physical and symbolic object that represents the eternal bond between these two sets of women. In terms of performance, Li's is a standout. Ignore the somewhat negative reviews and give this film a chance despite its sentimentality. PG-13. 105m. Ends Thursday Aug. 18 at the Minor.

FINAL DESTINATION 5. Until yesterday, I was uninitiated in the storied world of the Final Destination franchise. Grisly death for its own sake isn't the kind of thing I usually look for as the center of my movie-going experience. However, I was willing to check out this fifth (!) installment with as unbiased an eye as I could turn to it. Surprisingly, I actually sort of enjoyed it, although I was forced yet again to see a movie in 3D, despite my increasingly desperate, whiny lamentations.

I can't say FD5 has made me a 3D convert, but it at least played with the format, which highlighted its silliness. For example, the title sequence is comprised entirely of objects -- everything from fluorescent tubes to prosthetic limbs to a charred corpse -- hurled through plate glass at the viewer. So that was fun, but about as much perspective intrusion as I really need on any given afternoon. Brains and viscera coming at me by the bucketful I can do without.

That aside, the movie strikes me as generally unassailable if approached "for what it is." The filmmakers set out to make a movie about death as a vindictive force that won't rest until it's dispatched its victims in a series of increasingly contrived scenarios loaded with misdirection and shameless tension-building. In that, they succeeded, so unless "good taste" precludes it,  FD5 works as a cringe-inducing guilty pleasure. R. 92m. In 3D at the Broadway, 2D at the Mill Creek.

30 MINUTES OR LESS. Sadly, the movie for which I had higher hopes doesn't quite reach the bar it sets for itself. 30 Minutes is director Ruben Fleischer's follow-up to Zombieland (2009), which had enough winking jokes, sly surprises and chemistry to successfully mash-up the zombie and road-comedy genres. That movie, in other words, really worked.

Despite the rampant likeability of its stars, 30 Minutes never quite gets off the ground. it's funny without ever crossing over into really funny, primarily because the script doesn't play to the comic strengths of the actors. And it's pretty realistic without feeling totally real. Tone is the issue here: In an attempt to cross two genres, it comes up a little short on both counts.

That being said, I could watch Aziz Ansari, Danny McBride and Nick Swardson play these characters all day. Each has a distinct but undeniable screen presence that can get laughs almost effortlessly. Jesse Eisenberg I like, but he keeps getting cast in roles that I don't think force him to stretch much as an actor. (The Social Network, where his work was pretty incredible, is a notable exception.) Of the entire cast, Michael Peña is the standout. The balance of menace and silliness he strikes as Chango the hitman is hilarious.

Overall, 30 Minutes Or Less is fun and brisk and entertaining. It's probably my fault I was hoping for a little more. R. 83m. At the Broadway, Mill Creek and, for one more day, Fortuna.

TREE OF LIFE. Finally! Reclusive auteur Terrence Malick's (Days of Heaven, The Thin Red Line) cinematic tone poem, released elsewhere almost five months ago, comes to the Minor Theatre. The "story," as such, centers on a 1950s Midwestern family led by a domineering patriarch (Brad Pitt) and his impact on his eldest son (played as an adult by Sean Penn). But reviews, along with Malick's previous work, suggest that plot will be incidental to artistic vision. I'm so going. PG-13. 139m. At the Minor.

CONAN THE BARBARIAN. Yup, they remade the 1982 Schwarzenegger movie. Why, you ask? Well, this one's in 3D! And, uh, Ron Perlman's in it? OK, fine. We have no idea why. Actually it's probably because the target market (teenage boys) wasn't born when the original came out. Rated R. 112m. At the Broadway and Mill Creek.

FRIGHT NIGHT. See above, only replace "1982" with "1985" and "Schwarzenegger" with "vampire next door." Colin Farrell plays the suburban vamp who terrorizes a high school senior (Anton Yelchin) and his mom (Toni Collette). Rated R. 106m. In 3D at the Broadway and Fortuna, 2D at the Broadway and Mill Creek.

ONE DAY. Your date movie of the week stars Anne Hathaway and Jim Sturgess who meet on the day of their college graduation -- specifically, July 15, 1988 -- and begin a relationship that adorably undergoes key moments on subsequent July 15ths. Aww. Rated PG-13. 107m. At the Broadway.

SPY KIDS: ALL THE TIME IN THE WORLD. The fourth film in the family-friendly franchise goes 4D. Yes, four "dimensions," with the extra one being smell. Aroma-Scope, ladies and gentlemen. Is it the future of movies, or just a scratch-and-sniff gimmick? Ask John Waters.

The Arcata Theater Lounge's Sci-Fi Pint and Pizza Night is monster-heavy this week featuring the The Island of Dr. Moreau-esque film Terror is a Man (1959) and Night Fright (1967) about an unfortunate botched NASA experiment. On Friday, break the "what happens at Burning Man stays at Burning Man" rule and check out Burning Man: Beyond Black Rock (2006). Saturday it's the '80s nostalgia of The Goonies (1985), which is somehow also a benefit for breast cancer awareness -- I don't see the tie-in, but okay. Oh. Booby traps? Finally, on Sunday catch the stop-motion fantasy children's film Coraline (2009).

CAPTAIN AMERICA. WWII-era dweeb gets juiced into a super soldier, fights Nazis. PG-13. 124m. At the Broadway and Mill Creek.

CHANGE-UP. Best friends swap bodies. What could be funnier? Rated T. 112m. At the Broadway.

COWBOYS AND ALIENS. Daniel Craig and Harrison Ford star in this film set in 1873 Arizona Territory about ... well, you know. Rated PG-13. 118m. At the Broadway, Fortuna and Mill Creek.

CRAZY, STUPID, LOVE. Steve Carell portrays a fortysomething who tries to cope after his wife cheats on him. Rated PG-13. 118m. At the Broadway.

HARRY POTTER AND THE DEATHLY HALLOWS: PART 2. The boy-wizard becomes a man-wizard in the final installment. PG-13. At the Broadway.

RISE OF THE PLANET OF THE APES. This is when it all went bad for us humans. Thanks alot, James Franco. Rated PG-13. 110m. At the Broadway, the Minor, Fortuna and Mill Creek.

THE SMURFS. We couldn't get anyone on staff interested in reviewing this movie. But it's about Smurfs, if you're wondering. PG. 102m. At the Broadway.