Dell’Arte’s clown play about the gags of war 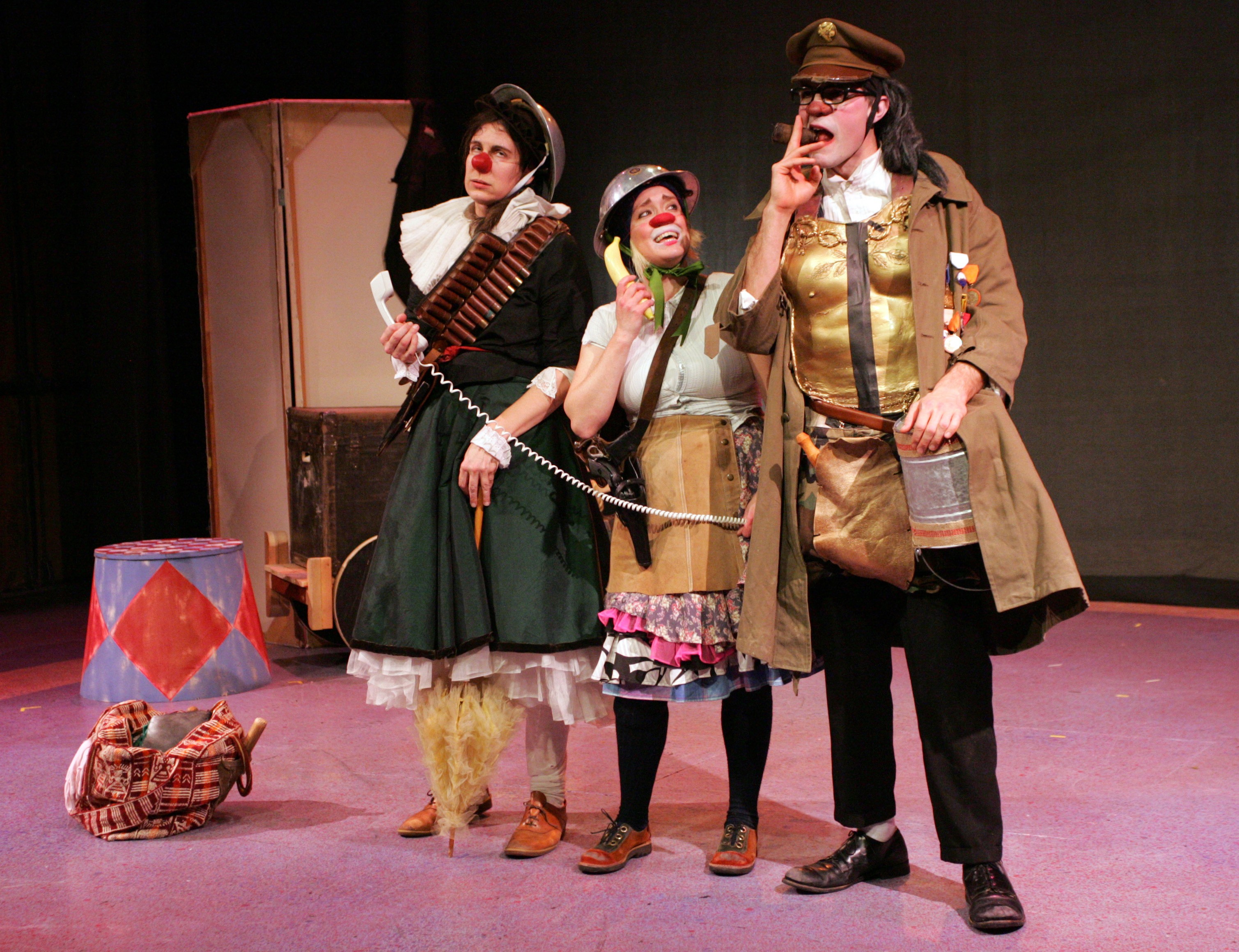 When she was an undergrad at Dell'Arte International, Lauren Wilson liked to clown around with fellow students Joe Krienke and Stephanie Thompson. Ten years later they find themselves back at Dell'Arte, this time as teachers. But it turns out they're still clowns.

So a decade after they put on the red noses and performed together, they're back with a new Dell'Arte show they've also written called Three Trees, beginning its second and final weekend in the Carlo Theatre tonight (Jan. 27). It's not for children.

In early 20th century Russia, two clowns called Bim and Bom had a routine called "The Laugh," which is described in an article by Joel Schechter in Theater Magazine. According to a Russian novel (The Iron Flood), this particular routine almost stopped the Russian Revolution of 1917, when Red Army troops were paralyzed with laughter. A version of it is at the center of Three Trees, as is this premise of clowns who stop an army and are punished for it.

This is the delicate form called a clown play, in which the clowns are characters -- in this case, we see them preparing as well as performing routines. Because it's a play, there's a narrative. But because these are still clowns, there are gags, and -- in Lauren Wilson's words from an interview -- "the beautiful absurdity of how the clowns from moment to moment relate to the universe. Clowns have a conflictual relationship with essentially the whole world, from the door they always stub their toe on, to the jacket that's always too small... There's a looping logic to their individual narratives. Yet there's an overall narrative to the play with beginning, middle and end, although also an eternal recurrence of things."

In the performance I saw opening night, these three clown actors each defined delightful characters, and they worked together with ease and grace. Stephanie Thompson plays a ditzy and endearing clown, sweet and sincere but tirelessly disorganized and clueless. Joe Krienke's clown is almost introverted, a bit detached, yet mercurial and versatile -- at one point, he's two characters fighting each other. In the movies he'd be played by Johnny Depp.

Lauren Wilson's clown is dressed as a little girl and speaks with a little girl's voice, but she's also the mom that keeps them together and on track, and the only one with a sense of an external reality, a "real world" with its dangers, which in this case includes war in an unnamed country or time. She's Alice in Wonderland as Mother Courage.

The rehearsals and routines we see are accompanied at times by distant explosions that get louder and presumably closer. Eventually the clowns perform a rude routine about an army general, for the nearest available audience: soldiers. But laughter brings the war to a temporary halt, so for this -- as well as being disrespectful to military authority -- the clowns must face the consequences.

The gags are well executed, and the use of props is inventive and adept. But don't expect the central gag -- "The Laugh" -- to be the funniest, most clever routine you've ever heard. With "three trees" as its punch line, it is meant to illustrate the power and mystery of contagious laughter, apparently over nothing.

The primary thematic ideas seem to be about the role of laughter in war and circumstances of oppression. Laughter threatens pretensions that make war possible, and therefore it has to be suppressed. Laughter is also the ultimate refuge in really bad circumstances, and perhaps more -- perhaps an assertion of humanity. Though elements of story as well as some striking images support these not altogether novel ideas, to be more powerful they might need to be more strongly expressed and integrated into the action. Still, especially given today's reticence which confuses criticizing militarism with condemning the military, they are points worth introducing again.

A secondary theme is that maleness causes warmaking. Popular as sexual politics when it was a new idea that the world would be more peaceful if women were in charge, it seems dubious as a primary explanation in the era of women generals and Sarah Palin. It does lead to the requisite bawdy jokes, though.

What's currently on view in Three Trees is engaging, provocative, challenging and entertaining. Above all, these intriguing characters and these three old friends clowning around are treats to see and savor. Ronlin Foreman is listed as "collaborator." Daniel Spencer designed the set, Michael "Spike" Jackson the lighting.

Coming Up: After the long post-holidays hangover, theatre is heating up again hereabouts. Beginning tonight (Jan. 27), North Coast Repertory Theatre presents the classic Lerner and Loewe musical My Fair Lady. Then it's joined by other shows for a remarkable February: a world premiere at Redwood Curtain, Rialto Theatre's second production, Amadeus at Ferndale Rep, more from Dell'Arte, North Coast Prep, and the first Kennedy Center American College Theater Festival regional to be held at HSU in 12 years, which brings four productions by other colleges to the Van Duzer in one week. But more about all of that next time.