The Industry’s Coming Out Party at Dell’Arte 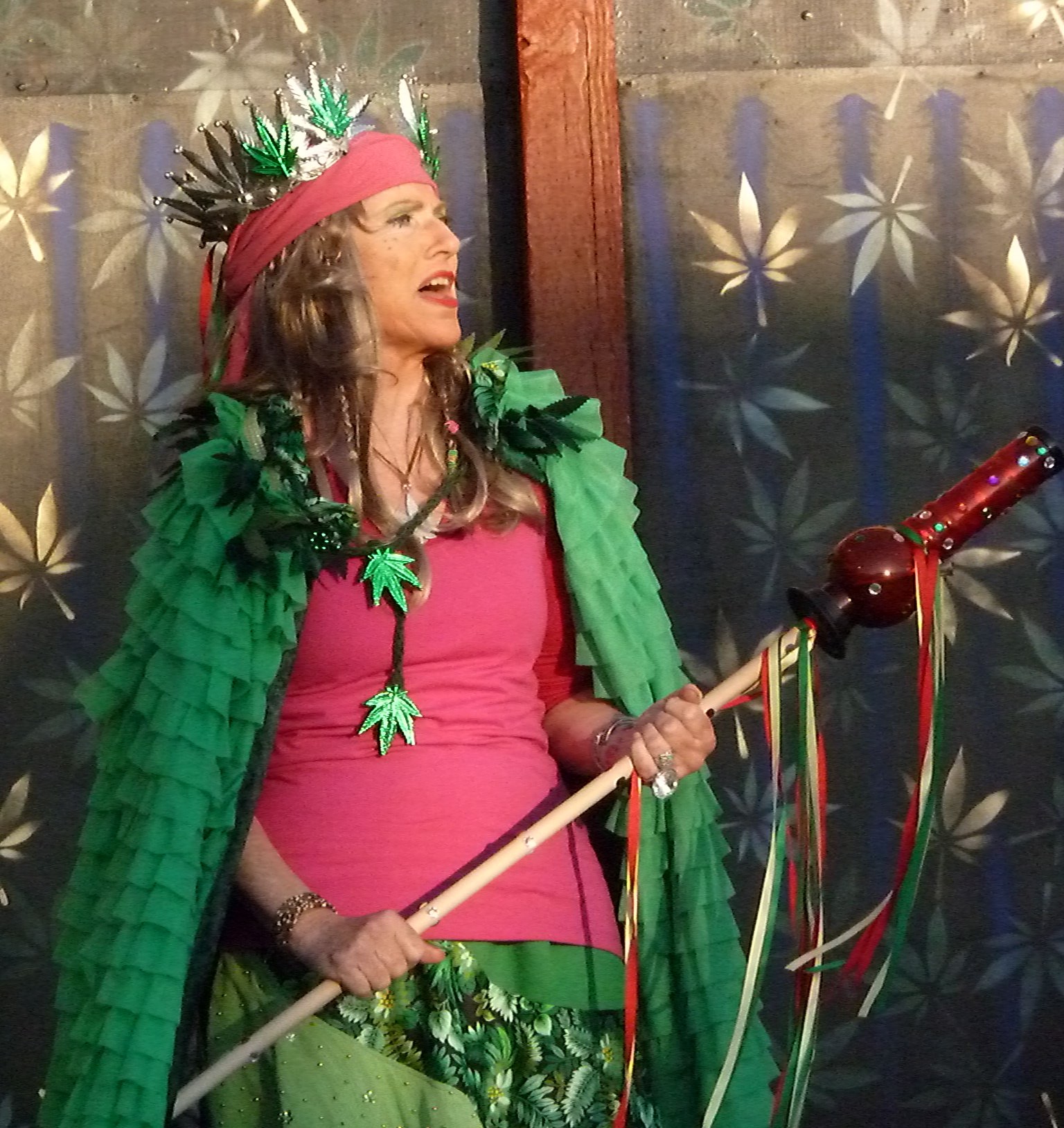 Back in the day there were long-haired heads and crew-cut straights. Out of their separate habitats and in the same public space, they still experienced different worlds. Even the same words meant different things.

I'm not so conversant with the current status (or vocabulary), but it seems fair to say that the Dell'Arte summer show, Mary Jane: The Musical, is another recent landmark in open integration, if only because its official sponsor is the Humboldt Growers Association, a business group formed to address issues involving medical cannabis. Maybe secret wads of cash that have aided various artistic enterprises need be secret no longer.

Regardless of opinions on NORML, the crowd that came to opening night looked very (Humboldt) normal. Perhaps fewer young families with kids sprawled on blankets but otherwise there was the usual age mix, the same local establishment figures, and even less of that weedy aroma around than on an ordinary afternoon in Arcata.

Though the event was something of a coming out party for "the Industry," the show itself suggested issues and complexities on cultural and personal levels without a unified political stand. It was a "normal" Dell'Arte summer show: music, laughs, spectacle and fun, with lots of local references and ironies. But the topic was, as Mary Jane says, "our morality tale, our telenovela, a romantic myth, a foreign invasion, a black market, a daily headline, a medical movement, the reason we've still got anything resembling an economy."

The pre-show music recognized the pre-'60s history of marijuana in America with tunes from the '20s and '30s black music culture, like "Smoking Reefers" about puffing misery away, which includes the lines: "It's the kind of stuff dreams are made of/it's the thing that white folks are afraid of."

Then after tunes from the '60s onward, the show stayed local and contemporary with the appearance of Mary Jane, a '60s refugee and original Humboldt grower, the "Duchess of Dope, the Princess Pioneer," who is being crowned Queen of the Emerald Ball. Joan Schirle, in a long dress and bright lipstick as Mary Jane, starts off with a buoyant, dazzling Broadway-style production number that would be a complete show stopper except that it's the opening song. Schirle's command of the stage and our attention carries through the evening, even as she becomes pretty much an emcee for a dozen more songs by as many local composers.

The tunes include Lila Nelson's tale of doomed love between an indoor and an outdoor plant, Jeff DeMark's narrative around discovering a Gin & Chronic drink on a Christmas vacation in Hilo (with a Hawaiian dance backing) and Tim Randles' bluesy "Why is Whiskey Legal and Pot is Not," with its nods to those '30s musical roots. Other tunes are by Curtis Thompson, Eldin Green, Zuzka Sabata, two by Joani Rose, and one each by Fred Neighbor and Joyce Hough, who also anchor the show with their priceless performances. The evening ends with a flamboyant, expertly executed Bollywood number, written by Tim Gray and starring Dell'Arte International student Pratik Motwani.

The humor could be light and sweet, as in the early dialogue between two Humboldt Honeys on the Plaza: Crazy Jeannie (Meredith Anne Baldwin), who believes her new Russian Concussion drink will end war, and Chanterelle (Janessa Johnsrude), a vegan who makes cream cheese from tofu and mayonnaise, because (in my candidate for the funniest line in the show, which was either an improv or late addition to the script) "Cream cheese is murder!"

But there's also bad vibes in "The Industry" by Scott Menzies, staged as second-generation cynicism and rebellion in heavy metal and hip hop: "I hide in your neighborhood, hide behind closed doors/ Hear the lamps buzz as mold spreads on the floors/Jacked up housing prices skewed economy/ I am The Industry, it's all about me!" There's also angry accusation:

This is less a play than last year's Blue Lake: The Opera and more like sprawling shows of previous summers. Though the script's content is substantial and threads of relationship suggest a story, what holds the evening's meaning and madness together is Joan Schirle's star power. We're always with her, and we'll follow her anywhere. Surely Schirle should eschew shamus shows and choose chanteusing. I know, easy for me to say.

Mary Jane: The Musical continues outdoors in the Dell'Arte Rooney Amphitheatre Thursday through this Sunday, July 3.

Coming Up: Red Light in Blue Lake, Dell'Arte's adults-only cabaret, happens in the Carlo Theatre on Friday, July 1 at 10:30 p.m. For other Mad River Festival stage events and a preview of other July theatre, check the new Muse, tucked into this issue.