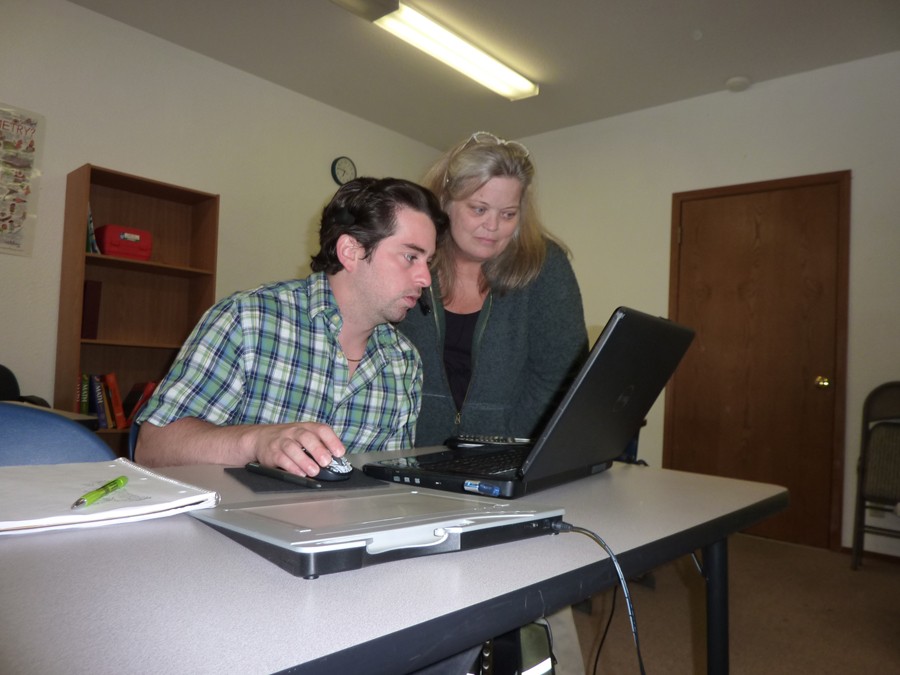 It's a sunny Thursday morning, a few minutes before 9 a.m., and inside a bland, fluorescent-lit office in a drab Cutten strip mall, Jordan Plocher, 37, and John Stott, 27, sit in molded plastic chairs at separate Formica tables, staring at the screens of their laptop computers. They're each wearing headphones -- the kind with just one earpiece and a little wraparound microphone, like the ones worn by workers at drive-through windows. They peruse books and type on their keyboards like studious Starbucks patrons. "Test test test," Stott says into his mic. When 9 o'clock rolls around, Plocher turns down the volume on the White Stripes' "Seven Nation Army" and begins speaking.

"All right, good morning, you guys," he says into his headset. "Let's go on to No. 1 on our list there. We have 'official business: homework turned in.' I got learning drills turned in from everybody, and I got the 'forms of government' assignment from everybody. Once again, I'm getting some really good work from you guys, so thank you for your hard work. OK, current events ... "

Moments later, Stott starts talking into his headset, welcoming his Algebra 1A students to class. The students themselves are nowhere near here -- they're still at home, for the most part, scattered all over Humboldt and the surrounding counties. The "class" they're gathered in doesn't actually exist as a physical space -- it's essentially a Web conference, with Mr. Stott guiding his students through the day's math lesson online. His students appear in a pop-up chat window, where they can type questions and interact with one another. Hooked up to their own computers, they can also hear each other speak. The lessons incorporate all the tools available on the Internet, from PowerPoint to videos to interactive maps and guided Web tours.

Plocher and Stott are teachers working in a new remote-learning high school called PacWest Academy, a division of Mattole Valley Charter School. Launched in August following years of individual remote-learning classes and a successful pilot program last year, PacWest Academy offers a complete high school education to students in five counties -- Humboldt and the four it borders, Del Norte, Siskiyou, Trinity and Mendocino -- without requiring them, or their teachers for that matter, to ever change out of their PJs. Fully accredited by the Western Association of Schools and Colleges, PacWest is also a public school and therefore tuition-free.

This virtual school is the brainchild of Program Coordinator Teresa Creech, who says her own son, a motorsports enthusiast named Dana Creech, would have benefited from something similar as a high schooler. "When he was kid, the only thing he wanted besides being an astronaut was to be a racer," she says. At 16 he entered a national four-wheeler competition and dominated it, wowing the judges with aerial tricks, defeating the national champion and attracting the attention of major sponsors. A condition of sponsorship, however, required Dana Creech to join the national tour. "Here we are in Eureka thinking, 'How's this gonna happen?'" his mom recalls.

It didn't happen easily, but through self-study, determination and a lot of parental whip-cracking, Dana Creech earned his high school diploma while nurturing a professional motorsports career (he now makes his living in the United States Hot Rod Association, launching off dirt mounds and over school buses in Monster Mutt, a truck with massive tires, floppy ears and a lolling tongue). Creech says there's a surprisingly large number of kids on the North Coast with extracurricular interests that threaten to derail their educations, be it skateboarding, snowboarding, running, whatever. "Some kids have traded their education for a chance at the big show," she says.

Add to these teenage competitors the area's many home-schooled kids, plus the students who live in remote towns like Blocksburg and Dinsmore, and it becomes clear that in this era of texting, YouTube and Facebook, a brick-and-mortar school is neither practical nor necessary for many teens and their parents. From a school districts' perspective it's financially untenable to send credentialed teachers into the distant corners of the region. And the system appeals to parents who have either logistical or ideological reasons to reject traditional schools.

Through a program called Elluminate, Plocher this morning is teaching American Government to high school girls in Fort Bragg, showing them an animated map of Asia, Africa and Australia while lecturing on the various forms of government worldwide. He has numerous tools at his disposal, including an Etch-a-Sketch-style touch-pad on which he can write and draw with a special pen and a software program that records his entire lesson, including his conversations with students. When the students at home take notes, their messages are automatically synced with the recorded lesson, so later, if one of them needs to refer back to a note she made, it will correspond with the image or video that was on screen when she typed it.

Sure, Creech says, the students don't get to interact face-to-face with their teacher or each other (unless they come in to the Cutten classroom, which some occasionally do), but she has found there to be numerous advantages to this cyber-classroom setup. For example, there's no bullying, hyperactive students aren't disruptive to others, and if one student comes down with the flu it doesn't spread all over campus. The technological bells and whistles can take faculty a while to master, she adds, but the students, who have never known a world without the Internet, cell phones and other gadgets for techie multitasking, seem to understand the complex system intuitively.

"I think this model is really gonna grow," Creech said. On a break a few minutes later, Plocher agrees, saying the only thing keeping this teaching method from really catching fire is the lack of public knowledge. "Somebody needs to tell Oprah," he says.