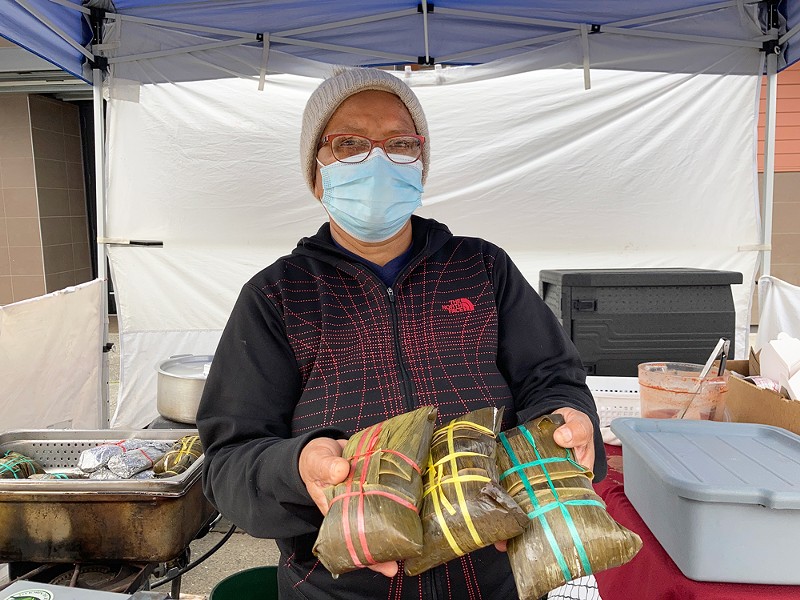 Order a nacatamal from the Nicaraguan Food stall at the Henderson Center Farmers Market on a Thursday and owner Alba Lopez will present you with a fat rectangle wrapped in dark banana leaf, trussed with colored ribbon. Warm and heavy in your hands is the Nicaraguan iteration of stuffed and steamed masa, moister than in its Mexican counterpart and the leaves imparting a smokier, more tea-like flavor than corn husks. Inside are slices of potato along with hunks of seasoned pork or chicken, or mushrooms and chiles for the vegan nacatamal.

Lopez recalls learning to make them from her grandmother Carmen in Nicaragua. She recalls her grandmother saying, "'It's good, watch me make nacatamales because one day you might need it for a living.' You never know what you'll need to survive."

That survival skill has turned into a business for Lopez, who sells nacatamales, tamales, stuffed and grilled corn meal pupusas and gallo pinto — the rice and beans ubiquitous at Nicaraguan meals — at farmers markets in Arcata, Eureka and Fortuna each week. Her daughter and son help with the business, but the food is all Alba, and it carries the markers of her home country's culture and history, as well as her own invention and adaptation.

"The story of Nicaragua has been the story of the war," says Lopez, who describes her life there as "happy" before the tumult of the Sandinista National Liberation Front's overthrow of the Samoza dictatorship in 1978 and the subsequent Contra War in the 1980s, in which the U.S. and Soviet Union backed opposite sides as an extension of the Cold War. "It's a game that nobody is the winner," she says.

Like many Nicaraguans, Lopez's family faced hardship and food scarcity. At the market, Lopez says, "I used to get milk and bread for my kids and nothing for myself. ... I remember when we can find eggs, all the adult people in the house said, 'Eggs are for kids,' and everyone respect that." Once, years later in the U.S., her brother-in-law was urging her to eat a little more. When she demurred, he confessed he used to sneak into the kitchen in the middle of the night to eat a couple eggs. His guilt, he told her, made him want to give her more food now that they had it.

"In my culture in Nicaragua, we don't waste food. If someone invite me and give me a plate of food, I have to eat everything," says Lopez. A few times, she says, she gave food to a homeless guy who came to her stall and said he was hungry, "because I can't say no."

Lopez's grandmother was the first to seek political asylum in the U.S. in 1979, after losing two children. "She came with a broken heart," says Lopez. Her grandmother immigrated to San Francisco and eventually moved to San Jose, where she died two years ago at the age of 98. In the late 1980s, Lopez, then in her 20s, joined her in San Jose before moving to Humboldt, where her daughter attended Humboldt State University. That was 15 years ago. "I feel good, I feel happy here. This is my town," Lopez says. "I declare that I want to be part of this town."

Lopez started working in restaurants and in 2010, started a nacatamale stand at G and 15th streets in Arcata, before selling wholesale to Murphy's Market and Eureka Natural Foods. With advice and encouragement from friends at the farmers markets, she started selling at the North Coast Growers Association markets where she could get a space. Since 2018, she's been selling direct to customers instead of through grocery stores.

The items on the white board menu reflect the history and cultures of Nicaragua, from its Indigenous roots to its Spanish colonial influence, as well as the Afro-Caribbean flavors from the Atlantic side of the country. Lopez's own family history straddles the country and its regional cuisines, as her great-grandfather Chano was Black and from the Atlantic/Caribbean coast. Since his name was Moreira and it was customary for enslaved people to go by the slave owner's name, Lopez says her family figures their ancestors were abducted into the Portuguese slave trade in the Caribbean. Her great-grandmother Martina fell in love with this "handsome guy" and moved to the Pacific Coast, where they set up a coffee farm.

Nacatamales, Lopez says, are "an ancient food" from Indigenous people who used banana leaves as a natural preservative and seasoned pork and corn masa with mint, garlic and onion. From the Caribbean coast, she says, come dishes with lots of coconut milk and spices, like her grandmother's banana bread, made with malanga root, burnt sugar, vanilla and cinnamon. With no eggs or butter, all its richness is derived from the coconut milk. "You eat that bread with hot chocolate or rice milk as a child in my country," she says. It's an item she hasn't sold at her stand for a while, but it could make a comeback and can be special ordered, along with yuca, malanga and other specialties. (The regular menu can be found at www.nicarauganfoods.com.)

The pupusas — balls of masa that are hand rolled, stuffed and flattened before pan frying — are a traditional food from El Salvador. But war drove Salvadoran refugees to Nicaragua in the 1980s. Lopez learned by watching them making pupusas in the market there and developed her own recipe. "I integrated more ingredients and the flour of the nacatamale is in the pupusa," she says, along with Nicaraguan flavors like the turmeric — "a magic food for special flavor" — that give the masa its golden color. Similar to the Salvadoran cortido with which pupusas are often served, Nicaraguan ensalada, a tart cabbage slaw with onions, carrots, lemon juice and a little spice, comes on the side, along with a thin, bright salsa. Lopez says much like gallo pinto, it goes with everything at every meal.

For now, Lopez does her prep at El Pueblo Market's commercial kitchen but she's working on renovating a certified kitchen of her own, hopefully by next year. She hopes the space will allow her "to cook and to create whenever I want," as well as sell to-go orders throughout the week. Getting ready for a Saturday crowd at the Arcata Farmers market can mean starting at 3 a.m. to crank out some 50 pupusas, stew chicken and make tamales and nacatamales, which take about four hours.

Lopez laughs and says she used to tell her mother, "You cook good but never like my grandma." Now her granddaughter says the same to Lopez's daughter. That, she says, is the way it is with a grandmother's cooking. And her customers seem to agree.

"I feel super satisfied when people come back and say, 'Thanks for cooking — that's good food.' More than money," Lopez says. "I feel good, I feel special."