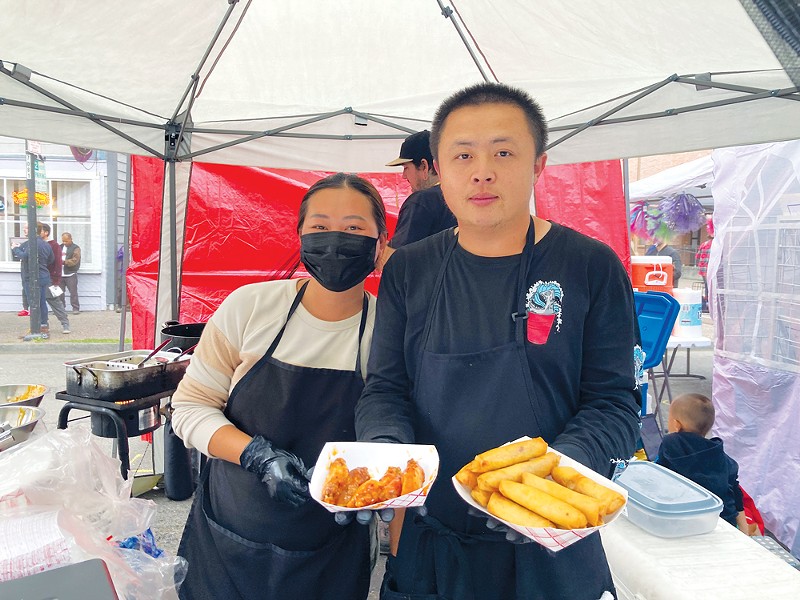 Photo by Jennifer Fumiko Cahill Mai Vang and Thao Yang at the Yang’s Kitchen stall at the Friday Night Market.

The circular Yang's Kitchen tent set up in Old Town for the last Friday Night Market of the year resembles a beehive. Owner Thao Yang and his wife, Mai Vang, dart around and past one another from the bubbling fryers to the stainless steel bowls of sauce and up to the front window to pass paper trays of eggrolls and saucy chicken wings to a young man taking orders and calling out customers' names to the cluster of people on the curb. Around the sides and the open flap in back of the tent, a handful of friends and family are milling and chatting.

Yang's Kitchen is one the few Hmong-owned food businesses in Humboldt County and among those, possibly the only food vendor or restaurant. Yang has been making the rounds selling mainly wings, eggrolls, crab cheese puffs and fried rice and noodles at local events and on Wednesdays at the Bigfoot Taproom in McKinleyville. But he's got his sights on expanding with a broader menu that includes more Chinese and Hmong dishes, as well as a truck from which to sell them.

Born and raised in Eureka, Yang says the climate drew his Hmong parents Chong Yang and Va Xiong, who immigrated from Laos after fighting for the U.S. during the Vietnam War, to the North Coast after stints in Boston and Fresno. "Eureka is very similar to Laos so my parents love it here," Yang says, explaining the region they're from also has a cool climate by the ocean, forests and mountains, as well as good hunting and fishing.

Like many Hmong Americans, including his parents, Yang has mainly been doing farm labor, growing vegetables and raising animals. But for the last 10 years or so, he's been thinking about moving from food production to selling food. "It was time to do something else — I've been farming my whole life." He'd worked for a friend at the former Mekong Café in Old Town, but he first learned to cook helping his mother at home — no small task in their household.

"When you're cooking Hmong food, they don't like just one type of dish," says Yang, "they like varieties, so we do four or five dishes ... we have a feast." Big celebrations are on a whole other scale. "We do big feasts when we do family reunions. We'll butcher a whole cow or a whole pig, [and serve] some stewed, some stir-fried, some soup, some barbecue." In his family, of course, that includes some of the items on the Yang's kitchen menu. "We cook a lot of wings, too, but we do deep fried, dry rubs. ... A lot of the Hmong elders aren't into all that sauce ... not like us young people," he says with a quick laugh. "The elders are very picky with what they eat," and if they don't like what you've made, "They're not scared to tell you."

To up his game, Yang traveled to Phonsavan, Laos, for a three-month cooking course. "After eating the Lao food in Laos and in the States," he says, "I can really taste the difference." Eventually, he wants to incorporate what he's learned for both traditional and fusion dishes. Traveling also gave him more time with Vang, whom he met at a five-day-long New Year's celebration in Laos in December six years ago. A year later, they married, though bringing her to the U.S. was a difficult two-year process slowed by the pandemic. "It was really tough ... we made it," he says, their 4-year-old son talking happily in the background.

Vang's help with the business is crucial, says Yang. "Her cooking [both Lao and Hmong] is very authentic. She's been cooking for her family her whole entire life, since 8 years old." The couple has also gotten a hand finding a scarce commercial kitchen to work out of from old friend Ronnie Worasen, whose Hunan Restaurant they're using for prep ("Hunan Restaurant's Chinese and Lao Revival," July 23, 2020). He and Worasen grew up together, says Yang, and have known each other for some 30 years.

Starting out with accessible, well-loved Chinese snacks, Yang hopes to create a solid base. "Everybody loves that, you know." So far, it's done well, most days selling out of 500-800 eggrolls, 60 pounds of wings, and full chafers of fried rice and chow mein, which emptied in only a couple hours. With more demand, Yang has had to hire more help for prep and he's now on the hunt for a food truck.

Yang says he'll keep menu favorites once he scores a truck — and hopefully a brick-and-mortar restaurant someday — but he'll be able to add more Chinese takeout classics like kung pao chicken, as well as Hmong stir-fries and soup. "A lot of Hmong dishes [are] pretty healthy for you," he says, with "a lot of vegetables, not too greasy." Though less saucy, the Hmong dishes he wants to serve are flavorful with ginger, chili peppers, lemongrass and garlic.

Until then, Yang is staking out vendor space at upcoming events, like the Oct. 16 Sara Bareilles concert in Halvorsen Park. He's even weighing taking a shot at Bear River Casino Resort's Taco Fest the day before, but it depends on whether his friend, a skilled Mexican cook, can help him out. He's up for trying something with quesabirria, maybe in an eggroll. Wherever you see the Yang's kitchen tent next, remember it sells out fast.

Jennifer Fumiko Cahill (she/her) is the arts and features editor at the Journal. Reach her at (707) 442-1400, extension 320, or jennifer@northcoastjournal.com. Follow her on Twitter @JFumikoCahill.