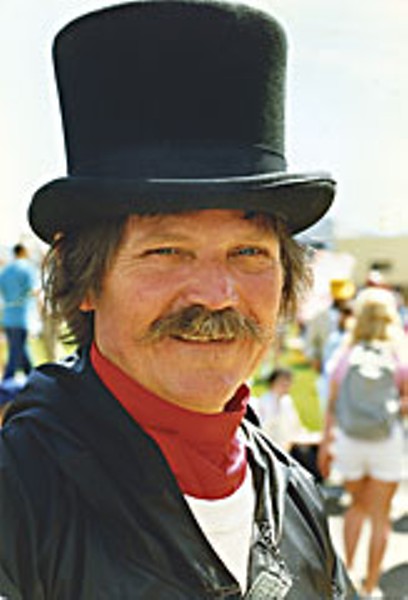 Considering the rumor that Hobart Brown's last words were, "Alert the media," chances are you've heard the sad news: Ferndale's world-renowned artist died from pneumoniain the early morning hours of Wednesday, Nov. 7, at Redwood Memorial Hospital in Fortuna at the age of 73.

Best known as the "Glorious Founder" of the Kinetic Sculpture Race, a Humboldt County tradition for 39 years, Hobart's legacy stretches beyond Kinetic madness.

Hobart Ray Brown was born Feb. 27, 1934 in Hess, Okla. to a teenaged mom. The family eventually migrated to Southern California. Hobart attended high school in Los Angeles. After learning welding skills working at an airplane manufacturing plant, he decided he wanted to become an artist.

He moved to Humboldt County in 1962 with a wife and child in tow and initially landed in Eureka. That's where he encountered Viola McBride, matriarch of an old Ferndale ranching family with an interest in the arts.

As Viola's son, Andy McBride, recalled, "We met him when he and his wife Maggie had an art gallery in Eureka. I guess the rent was too much, so my mom convinced him he should move to Ferndale. She sold him a building she had there."

At the time Ferndale was a sleepy cow town full of weatherworn Victorians. Main Street was lined with empty storefronts. Viola was actively engaged in revitalizing the community. Bringing in an art gallery was part of the plan. The town had already instituted an annual arts festival.

It wasn't exactly easy making a living as an artist/gallery owner in an isolated village like Ferndale. According to McBride, there were times when Hobart made his mortgage payment with the whimsical wire sculptures he crafted in his studio. "And that was fine with my mom," said McBride. But over time Viola's plan worked. More artists moved in and Ferndale was transformed into an art tourism destination. "Eventually the value of the building went up enough that he was able to refinance through the bank across the street and pay my mom off," McBride said.

The change to the town didn't come without resistance. As Stan Bennett, another long time Ferndale metal artist, recalled, "The first time I came to Ferndale there was a sign over the bar at The Palace that said, ‚ÄòHippie scalps: $2.' There were those who wanted to run off the alternative people and burn down the houses they lived in. They wanted [Ferndale] to stay a cow town, but it was too late. The artists and tourists took over. Hobart helped change things just by being there and doing his thing, refusing to bend to the cowboys and such."

The transformation may have been eased by Hobart's personal style. While he dedicated his life to the arts, his approach was from an egalitarian perspective, mixing lowbrow and highbrow art and infusing everything with a sense of fun.

The ultimate example of this is the Kinetic Sculpture Race. As the oft-told tale goes, Hobart converted his son's tricycle into a five-wheeled "Pentacycle." Another Ferndale artist, Jack Mays, built a human-powered tank. Someone suggested a race.

The rest is history: The first Kinetic Sculpture Race took place in Ferndale on Mother's Day 1969. Word had spread (in part thanks to a photo op with Congressman Don Clausen riding the Pentacycle), and it's said thousands showed up to watch. A number of other artist types also created sculptures.

In the end, neither Hobart nor Jack won the race. As Bennett reported in his 1975 book, Crazy Contraptions, "The Grand Champion was Bob Brown of Eureka, driving a kinetic turtle that laid eggs, emitted steam and occasionally produced a mating call."

Of course, as Hobart was fond of saying, "Losing can be as glorious as winning if you do it right."

As the race grew, for the most part under Hobart's stewardship, Ferndale grew more tolerant of the crazy artists who'd come to town. "Hobart actually taught the community something about understanding other people, different people, taught them how to get along," said Bennett. "He was good at that. In fact, some of the farmers ended up entering the Sculpture Race."

Over time the race evolved into a cross-country affair with all-terrain human-powered vehicles running from Arcata to Ferndale each Memorial Day weekend. It became a grueling, Sisyphean thing, with sculptures navigating a course though sand and mud, going nautical with bay and river crossings, all with pilots dressed in wild costumes.

Hobart's standard get-up, a pair of striped workman's overalls contrasted with a tails and a top hat, served a dual purpose: It reinforced the collision of high- and lowbrow art, and it identified him as the ringmaster, the mad impresario behind Kinetic craziness. As he explained in an often-repeated sound bite: "We're adults having fun so that children will want to grow older."

He was serious about the importance of fun. He saw the race and his life work as a bulwark against suicide. One of his proudest moments was in 1999 when he was nominated for a Nobel Peace Prize by Richard Langfort, a Humboldt State University psychology professor who studied youth suicide.

As part of his mission, Hobart became something of a Kinetic ambassador. He wrote a book about the race, Hobart Tells All, that was part fanciful autobiography, but mostly an elaborate instruction manual for running a sculpture race. The Arcata to Ferndale race became the Grand Championship as other similar events popped up in Baltimore, up and down the West Coast, even in Australia and the Czech Republic.

It may go against the standard concept of racing, but as Hobart defined it, winning was never the goal in a Kinetic Race. Instead the idea was spectacle, or as Hobart put it in a trademarked phrase, one raced "For the Glory!"

As Kinetic racer Duane Flatmo explained, "Hobart rolled out this giant red carpet, leading to a big stage called ‚ÄòThe Kinetic Sculpture Race' for all of us to act out our ideas, fantasies and alter egos, a place we could forget all our daily problems and come together as one big family with a common thread."

The fact that the race was not about making money has proved problematic, as did Hobart's Peter Pan attitude toward financial matters in general. Throughout the course of the race's long history the Glorious Founder struggled to find a way to make it self-supporting, and for a time corporate sponsorships footed the bill. But Hobart often resorted to borrowing from friends, many of whom ended up being perceived as enemies.

He sold the race more than once, but no one else could figure out how to make it break even either, and further legal complications ensued. When it seemed like the 2007 race might not happen, a consortium of women who'd been crowned Kinetic Rutabaga Queen joined forces with Hobart's friend, "Kinetic Seer" Ellin Beltz, to ensure that the show, and Hobart's dream, continued on.

Ask just about anyone from the Kinetic camp about Hobart's legacy and they'll tell you something akin to what Flatmo said: "He inspired kids and adults alike to go outside their limits, to take the leap."

"It's such a powerful legacy he's leaving," said reigning Kinetic Rutabaga Queen Emma "The Enchantress" Breacain. "We have to carry it forward and keep having fun."

Of course for a Kinetic Queen, the race is Hobart's primary legacy. "It's about fun, freedom, ingenuity, creativity, everybody bringing what they have to the party," said Queen Emma, "but also about forwarding human-powered technology, educating kids, and, really, making the world a better place."

As to those already famous last words, said Queen Emma, "Who knows if it's true? But it would be just like him." Then again, facts may get in the way of legend, said Nancy Courtemanche, a longtime friend of Hobart who serves as a volunteer chaplain at Redwood Memorial. "I've heard that those were his last words, but the truth is, Hobart was unconscious and didn't speak after Monday, and he died at 1:15 in the morning Wednesday," she said. "The only ones there when he died were me and the nurse. But I'm sure he would love it that people think those were his last words."

And if people can't agree as to whether that was what he said or not, that too would be just fine in Hobart's world. "He loved the controversy," said Courtemanche. "I remember he told my husband and me one time, ‚ÄòIt doesn't matter what they're saying as long as they're talking about me.'"

Talking about the Glorious Founder is part of the plan for the "Celebration of Life" for Hobart Brown scheduled for Saturday, Nov. 17, at 5:17 p.m. (two minutes after his gallery's closing time) at the Ferndale Pavilion, aka Fireman's Hall, at 100 S. Berding St. in Ferndale.

The first portion of the event, with Courtemanche officiating, will be a time to share stories about Hobart. A silent candlelight walk commences at 7:17 p.m. with attendees proceeding to Hobart Galleries at 393 Main Street for a short ceremony. A New Orleans-style second line parade follows with the Royal Kinetic Madness Band bringing the madness back to the pavilion for potluck festivities. Attendees are asked to dress in Kinetic regalia (or any costume) to honor the fun-loving nature of the Race and its Glorious Founder. For further details contact Shaye Harty of Kinetic Universe at 499-0643 or rutabagaqueen@gmail.com.