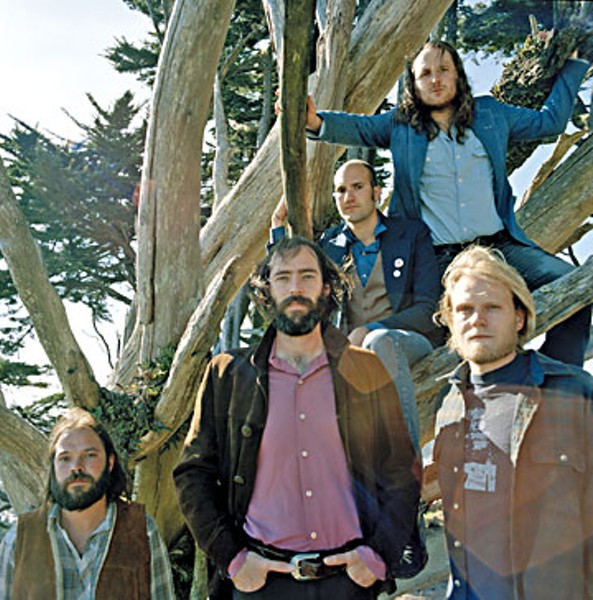 I don't imagine they know each other, but Ethan Miller and Mario Matteoli have followed parallel paths. Both were born and raised in Eureka. Both left Humboldt County just out of high school and established music careers elsewhere, then quit their bands to establish new projects. And both are coming home this week for shows at the Jambalaya.

Matteoli relocated to Austin, Texas, with some like-minded Eurekans and formed the successful alt. country band The Weary Boys, then left that band to go solo following a new muse.

Miller moved to Santa Cruz and formed the successful alt. rock band Comets on Fire, then left that band to explore new musical directions with a band called Howlin' Rain.

"I'd worked really hard for my part with Comets on Fire, and really dedicated my life to that, both my musical life and my personal life," said Miller, reached at his home in Oakland. "We'd made four albums. When you think of yourself as an artist, you never want to become too comfortable with what you're doing. You don't want to think, 'Hell, I can dial this in. Another Comets record? No problem,' like this is what I'm known for, I'll do that again."

So, in part because he was moving in a different direction, musically, but also just because he felt a need go his own way, he left Comets at its zenith. "I had songs I'd written, a catalog of songs accumulated that were more personal to me, that were not something I was writing for this entity that was already formed. They were something for me, where I could control the overall vision. I wanted to let them take on a life of their own."

Does the Howlin' Rain name connect back to Humboldt? "Maybe a little bit subconsciously," he said. "Certainly the physical and metaphysical characteristics of the area, especially the Southern Humboldt area, will forever be part of my artistic landscape. My family owns a summer cabin in Southern Humboldt so I spend a lot of time up there. I go there to write and to relax after tours. And my folks are still up in Eureka, so I'm up there a lot too."

And he's booked to play here twice: Wednesday, May 28, Howlin' Rain plays at Jambalaya with two Eureka bands, Arrogant Hare and Zak Institute, both including members from Miller's local musical past. H. Rain returns Sept. 10, opening for The Black Crowes at the Van Duzer. "That was a fun surprise," said Miller. "I think that one will be a bit more expensive, and harder to get into."

Former Weary Boy Mario Matteoli was working his way up the California coast with a new solo disc when I found him in SoCal. Despite his nine-year Texas roots, the record is called Golden State, in part to reflect a brighter view of the world he's taken on since falling in love.

"You know, my last [solo] record was kind of depressing, so I was trying to make this one more happy, hopefully not sappy," he explained. "It's hard to come up with something that's happy and not cheesy. The thing is, it's easier to write songs when you're all depressed, but it's not an easy way to live. You have to try to be happy and write good songs, and not make a wreck out of you life. A lot of the great ones, guys like Townes Van Zandt and Hank Williams, they just totally destroyed their lives for their music. It was a beautiful thing, but tragic. I don't want a tragic end."

Mario will be at the Jambalaya Friday with his fiancée Cayce on harmony vocals and tambourine and backing from his older brothers, Jamie and Jason. Advance tickets are advised, if you can get 'em.

Extended versions of the Miller and Matteoli interviews are online at The Journal Blogthing (ncjournal.wordpress.com)

I must be the wrong generation for Night Ranger, who, I'm told, are back to show that "(You Can Still) Rock In America." I don't know that song or any others by the S.F. hair metal stadium rockers who sold something like 10 million records in the '80s. Three out of five of the original members are still on board, now playing amusement parks, county fairs and casinos — Cher-Ae Heights for example, where they rock out on Thursday.

They're calling Thursday's show at the Arkley Center "Cowboy Storytellers," which you might guess means cowboy poets. It doesn't. The benefit for the Eel River Valley Foundation (associated with Redwood Memorial Hospital) features three country singer/songwriters you've probably never heard of, although you may have heard their songs if you listen to country radio. Aaron Barker has written 23 Top-10 songs for guys like George Strait ("Easy Come, Easy Go"). Paul Overstreet has 27 Top-10s under his belt, including Kenny Chesney's "She Thinks my Tractor's Sexy." Allen Shamblin wrote a ton of songs, including hits for Toby Keith and Keith Urban, plus he co-wrote a song I actually know — I don't hear much country radio — Bonnie Raitt's big hit, "I Can't Make You Love Me," from her Luck of the Draw album.

Meanwhile, Thursday, next door at Auntie Mo's, it's something quite different: psyche rock trio Dead Meadow, relative big timers in the psyche world, touring behind Old Growth, a new disc on Matador. They share the Mo's bill with local alts Tanuki and The Common Vice.

Stoner doom duo The Fire Demons (with guitar shredder Robert Tripp and ex-Hitch guitarist Jeff Langdon on drums) play Thursday at the Boiler Room with Eureka hip hop headbangers 4 Star Bravado. Saturday The Demons hit the Alibi with Portland party punks The Grip. Tripp notes: "We have a bunch of new material that we'll be performing at these shows and we expect that the gigs will be a great time for all. We're even giving away free band T-shirts to the first five people who ask. And of course there will be a wall of amps and speakers!" He also mentions that he and Jeff are both visual artists with shows up currently (Jeff at Arcata Artisans, Robert at the Coffee Break). And, "Oh yeah, my other band The Hard Ride is playing garage blues Sunday night at the L'il Red Lion with a punk band from Montreal called CPC Gangbangs. No idea what that means, but that show will also kick ass!" What does it mean? Says their record company, Alien8, re: CPC G, "Although their sound is celebratory and consuming, it is often evil as well and full of the promise of self-destruction boosted by copious amounts of cocaine, LSD and Canadian Maple Whiskey." Hmm.

Still talkin' Thursday, you have "funktronica" by San Diego-based BluSirkut at Humboldt Brews. These guys used to be Karl Denson's band, now they're on their own, offering, "mashed potatoes and gravy nu-jazz, with cornbread drum 'n' bass, smothered in collard greens and a big ass side of sampledelic delight." Friday at HumBrews The Fickle Hillbillies jam with special guest David Hines on flute.

Ole's back with another Diamondback joint, a hip hop night at the Red Fox Saturday with Cool Nutz from Portland and locals LCA and The Mendo Green Team in support of Houston's renowned Devin the Dude, a rapper with a sense of humor who broke out 10 years ago with his Odd Squad buddies. The Dude has a couple of new albums, a hits package and one he calls a "mixtape" titled Smoke Sessions Vol. 1, presumably first in a series. Ole calls this a "Funk A Lake" Party (no idea what that means); he also declares, "The Dude abides!"

A Mark Lovelace for Supe benefit Saturday at the Jambalaya includes Cajun music by The Bayou Swamis, DJ Red on the turntables spinning '80s tunes, plus an ad hoc super-group called I Love Lace teaming Mike "The Commish" Wilson from Dynamite Sweater, Rubberneckers' drummer Brendan "Wang!" Ottoand that fab folky Lila "Madeline" Nelson. I'm told (by Lila) that the songs are already written and all of them are about how cool Mark is.

At Mosgo's Saturday, DeatHat, a trippy cool/spooky alt. something band from Santa Cruz/San Jose (with a great name) based around a marimba and a bass. Greg Lojko of the 'Neckers opens.

Coming from SoCal to Humboldt Brews Wednesday, May 28, Anthony Smith's Trunk Fulla Funk, which is, in Smith's words, "an infectiously grooving sextet featuring stellar musicians from across the country [playing] a hybrid of classic funk/rock/soul influences, with all the rock and jam-oriented improvisation you might expect."

I got a little bit of static over last week's Pollstar preview of the next CenterArts season, partly because, "You can't believe everything you read in Pollstar" (that Gipsy Kings date was not fully settled), but mostly because some of you ignored my advice and called the ticket office asking questions. In addition to the early tix for The Black CrowesSeptember show,*tickets go on sale next Friday, May 30,*for anAsylum Street Spankers gig Sept. 4 at Mazzotti's and for Steel Pulse'sAug. 28 KBR show (same night at The Waifs).

Wait. There's more. Also on August 28: an AS Presents show outdoors on the lower Soccer Field they're calling the Hum-week Concert 2008, apparently named for this column. So far the line-up includes Ozomatli, Brett Dennen, !!! (aka Chick! Chick Chick!) and the Upright Citizens Brigade comedy troupe. I approve.

Sad times at KMUD: Sunday around the time the Redwood Community Radio folks were celebrating the life of former music director Kate Klein, who died recently, word traveled via the grapevine that JJ Hall, co-host of "Da Coconut Wireless" Tuesday afternoons, had suffered a fatal heart attack the night before. I imagine they'll be thinking of JJ Saturday afternoon when the station throws the annual KMUD Block Party in front of its Redway studios. They'll have a bar, BBQ, birthday cake and music of course: The N-P-K, Budd Rogers, Antonia Lamb, Cory Hanna, Quantum, Dan Nicholson among others. I'm thinking some slack key guitar would be nice to say goodbye to JJ.