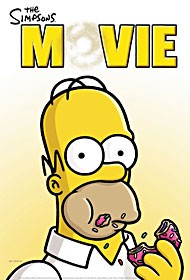 Fans of Homer Simpson, and they are legion, need no introduction to his big-screen debut in The Simpsons Movie after 18 seasons on TV. The story is not a surprise: Homer must save the world from a disaster of his own making. With a new pet pig and the familiar cast of voices that includes Dan Castellaneta, Julie Kavner and Nancy Cartwright, The Simpsons Movie arrives on Friday, July 27, ready or not. Rated PG-13 for irreverent humor throughout. 97 m. At the Broadway, Minor, Mill Creek and Fortuna.

In a change of pace, Catherine Zeta-Jones stars in No Reservations , a remake of the charming 2001 German film Mostly Martha ( Bella Martha ), directed by Sandra Nettelbeck. This version, directed by Australian Scott Hicks ( Shine ), has Zeta-Jones playing a top-tier chef whose career takes a turn when she has to take care of her young niece (Abigail Breslin, Little Miss Sunshine ). Further complications ensue when the restaurant owner (Patricia Clarkson) hires a new sous-chef (Aaron Eckhart). Rated PG for some sensuality and language. 115 m. At the Broadway and Mill Creek.

The latest Lindsay Lohan exploitation film is I Know Who Killed Me , wherein a young woman named Aubrey (Lohan) is brutalized by a kidnapper but claims to be someone else when rescued and says the real Aubrey is still in danger. If not Cuthbert, why not Lohan? The cast also includes Julia Ormond as Aubrey's mother. Rated R for grisly violence, including torture and disturbing gory images, and for sexuality, nudity and language. 115 m. At The Movies.

The comedy Who's Your Caddy? stars Outkast's Big Boi (who wrote a number of songs for the Idlewild soundtrack) as super-successful rap businessman C-Note, who runs into snobbish trouble when he tries to join the Carolina Pines Golf & Country Club. But you don't become successful in business unless you're creative. PG-13 for crude and sexual content, some nudity, language and drug material. 103 m. At The Movies.

The final film of the July Eureka Library Barbara Stanwyck series is the 1948 thriller Sorry, Wrong Number , about a bedridden woman (Stanwyck) who accidentally overhears a phone conversation between two men planning a murder. Burt Lancaster co-stars. The program, hosted by Charlie Myers, begins at 6:30, Tuesday, July 31 at the Eureka Library Main Branch.

HAIRSPRAY: Fans of "cult director" John Waters may remember his 1988 film Hairspray , but I would guess most people are more familiar with the very successful Broadway musical. Of course, in Waters' film the role of Edna Turnblad, mother to the teen dance aspirant Tracy, was played by the gloriously outrageous performer Divine (born Harris Glen Milstead), who died shortly after making the film from sleep apnea. In this new musical version of the film, this role is assumed by a cross-dressed John Travolta in a fat suit, and while he may not remind anyone of Divine, he manages to be very effective in the role by mostly playing it straight.

In fact, while the film may slip away from you as you walk out of the theater, it is high-energy enjoyment while you watch it. All of John Waters' films that I'm familiar with deal with "difference," and in Hairspray (the original film and the musical) the story centers on racial and weight issues in 1962 Baltimore. The story as presented in the movie musical is not particularly gripping in how it deals with either issue, but the fun in the film is the total commitment exhibited by the entire cast and in the clever choreography from director Adam Shankman ( The Wedding Planner ). The mood is set from the opening number, as a joyful and assured Tracy Turnblad (Nikki Blonsky, in a film debut) skips down the street on the way to school singing "Good Morning Baltimore." The viewer soon realizes that Tracy, despite being heavier than the cultural norm, has aspirations to appear on a popular TV dance showcase, "The Corny Collins Show." Of course, the slim girls already on the show oppose her, particularly Amber Von Tussle (Brittany Snow, John Tucker Must Die ), whose insufferably snobbish mother, Velma (Michelle Pfeiffer having a great time in a role played by Deborah Harry in Waters' film). Velma happens to be an executive for the station.

Race enters the picture when Tracy hooks up with a group of black students in detention hall after school as they practice their dance moves for the "Negro Day" that the Corny Collins Show allows periodically. The film is hardly a sophisticated examination of race or weight issues; it is, after all, a musical. But within its genre parameters, it at least raises the issues, and the viewer can take it from there. In its exuberance, the film glides right through all sorts of stereotypes, including the old "take off your glasses, let down your hair and become sexy" routine, as we see Tracy's shy friend Penny (Amanda Bynes, What I Like About You TV series) release herself from her repressive mother and her own inhibitions in an inter-racial romance with Seaweed (a very good Elijah Kelley).

All the performances seem effective, including Queen Latifah's as Motormouth Maybelle and Christopher Walken's as Tracy's dad Wilbur -- along, of course, with Travolta's. As Tracy, the character that drives the film, Blonsky is effectively bouncy and a good dancer. The songs don't seem particularly memorable, but the film's energy and movement more than make up for that. I had a good time even if I didn't walk out singing anything from the soundtrack. Sadly, though, the film was shot in various locations in Ontario, Canada, rather than in my hometown of Baltimore. Rated PG for language, some suggestive content and momentary teen smoking. 123 m. At the Broadway, Mill Creek and the Fortuna.

I NOW PRONOUNCE YOU CHUCK AND LARRY: That this Adam Sandler comedy opened the same day as Hairspray is interesting in that it makes the examination of difference in the musical seem deep. While I Now Pronounce You Chuck and Larry was not the total dog I expected, I can't say it was particularly funny either, with its gay, weight-oriented, sexist, racist and bathroom humor.

The film's premise involves two manly, heterosexual Brooklyn firemen who must pretend to be gay so one of them can receive health benefits under New York's domestic partners law. But the film seems so afraid of actually exploring this premise that it over-determines the two men's hetero credentials. Very early in the film, we see Chuck (Sandler) with various combinations of bikini-clad women. His belt notches are clearly established. His friend Larry (Kevin James from TV's The King of Queens ) is a widower with two young children who is still mourning the loss of his wife, whose picture we see prominently displayed in his apartment. And when Chuck finally agrees to help Larry out with the domestic partner thing and they have to live together while they are investigated by the state claims guy, Clinton Fitzer (a totally flat and unfunny Steve Buscemi), the very attractive Jessica Biel pops into the picture as Larry's attorney, Alex, so the viewer can know that Chuck is still really attracted to women. We know this because Alex undresses in front of Chuck (he's just a gay guy, right?), parades around in fetching bra and panties, and makes Chuck caress her breasts to prove that they are totally real.

Of course, Chuck and Larry can't actually kiss each other, so they substitute punching instead. Throw in some fat jokes and a soup?ßon of toilet humor, and you've got yourself an Adam Sandler film. The film would like you to believe it's actually illustrating how there is still a lot of hostility toward gay couples, but that two heterosexual guys pretending to be gay can go a long way toward correcting that homophobic attitude. Apparently, the Gay & Lesbian Alliance Against Defamation deemed the film safe for "conscientious viewing," so who am I to carp? I wonder, though, how to take Rob Schneider's uncredited and absurd portrayal of an Asian wedding coordinator?

I guess I just wasn't in the right mood when I saw this film. Alexander Payne and Jim Taylor ( About Schmidt ; Election ; Sideways ) were brought in to help with the script, but I can't imagine what they contributed. Rated PG-13 for crude sexual content throughout, nudity, language and drug references. (re-rated; originally rated R). 125 m. At the Broadway, Mill Creek and the Fortuna.

EVAN ALMIGHTY: Unfunny Christian-lite treacle-comedy about suburban Hummer-dumbo who wants to pave over paradise. But Morgan Freeman -- er, God -- commands him to build an ark instead. Rated PG. 105 m. At the Broadway.

HARRY POTTER AND THE ORDER OF THE PHOENIX: Rebel rebel -- in round five of the series, Harry and the gang buck government orders and found their own secret society, so as to better combat Voldemort, the big baddie. Rated PG-13. 148 m. At the Broadway, Minor, Mill Creek and Fortuna.

LICENSE TO WED: The Rev. Robin Williams don't want them kids gettin' married till they've been through the pre-marriage wringer. Rated PG-13. 110 m. At The Movies.

LIVE FREE OR DIE HARD: In the latest and perhaps last installment of B. Willis' "Die Hard" franchise, there's a bunch of computer stuff that's gonna asplode the world. Rated PG-13. 130 m. At the Broadway and Mill Creek.

PIRATES OF THE CARIBBEAN: AT WORLD'S END: The action moves to Singapore, where Davy Jones (Nighy) and Capt. Jack (Depp) continue their battle, with the profession of piracy in danger of extinction. Rated PG-13. 178 m. At The Movies.

RATATOUILLE: Pixar alert! A animated Parisian rat with a preternatural talent in the kitchen dreams of earning his Michelin star. Rated G. 120 m. At The Movies, Mill Creek and the Fortuna.

SHREK THE THIRD: When the lovable ogre is crowned King he tries to find someone more suitable for the role. Voices by M. Myers, C. Diaz, E. Murphy, A. Banderas. Rated PG. 102 m. At The Movies.