In Humboldt's housing market, neither a borrower nor a lender believe 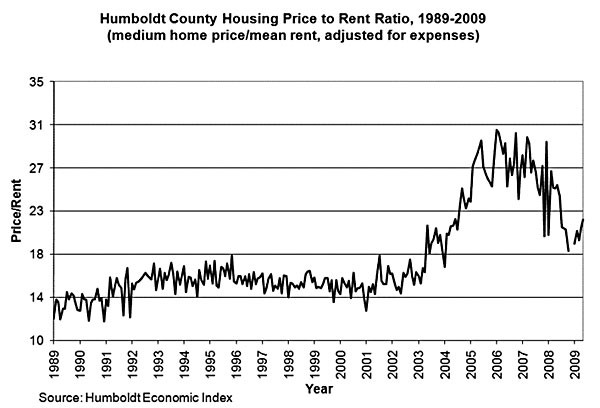 The latest numbers on county-wide housing affordability reveal something of an upward trend -- in prices, that is, not affordability. According to the Humboldt Association of Realtors, the median price of Humboldt County homes sold in May rose for a third straight month to settle at $285,000. That's up from $274,900 in April and $264,950 in March.

The bounce is a bit confusing given the economy's otherwise apocalyptic vibe and the commonly held belief that flatulence still emanates from the housing bubble. So what gives? Hard to say. For one thing, mortgage rates have been pushed downward (with help from the federal government). May's county-wide average of 4.95 percent was the lowest on the HAR charts, going back to January of ’99. That could have temporarily teeter-tottered prices upward by increasing demand.

Or maybe the local housing market has indeed bottomed out. That's what HAR President Eric Peterson believes. "I had forecasted just a few months ago that it appeared prices had finished leveling out," he told the Journal last week. If so, aspiring first-time buyers, now's the time! "Rates just don't stay this low for long," Peterson warned. Compare this assessment to what his predecessor, Tom Hiller, told the author (then a Times-Standard employee) in May of last year: "[I]nterest rates are not likely to stay where they are much longer," Hiller predicted. "Now is a good time to buy." Since then, interest rates have dropped by more than a point and the median price has fallen by $28,500.

In fairness, global economic meltdowns tend to make mockeries of all prognostications. And the current rate is unprecedented. But there are still signs that prices haven't dropped as far as they probably should. Here's one: The de facto rule of thumb is that housing costs shouldn't exceed a third of your total budget. Currently, the average-salaried Humboldter would have to pony up 44 percent of each paycheck to cover the average mortgage. (Compare that to just 29 percent a decade ago.) This is how foreclosures happen, or would be if this hypothetical applicant could secure a loan. Chances are, she couldn't.

"Our lenders are scared," said Janine Averill, loan broker/owner of Eureka's Briton Mortgage. "In this business, every loan is a puzzle," she said on the phone last week. "Before [the housing collapse] we were doing elementary school puzzles. Now they're all 1,500 pieces." Regulations also tightened in the 1990s following the savings and loan crisis, she said, but not this much. "In all the years I've been in business, this is the most complicated I've ever seen it."

Effectively, this means that fewer people qualify for loans, and those who do often must pay extra. A year ago, Averill said, all you needed was a 620 credit score and you'd be quoted a flat rate. Now, if your score's below a 740, your rate goes up. She punched in some numbers on a calculator and concluded that a borrower with a 620 credit score would pay $200 per month more on a median-priced home than someone with a 740 or higher. "A lot of people can't afford that," she said. "It takes them out of the market to buy a house."

Another way to look at market health is through the affordability index, which measures the percentage of households that can afford to buy a median-priced home. Currently we're at 21 percent, which is to say, forget it, typical family. The average home is way beyond your means. During the housing bubble, affordability bottomed out locally at 10 percent. Ten years ago it was almost 50.

Here's another indicator that prices might drop: The total number of homes sold in Humboldt County through the first two quarters of this year -- 373 -- is the lowest of the decade by far. (Almost 700 sold in the first half of 2004, for example.) Plus, another wave of adjustable-rate mortgages is scheduled to reset to higher rates at the end of the year, which will likely lead to more foreclosures. (California's 90-day moratorium on them expires in September.)

Won't that lower prices? "Uh, yeah," Peterson admitted uncomfortably. "Typically that's what you see." Realizing, perhaps, that this undercut his "buy now" argument, the pep fell out of his voice. "I may have had too much coffee," he lamented.

HSU Economics Professor Erick Eschker wasn't too impressed with the three-month streak of price increases. "Look at March of this year versus the peak in March of ’06," he said. "The median price fell from $349,500 to $265,000. That's the broad trend you look at." As for the current market, Eschker suggested checking the price-to-rent ratio. "That, to me, is the single most telling graph," he said.

From 1989 through 2002, the ratio hovered between 12 and 18 percent. As the bubble inflated, home payments skyrocketed to 30 percent above the average rent payment. While that gap has closed slightly in the last two years, it remains above 20 percent. "And now we're in a recession," Eschker said. "Just wait ’til all these furloughs start hitting Humboldt State and other state workers."

Still, Peterson said, recovering from his momentary lapse, the stats show that if you buy a house and hold onto it for at least five years, you won't lose money. "This is probably gonna come across as a cliché," he said, "but it's still is a very good time to be a buyer."