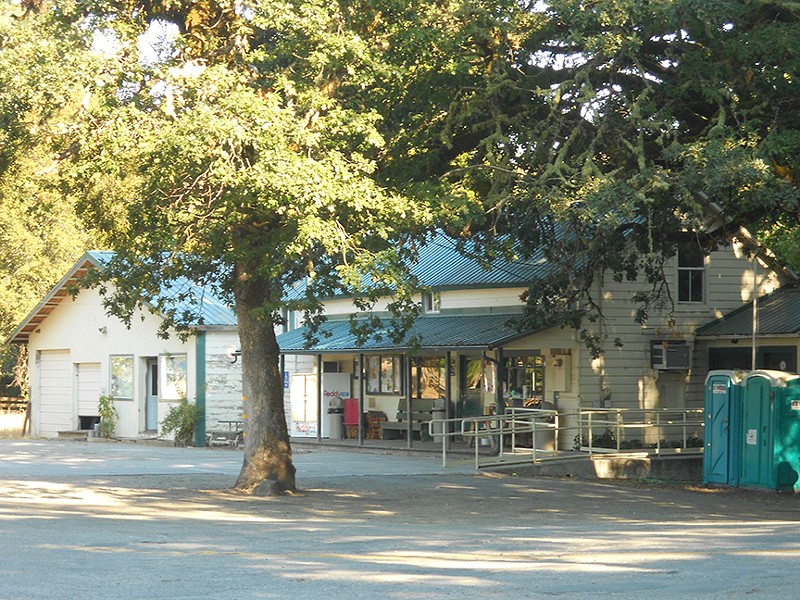 Photo by Linda Stansberry The town's lone store exerts a pull on just about everyone in and around Honeydew.

For decades Honeydew has been a one-stop town: one stop sign, one school and one store. At the height of the logging boom in the 1950s there was a community center, a church and a service station, but for as long as many locals can remember, the only site for congregation has been Honeydew's general store. People used to gather on the store's porch until the county fined store owners in 2006 for letting clients drink there. Undeterred, locals now carry their beverages to the nearby one-lane bridge to perch and gossip. The owners tried to get a liquor license and create a "beer garden" of sorts by setting up portable corral fencing around some nearby picnic tables, but patrons resisted being corralled, the set-up did not meet county requirements, and the project was quietly abandoned.

Now the epicenter of this very small town's social life may be expanding downstream, as lifelong Mattole Valley residents Mary and Raymond Etter prepare to triple the size of Honeydew's business sector by adding a cafe and a hardware store less than a mile down the road.

The project hasn't been without obstacles and detractors. The application to rezone the Etter's property, a small stretch of land between the main county road and the Mattole River, was filed in 2009 but only approved on July 9 of this year. Anita Punla, a senior county planner, had raised concerns over its impact on the Mattole River. After a rigorous environmental assessment, the county banned the project from using river water. The Etter family plans to drill a well.

Down the county road, across from the overgrown baseball diamond and the small Honeydew Elementary School, Honeydew Store owner Bobby Shinn is also preparing to drill. He fumes as he recounts the requirements to get his own new business, a burger stand, off the ground.

"We struck water at 30 feet, but the regulations say we have to drill down to 80 feet, so OK. The county doesn't make it easy on small businesses."

His diatribe is interrupted as a regular comes up to the counter with two gallons of ice cream.

"You know, I thought of you the other day. You know what I found?"

The woman beams. "What?"

"This little freezer that you can plug into your cigarette lighter in your car, for your ice cream. I'm not using it, so if you want, next time I'll bring it down for you."

The woman gives Shinn a big hug before leaving.

"It's more of a passion than a profession," he says. "You have to want to do more than suck money out of the community."

Shinn doesn't specifically say that his burger stand, which he hopes to have running "before the rains start," is meant to compete with the Etters' café. But he did oppose the rezoning. The original proposal submitted by the Etters called for "a warehouse for building and ranching supplies, a grocery store, a restaurant, a post office, mini-storage units and associated parking areas."

The idea of moving the post office in particular raised some hackles. The tiny building with its ornate metal P.O. boxes and wooden floors has been attached to the Honeydew Store since July 8, 1928. Inside the store, postal employee Terry Heady hands patrons their packages and overflow mail while asking about their families. She says that to her knowledge the post office is staying put. The Etters' 2009 application did state that the postal service had "already approached [them] for acquisition of a new site," but since then the Honeydew branch has faced the possibility of budget cuts and closure. After several meetings with community members, the postal service confirmed that its hours will soon be reduced to just four hours a day.

The Etters don't want to discuss their plans in detail at this point, according to Bobbie Johnson, Raymond Etter's daughter.

"The tentative plan is to have a cafe which will serve lunch and dinner — initially, a limited menu including burgers, fries, sandwiches and pizza," she said. She also confirmed that a grocery store is not coming in, for now — just a hardware store.

In a follow-up email, Johnson said the family hopes to wrap up the next round of the approval process, including securing a water source and getting a building permit for the cafe and hardware store, within a year and a half.

"Other future developments will be completely dependent on community interest and need," she wrote.

In the county's planning files, a petition supporting the Etters outnumbered another opposing the project by seventeen pages. There are 36 letters of support from both locals and tourists. But during a July 9 public hearing, Shinn told the Humboldt County Board of Supervisors that he worried about his livelihood and about the river. He used a water glass jammed with straws to illustrate the effects of expanded development on the Mattole. Supervisor Estelle Fennel asked Anita Punla to confirm that concerns regarding water use had been met. The rezoning was approved unanimously.

Linda Hartshorn, a Honeydew resident for 30 years, likes the possibility of a cafe.

"I'm excited to see new things happening in our community," she said a few weeks after the hearing, "We need a gathering place."

The letters sent to the county Planning Commission and Supervisor Rex Bohn expressed similar sentiments, with many residents praising the Etters' contribution to the community. For the last three years, the Etters have had a small business selling bulk fertilizer and lumber. Many residents hope the family's newest venture will create jobs.

Shinn has his doubts. He sees his store not just as a place to pick up ice cream and mail, but as an opportunity to enforce a code of decency. Not only does he refuse service to "meth heads, thieves and idiots," he also turns away anyone who he thinks is shopping for those he's eighty-sixed.

Still, "there's probably enough business here for two stores," Shinn concedes. "We'll see. It's all about customer service and taking care of the people. I'm sure the majority of the valley wasn't in favor of the change, but the people who were against it aren't exactly the types to poke their heads out."

Both Shinn and the Etters are descendants of families who have lived in the Mattole Valley for over a century, some of the few remaining locals who remember the area's past as a prime location for logging, fishing and raising livestock. Now greenhouses dot the subdivided ridges that were once unbroken stretches of ranch land. An influx of new homesteaders has created a demand for new business and change. The best symbol for this change might be Honeydew's historic one-lane bridge, which the county plans to replace soon with a two-lane version. Two lane traffic might make the town's lone stop sign obsolete. If it goes, drivers would no longer even have to pause in front of the store. Shinn resolves to meet all changes with equanimity.

It remains to be seen if the customers will.