This year's Mad River Festival kicked off on a rather different note than previous years. Instead of the usual biting satirical drama, Dell'Arte is celebrating someone who's been a key part of more than 50 Dell'Arte productions in Blue Lake and around the world. Indeed, if you've listened to any music created, recorded or performed in Humboldt over the past 20 years, you've probably experienced the work of award-winning composer, producer, recording engineer and all-round soundscape generator Timmy Gray.

Dell'Arte Producing Artistic Director Michael Fields and Gray first met when Dell'Arte performed the eco-thriller Intrigue at Ah-Pah at a California Conservation Corps camp in Crescent City, where Gray was working back in the 1990s. Over the years since, the two became close collaborators, working on everything from 1997's Journey of the Ten Moons to Grand Guignol in Sweden to Mary Jane: The Musical, not to mention sharing a goodly number of cigars and glasses of Redbreast Irish whiskey. In between Dell'Arte shows, Timmy found the time to produce albums for local favorites, including Lyndsey Battle and Home Cooking, as well as play in local bands like Lance Romance, The Bayou Swamis, the Joyce Hough Band and Barking Dogma (named for his Loleta recording studio). 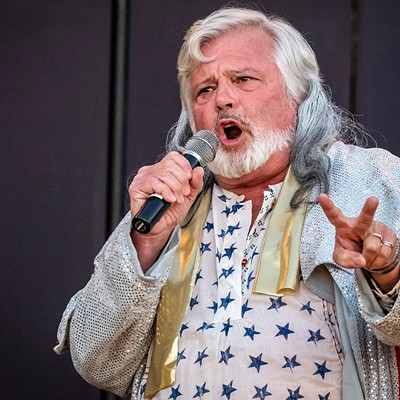 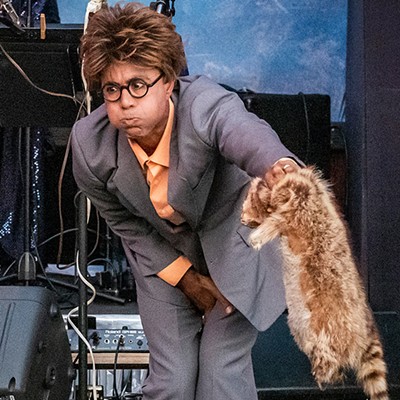 A couple of years ago, Timmy was diagnosed with corticobasal degeneration, a rare degenerative brain disorder for which there is no cure. So the decision — some might say long-overdue — was made to stage a multi-night celebration of everything Gray has brought to Humboldt over the years, and to Dell'Arte in particular. The result, Turning Gray Skies Blue, is about as perfect a soundscape of Humboldt County as one could imagine: 16 songs from 10 of Dell'Arte's signature productions, performed by some of the company's greatest players and supported by the amazingly versatile house band of Marla Joy, Jeff Kelley, Mike LaBolle and Tim Randles.

The evening's songs showcase Gray's versatility, from opera to country and rap to rock. They're drawn from Mad Love, Crawdaddy, Blue Lake: The Opera, La Bottega da Caffe, In the Land of the Grasshopper Song, Wildcard, The Rag and Bone Shop, Mary Jane: The Musical, Comedy of Errors, and Paradise Lost: The Clone of God, Fragment #1. All were scored by Gray, with lyrics by Gray and Lauren Wilson.

The show is directed by Fields, with scenic and costume design by Lynnie Horrigan, lighting design by Michael Foster, sound mixing by Russ Cole, technical direction by James Hildebrandt, and production/stage management by Kaitlyn Samuel Rosin and Roman Sanchez.

It's an emotional rollercoaster of an evening, with moving tributes from performers and audience members alike. Best of all, the man himself was able to attend — thanks to the support of his caregivers and La Famiglia friends — on the opening night of the 2019 Mad River Festival.

So raise a glass to the creative genius of Timmy Gray, Humboldt County's first Knight of Musicality, as he has been dubbed. And get yourself a ticket to next weekend's performances of Turning Gray Skies Blue.

Dell'Arte's Turning Gray Skies Blue: The Music of Timmy Gray shows Friday and Saturday, June 28-29 at 8 p.m. in the amphitheater. Visit www.dellarte.com or call 668-5663. For the full Mad River Festival schedule, see the website and the Journal's Calendar.

The Carlo Theatre gets glitter bombed by local performers for The Best Drag Show Ever on Wednesday, July 3 at 8 p.m. Visit www.dellarte.com or call 668-5663.

On Tuesday, July 2 at 8 p.m., Dell'Arte's Carlo Theatre hosts Mad Labs, featuring Imprints and Under the Stars, pieces about violence against women and epic fails, respectively. Visit www.dellarte.com or call 668-5663.

How about a noir mystery played out by zoo animals and based on the true story of a murdered hippo? Forgive Us, Gustavito! plays at the Arcata Playhouse July 5-7 as part of the Mad River Festival. Visit www.dellarte.com or call 668-5663.

Saucier fare is served July 5-7 at 10 p.m. at the Carlo Theatre when the annual Red Light in Blue Lake: An Adult Cabaret shimmies onstage. Visit www.dellarte.com or call 668-5663.