Latkes and doughnuts for the Festival of Lights 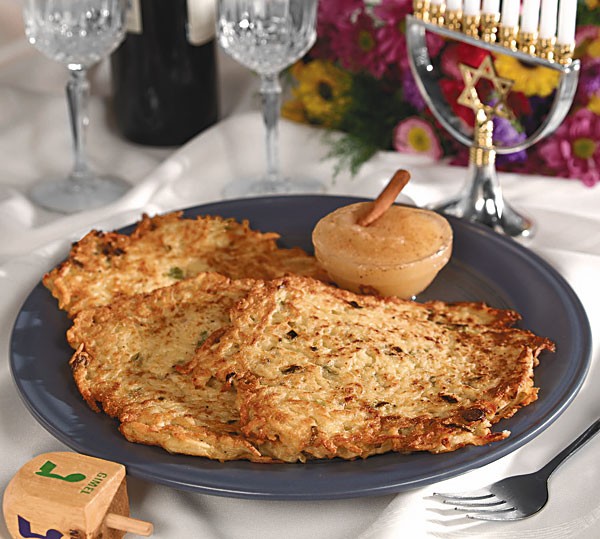 I love this time of year. I love to cook and to eat. I love to hang out with friends and family and play and cook and eat. I love that everyone makes time for each other. I love to heat up the oil and sizzle those latkes and eat them. I love pouring the wine and making the blessing around my dinner table in the glow of the Menorah. I love a holiday centered around the miracle of light when the world is its dampest and darkest. I love preparing the foods of my childhood. And, did I mention -- on this holiday -- I love to eat?

Hanukah originated when Judah the Maccabee and his followers reclaimed the Temple in the village of Modi'in from Syrian King Antiochus IV in 165 BCE. They found only one small flask of sacred oil to light the Menorah. Miraculously, the one-day supply of oil lasted for 8 days, until more could be prepared. In remembrance, a candle is lit each of the eight days of Hanukkah, each an opportunity to come together during these early dusks with loved ones and share meals.

It is traditional to eat fried foods on Hanukkah because of the significance of oil to the holiday. The light in the Temple, the N'er Talmid, represents the Eternal Light that never goes out, which is why the oil lasting until more was prepared was so momentous. So we eat latkes, potato pancakes made from grated potatoes mixed with eggs, onions and flour and fried in oil. The Maccabbee soldiers ate latkes made from cheese, vegetables or fruit that was brought to them on the battlefield. Latkes were not made out of potatoes until the 1600's when potatoes became readily available -- aha! -- making the most prominent festival food locavore with potatoes readily available this season here, too.

Since leaving my brethren in New York left me to make my own holiday meals, I have added other local foods to our family repast. Along with latkes and the customary Jewish elixir, matzoh ball soup, (recipes in Table Talk, 4/9/09), I count sautéing in olive oil as frying. Sautéed turnip with seckel pear is to die for. The key is slicing the peeled turnips very thinly, along with thin slices of garlic and being patient enough to turn them over with a spatula until the turnips are almost soft, before adding sliced pear into the mix. The Co-op carries the tiny pears from Washington, but I have used many kinds of local pears, along with the addition of sliced apple from our tree. Although I begin with the turnips in olive oil, I add a little butter (or Smart Balance faux butter), when adding the fruit, cooking over medium heat until all is cooked through.

Sautéed chard with garlic and browned onions, or sautéed spinach with garlic and tamari, a dollop of Cypress Grove chevre dropped atop each serving of warm winter greens balances the heavier dishes.

Latkes are served piping hot with sour cream or apple sauce that I make with our apples, simply slicing the cored, peeled apples and cooking them down over medium heat in a heavy saucepan with water and a scant handful of white sugar. Some nights we have apple-pancakes, adding slices to our whole wheat pancake batter or Los Bagels' challah for French toast, both served with honey (try Reed's Bee's Sand Dune), in the spirit of the ancient Hebrews.

A story from the Apocrypha tells of the beautiful widow Judith who plied enemy Assyrian General Holofernes with cheese and wine until he fell into a drunken stupor. Judith beheaded the general in his sleep, and his soldiers fled in fear, saving her people from the Assyrians. I haven't tried to make the traditionally served fried cheeses, but stuff small chunks of the sweet Lamb Chopper or Loleta garlic Jack into dried figs or large green olives to fulfill the cheese eating directive.

During the Middle Ages the widespread custom of giving coins or gelt during Hanukkah, in remembrance of the coins minted by the new independent Maccabbee state, made it possible for the poor to get enough money to burn their candles during Hanukkah. Today children receive gifts of gelt -- gold foil-covered chocolate coins -- reminding us of freedom and to share. Gleefully, I include chocolate as a Hanukkah food, unless it's jelly doughnut night. I saved this for last, a chance to eat jelly doughnuts called sufganiot! (See recipe below.)

So put the oil in the pan, sizzle the latkes, and dish out the apple sauce. Because that is the biggest miracle of all. The changing of the seasons that brings us the sustenance from our gardens. I have always enjoyed celebrating Solstice and Hanukah together, the miracle of the dark and the light and the turning of the Earth that humans have observed with festivals since time immemorial. In their great wisdom, the ancient rabbis placed their Festival of Lights at the darkest week of the darkest month of the year. What better time to feel the glow.

Alternate the potato with the onion while you shred in order to keep the potatoes from oxidizing.

salt and pepper to taste

In a large bowl, stir together potatoes, eggs, onion, flour, salt and pepper.

To squeeze out the potato mixture, place it in a piece of cheesecloth and squeeze it.

When you cannot get any more liquid out, open up the cheesecloth, stir the mixture around a little, and then squeeze it some more

Heat oil over medium high heat in a large skillet. Drop large spoonfuls of the potato batter into the skillet and flatten cakes slightly with a spatula. Cook until golden brown, for about 4 minutes on each side. Serve immediately

1/4 cup plus 1 teaspoon sugar, plus more for rolling

In a small bowl, combine yeast, warm water, and 1 teaspoon sugar. Set aside until foamy, about 10 minutes.

Place flour in a large bowl. Make a well in the center; add eggs, yeast mixture, 1/4 cup sugar, butter, and salt. Using a wooden spoon, stir until a sticky dough forms. On a well-floured work surface, knead for about 8 minutes, until dough is smooth, soft, and bounces back when poked with a finger, (add more flour if necessary). Place in an oiled bowl; cover with plastic wrap. Set in a warm place to rise until doubled, 1 to 1 1/2 hours.

Punch or flatten down, then pinch off pieces and form into small balls, about the size of golf balls

To fill, make a small opening and spoon in jam or jelly. Roll in sugar while warm.