A homeless services center wants to move, but it can't escape controversy 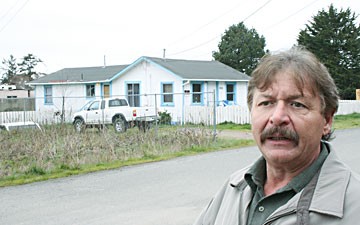 It's a question that's been nagging the city of Arcata and those who run the nonprofit Arcata Endeavor since the organization formed nine years ago. What's the best place to offer services for those who are most in need, who don't have the money for food, who don't have a place to sleep or bathe or even to use toilet?

After years of searching unsuccessfully for an appropriate place to move from its location near downtown, the Endeavor has come up with a tentative plan for a new location, but it's not getting rave reviews.

In a last-ditch effort to establish what is called "site control," the organization recently announced that they'd signed an agreement with former City Councilmember Dave Meserve to purchase two parcels at the end of St. Louis Road, next to the Craftsman's Mall.

Establishing site control will allow the Endeavor to apply for Community Development Block Grant (CDBG) funding that would help pay for the property and finance a new building. Site control is also required to apply for a Federal Emergency Shelter Grant (FESG) to fund program services, facility construction, rent and any costs related to its program mission: moving the homeless into permanent housing and helping them transition to independent living.

Will the council sign off on the plan at a Wednesday, March 19, meeting? It's not likely if they listen to residents living near the proposed site, who organized opposition almost overnight. An ad hoc neighborhood group called the Coalition of Arcata Families for Appropriate Community Planning claims it has over 300 signatures on a petition against the move.

NIMBY-style opposition has been a constant according to Endeavor board member Rudy Ramp, who got involved with the Endeavor when it was a small organization distributing food boxes, government commodities and whatever else they could find, at the Arcata Presbyterian Church. When the operation outgrew the church, it approached the city for help finding a new location and securing CDBG funding. When the city faced resistance for every site suggested, it ended up settling on the current location between the ballpark and the intermodal transit facility, land the city already owned. A five-year lease was signed in 1999, with the idea that the Endeavor would move to a new place when it ran out.

"We never gave much serious consideration to finding another site until the lease agreement was about up," said Ramp. In 2004, the city gave the Endeavor a two-year lease extension and more CDBG funding ($500,000) and resumed its search for a new site.

Endeavor board president Roger Herick explained during a March 11 meeting at the Arcata Presbyterian Church that the search did not go well.

"The city failed," Herick said. "That left it to us." The half-million dollar grant had to be returned, Herick told the assembled crowd, most of it from the Janes Creek subdivision near the St. Louis Road site.

Earlier this month, ongoing efforts to secure a new site failed once again. In closed negotiations at the beginning of two City Council meetings, city officials met with Realtor Kerry Rasmussen, one of the owners of Arcata Bay Self Storage on South E St.

According to Rasmussen, the deal did not fall through because of NIMBY issues — in fact, the neighbors were never notified that a potential deal was in the works. The two sides simply failed to come to an agreement on price.

That left the Endeavor "between a rock and a hard place," as the nonprofit's director, John Shelter, put it at the meeting in the church. Without site control the group can't apply for CDBG funding, or for the FESG grant it needs for operating funds. While the neighbors who came to listen and state their worries all said they supported the Endeavor's efforts, almost no one supported moving the service center to St. Louis Road.

"There's an element that has surrounded your operation, that's why the city is getting rid of you guys, and that can't be brought into our neighborhood," said Janes Creek resident Jonathan Speaker from the Coalition of Arcata Families. "I'm going to fight tooth and nail to prevent it."

Bonnie McGregor, who lives at the foot of Maple Lane, spoke to pre-existing problems with foot traffic on trails in the neighborhood. "My home was broken into two months ago," she said. "Two men on foot going through that area tried to get into my house at 2:30 in the morning. So I am really concerned about this. What your doing is commendable, but it's a poor place to put this in the middle of a residential community."

"Their concern is for the safety of their children," said Shelter, when he took the Journal to see the proposed site the next day. "If we're here, how will that impact them? I think they have preconceived notions how it's going to affect them. And I can't deny any of that. How can I say what's going to happen? But what we can do is work closely together to make sure things don't happen."

He talked of mitigating problems with trails that lead into residential areas, limiting programs and of a shift in focus for the Endeavor.

"As a matter of fact, since I started working there, our programs have moved away from the general population of the homeless," he said. "We're working more with the homeless population that doesn't want to be homeless. There's a big difference there."

He doesn't want the service center to be what he termed "enablers" for those who are homeless by choice. "We don't want to work with the people who choose to live outside and survive by using services," he said.

As if on cue, three dogs and six young men with backpacks came walking down the railroad tracks that pass right by the proposed site. "Those are your town drunks," said Shelter. "Those are the people we don't like, the people who are chased out of every place and find little cubby holes."

What will happen at the city council meeting on Wednesday? CDBG funding is on the agenda. Undoubtedly, the Coalition of Arcata Families will call for rejection of the St. Louis site. The council will also vote on extending the Endeavor lease.

"Some of the council members have said, 'If you have site control, it will be easier for us to support a lease extension,' " according to Ramp. "We would expect if we don't have site control they will definitely vote against it."

That could make the homeless services center homeless come October, with winter on its way.

Or would it? What's the backup plan? "We've already had some churches assure us that if we have to close our operation where we are now, they would take us in," said Ramp. "We wouldn't be able to do all the services in one place. We'd probably need to spread out between two or three locations."

Specifically, Sunny Brae Church and the United Methodist Church on 11th Street have stepped forward, and they're talking with the Arcata Presbyterian Church, where the whole thing started.

"It would be a difficult set-up," Ramp conceded, "and people would be walking all over town — talk about having it in your neighborhood."

According to Arcata Community Development Director Larry Oetker, the churches are already permitted for such services, as long as numbers are not too high, so there would be no stopping it. The alternative, finding yet another acceptable site, would likely face more NIMBY fears.

Is there any place to locate the Endeavor where the neighbors would not complain? Before Shelter departed from St. Louis Road, he answered the question with a smile and another question: "You got a piece of property on the moon?"