by David Simpson and Jane Lapiner 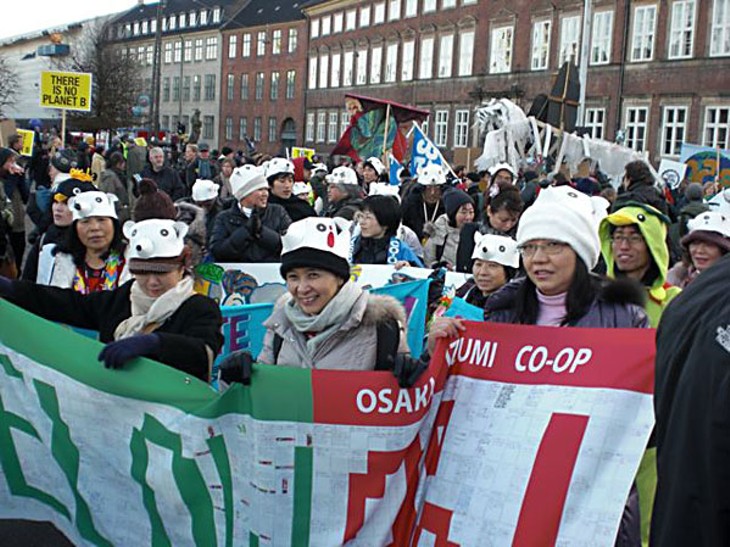 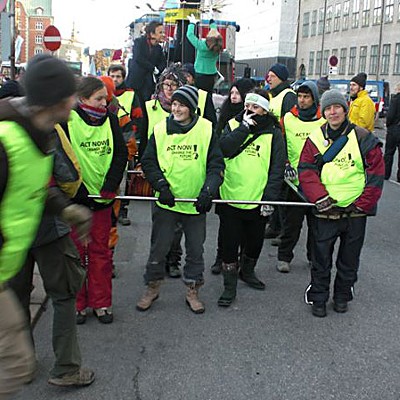 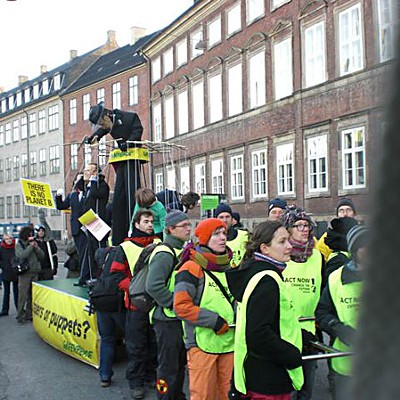 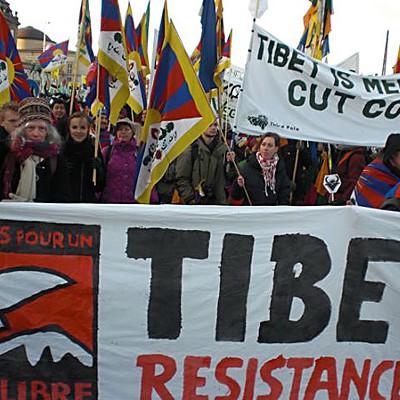 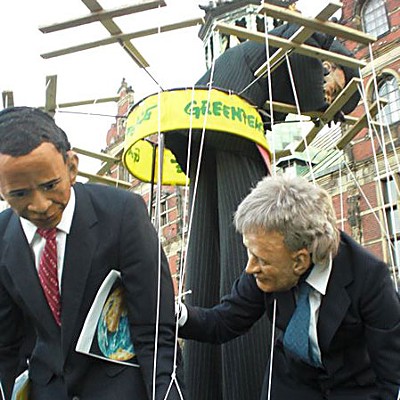 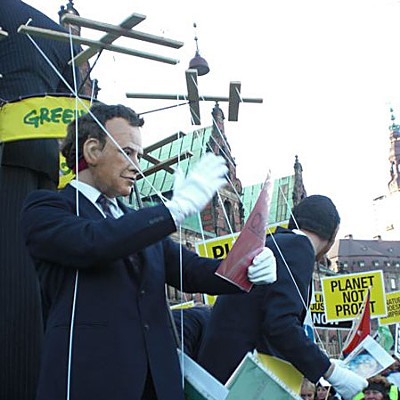 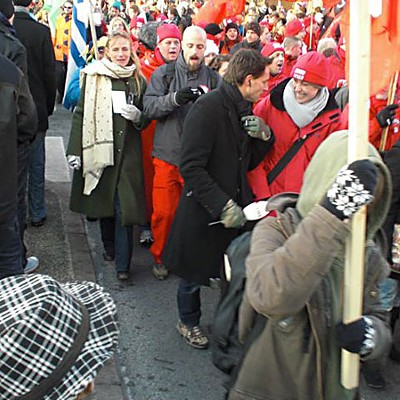 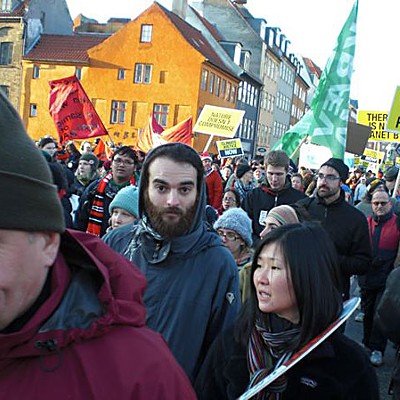 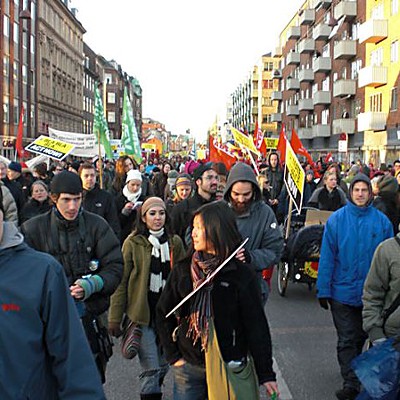 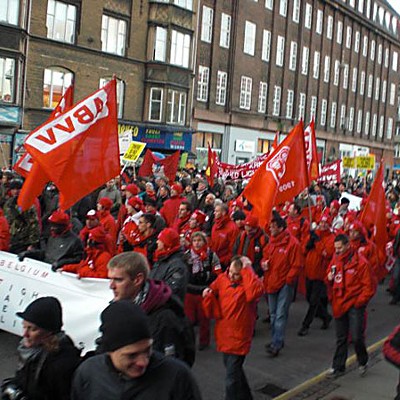 It would be an exaggeration to say that Copenhagen was a city under siege at the beginning of this, the last week of the COP 15 climate conference. Certain streets were closed off to vehicles to allow for Christmas shopping. Teenagers, young couples and families walked briskly through the semi-dusk past stores and cafes -- climate worries seemingly absent from their shopping sanctums. On the open streets, though, signs of a city in the throes of a major contortion were everywhere. A steady stream of police vans, sirens shrieking, rushed by with annoying regularity. Helicopters hovered overhead. Protests, art events, concerts, and rallies seemed to be breaking out like infestations, spreading through the city at this mid-point in the United Nations climate negotiations.

So far, Copenhagen's police have detained more than 1,200 people, often through a tactic they call "kettling." They surround a crowd of people, a few of whom might have thrown stones, and handcuff those caught in the "kettle," usually for 12 hours before release. This right to hold people briefly without charges is peculiar to Danish law. Fewer than 50 people are still being held to stand actual charges.

Saturday's big march brought at least 50,000 people into the center of the city, gathering at Parliament Square before marching countless kilometers to the vast Bella Center at the city's far eastern edge, where the climate conference was in progress. It was an ebullient crowd made even more joyful by the beauty of the crystal clear, pre-solstice day and a great show of color and costume. Groups from one allegiance or another gathered together, often dressed in the same color, sometimes boisterously singing or chanting in rough unison. The city itself is festooned with climate change pronouncements and symbols. Green globes sprout like rainbow mushrooms in city squares. Three-story-high banners herald related events. Giant photos of COP President Connie Hedegaard are widespread. Billboards and sign posts have renamed the city Hopenhagen.

At the Bella Center itself attendance has grown almost exponentially. Old climate conference hands warn that everything boils down to the last day, when heads of state or top level ministers arrive to negotiate or sign off on the final agreement that, ideally, this conference will produce. It's almost impossible at this stage to say which countries' positions are firm and which are complex gambits meant to torque considerations a little this way or that.

Still, things look a little bleak right now. The conference is split in so many directions that it's hard to see the clear lines though. For the most part, it seems to be the rich countries versus the poor, with China, India and Brazil, at least, in a no man's land between. Many of the developed nations are still rankling at the emissions targets that they signed onto with the Kyoto Treaty, and they are reluctant to commit adequate financing to help the poorest nations implement clean energy technologies.

What frightens many is that the only binding environmental commitments ever made by the world's major nations (minus the U.S., which never signed on) are now in jeopardy. If the developed nations were to force the abrogation of Kyoto before something equal or better was in place, we'd be pushed back, at least temporarily, into the no man's land of potentially runaway CO2 emissions and the certain mayhem on land and peoples that would follow. If we were to go only with what's firmly agreed to now, with all the loopholes and questionable commitments, we would still be doomed to an overall 3.9 percent increase in worldwide emissions, some experts predict. This would push us quickly past the G-8 nations' established, if dubious, temperature increase threshold of two degrees Celsius above pre-industrial levels.

Residents of the remote island nation of Tuvalu are convinced that if global temperatures are allowed to increase more than 1.5 degrees Celsius, they will be doomed to inundation by the rising sea. Many other low-lying countries share that fear, and a number of African nations are already in deep distress from drought and other climatic events.

At the conclusion of a press conference Friday, the head of the U.S. negotiating team, Todd Stern, was on his way out when he shot off a response to the final question of the briefing. "We can't get to 1.5 degrees. We have to settle for 2." It was dropped almost in passing by a representative of the great power that alone had refused to enter into the singular treaty dominating these negotiations. Given the style with which he tossed it off, it was hard to grasp its grim portent: Goodbye Tuvalu. So long Sudan. It was fun while it lasted. You should have migrated north when you had a chance a few thousand years ago. Now who's next?

As celebrities and heads of state start to show up, pressure on the streets and in the enclaves of climate activists builds in direct proportion to the diminishment of hope for a strong agreement at the Bella Center. Honed over decades of oppositional struggles, activists have been held in check by the knowledge that we are all on the same side, that unlike the 1999 WTO protests in Seattle, there is common purpose between negotiators inside the center and protesters out in the cold streets. Were that commonality to be challenged by a deal that compromises developing nations, the whole spirit of events could rapidly change. The good people of Hopenhagen, engrossed in their peaceful preparations for the coming holiday, should keep hope in their hearts...that things end well at COP 15.

David Simpson, Jane Lapiner and Dan Ihara are covering the United Nations Conference on Climate Change for the North Coast Journal. For a photo gallery from the last week of conference proceedings, visit northcoastjournal.com.